Pete Salmansohn started with fish, as an angler. Connie Mayer-Bakall started with wolves, as an educator. But after decades of enjoying the outdoors, each was drawn to birds.

“There’s something comforting and soothing about realizing that while our whole world has gone crazy and surreal, the birds are still doing what they’ve done for millions of years,” says Mayer-Bakall, president of the Putnam Highlands Audubon Society, after checking the feeders in her yard. (Current sightings: Four rose-breasted grosbeak males and a couple of females, blue-winged warblers, an indigo bunting, and a northern oriole.)

Adds Salmansohn, a longtime board member: “It’s shocking how something that weighs less than a 50-cent piece can travel thousands of miles.” 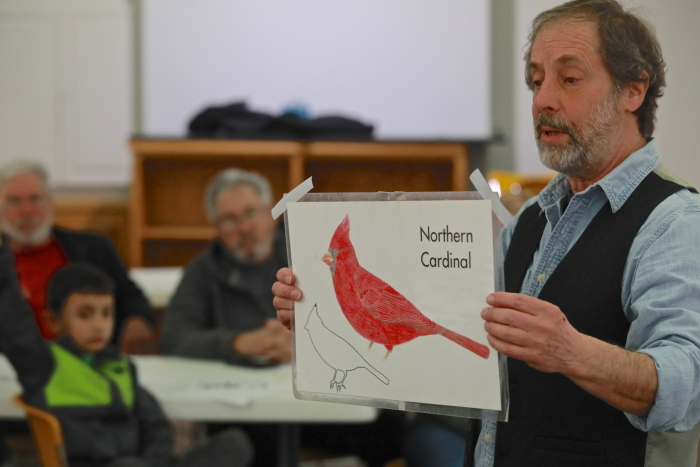 Pete Salmansohn explains the characteristics of the northern cardinal during a birding seminar in Garrison last year. (File photo by Ross Corsair)

I also frequently enjoy the outdoors, but the only birds I can identify are the ones that have baseball teams named after them. With the mountains and other outdoor destinations off-limits, the excursions I usually go on are to my back porch, where I gaze up at the Callery Peach tree in my yard as it’s visited by a variety of I-Don’t-Know-Whats.

I called Salmansohn and Mayer-Bakall, as well as Margaret DiBenedetto and John Thompson at the Catskill Center, for help.

I’m not the only one. Mayer-Bakall says her phone has been ringing a lot lately with requests for help identifying birds spotted in yards. Salmansohn said that in the past two months, Audubon memberships and binocular sales have gone up, and some popular birding books are sold out at Amazon.

Mayer-Bakall attributes this to the fact that, for those sheltering-at-home, time has slowed and become dreamlike. Routines have shifted and decelerated. We’re all looking out the window more. And we have questions. 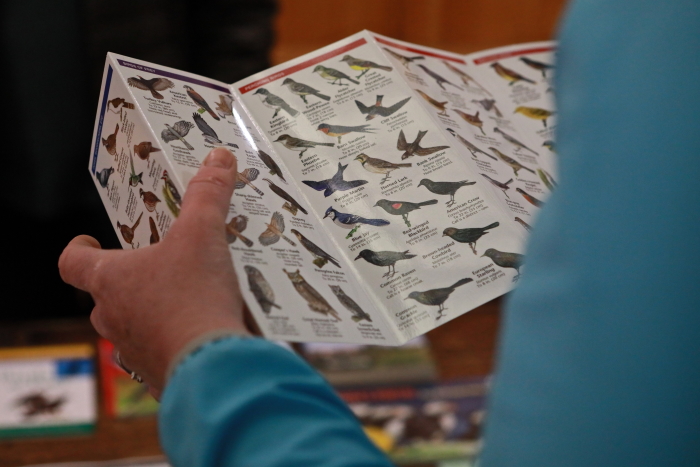 An attendee at a birding seminar held last year in Garrison studies a guide. (File photo by Ross Corsair)

“I always suggest beginning birders start with the birds you know,” she says. Walk outside or sit by the window and look and listen. Smartphone apps such as one by the Audubon Society or Merlin Bird ID can be used if a guidebook isn’t handy.

There are advantages to birding from home, said Thompson, whose small backyard and porch are filled with nesting brown thrashers, robins and house finches: A birder in a state park won’t see the birds’ routines, such as feeding, defending their territory or what shrub they’re nesting in.

Birding in parks lends itself well to social distancing, and Foundry Cove, Denning’s Point and Madam Brett Park are all great places to do it. (The trails at the Constitution Marsh Audubon Center, another local haven, are closed.) Because the Highlands has so much protected land, it attracts many birds, which means many also end up in backyards.

It’s the same in the Catskills, Thompson said, which has many larger forests that aren’t found in most of the eastern part of North America and attract species not seen elsewhere. One example is the Bicknell’s Thrush, which can be found near the summits of Slide and Hunter Mountains because of their higher elevations.

The chance to spot one is usually one of the big draws of The Catskill Center’s annual Taking Flight festival in May. But just like the Putnam Highlands Audubon Society’s annual Birdathon scheduled for this past weekend, the festival was postponed to 2021 because of the COVID-19 shutdown. DiBenedetto would like to again use this year’s theme — Flock Together — and hopes it will be more applicable. 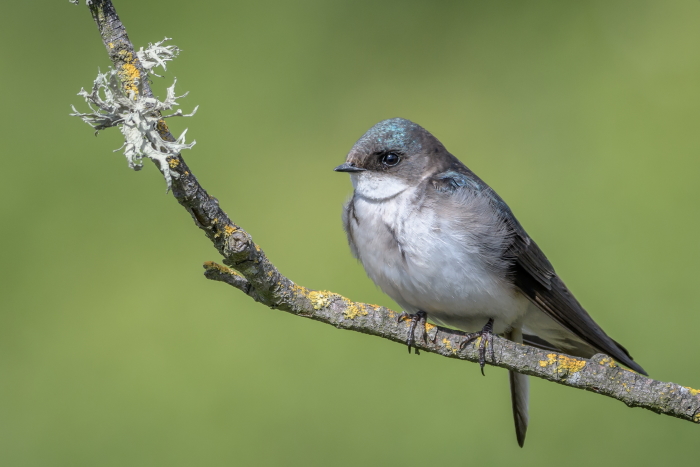 Molly Adams, the founder of the Feminist Bird Club, was going to be the guest speaker, DiBenedetto said, with the goal of getting birders to think about diversity, accessibility and inclusivity. In other words, how do you entice people to try birding who aren’t retired, older white people? “It’s about opening it up,” she said. “This is an excellent activity if you don’t feel comfortable in crowds.”

I thought about the sense of connection birders have with nature the other day as I went for a run at dusk through Madam Brett Park, when the trails are usually empty. An iridescent blue bird shot across the trail and landed in a tree. Being a new birder who had just installed Merlin Bird ID on my phone, I stopped and made a few pokes and swipes. I was staring at a tree swallow, which had traveled hundreds if not thousands of miles from the south for breeding season. The app said that this time of year, they are common here. I had never noticed.