Jeffrey McDaniel recently sat down 6 feet away from Alison Rooney in his Cold Spring backyard to talk about his sixth collection of poems, Holiday in the Islands of Grief, which was released earlier this year by the University of Pittsburgh Press. In March, one of his poems was published in The New Yorker.

McDaniel, who has lived in the village since 2006, grew up in center city Philadelphia and attended Sarah Lawrence College. Since 2001 he’s been on the faculty there, teaching creative writing. He attended his first poetry reading in 1993 on a lark and six months later was competing at the National Poetry Slam. 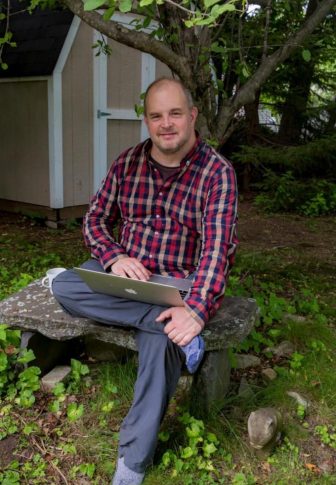 Jeffrey McDaniel, photographed near a shed which makes an appearance in a few of his recent poems. (Photo by Quyen Nyugen)

This collection feels like it has a narrative structure. Was that intentional?

The third section has poems written in 2018 — that year it felt like November was six months long — and into 2019. It’s about Cold Spring, about things that happened here. Page 65 is the day after Halloween. Page 68: I’m painting this shed, here in my yard. The poems are different from anything I’ve written. They’re informed by grief, and they’re connected to mundane rituals: talking walks, observing the Hudson Valley. One relates to a wooden bench in the funeral home up the street. A few take place on the train. In some of my other books, the poems were rooted in the soil of the imagination; in this book they’re rooted in the soil of experience.

When this book was going to print, in October, another of my childhood friends died, and I was asked to eulogize him. It was almost like he wanted to be included in the book. I wrote a piece for him, kind of a prayer. So this collection wasn’t complete until that poem went in.

When you come up with a great combination of words but find it doesn’t work in the poem you’re writing, do you stash it somewhere?

Is there a specific Philadelphia style of poetry?

I don’t think there’s a “Philly style,” but many poets I know come from there and were born in 1967 or 1968, like me — so that’s interesting. Philadelphia maybe has a pugnaciousness and a chip on the shoulder and a provincialism, but I’m not sure it’s in the work.

Do you worry about being a middle-aged white-guy poet? Are you relevant?Well, let’s wait and see. 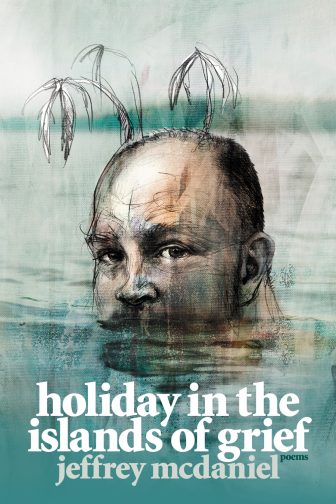 Jeffrey McDaniels’ most recent collection of poems, with cover art by Jasmin Siddiqui

You have a teenage daughter who is old enough not only to read your work but to learn about her father from it. Do you ever hold back?

There are a number of prose projects I’m working on that include parenting and basketball [a shared passion]. I think about how she’s being depicted because it’s complicated for a parent to write about their child because the child doesn’t have a say in it. I’ve not held back, but now there’s a difference between who I am and a character I might write in a book. Whenever you write, at some point you do think about how is something going to play — not just to my daughter, but to the world. As you become older and maybe even whiter, with time, as society changes, the way you relate to certain subjects might change, as well.

Does grief offer any surprises to a poet?

It feels private and like being submerged in something. I don’t know that you can prepare for it.

You’re teaching online. Has that been difficult?

It’s not ideal. But writing translates to online experience better than other subjects. Some students kept going without missing a beat, others had a harder time. If we have to do it in the fall, we’ll read shorter books, and we’ll keep workshopping. If you’re discussing a single piece of writing, such as a poem, that works fine.

Is a pandemic handy in any way for poets?

It’s been a terrible time to have a book published. Mine shot out into a void. I was going to do readings in eight cities, including Chicago, New York City, Los Angeles and here, at the Chapel Restoration, where I love reading. What we’re in has been not so devastating that people can’t write; it actually is a good time to write. 9/11 was bad for poets, but 2020 is already good, maybe because writing is one of the things you can do alone. The poets need to rise to the occasion.

We are underwater off the coast of Belize.

The water is lit up even though it’s dark

as if there are illuminated seashells

scattered on the ocean floor.

yet staying underwater for long stretches.

We are looking for the body of the boy

we lost. Each year he grows a little older.

Last December I opened his knapsack

and stuck in a plastic box of carrots.

Even though we’re underwater, we hear

a song playing over a policeman’s radio.

He comes to the shoreline to park

and eat midnight sandwiches, his headlights

fanning out across the harbor.

And I hold you close, apple of my closed eye,

red dance of my opened fist.