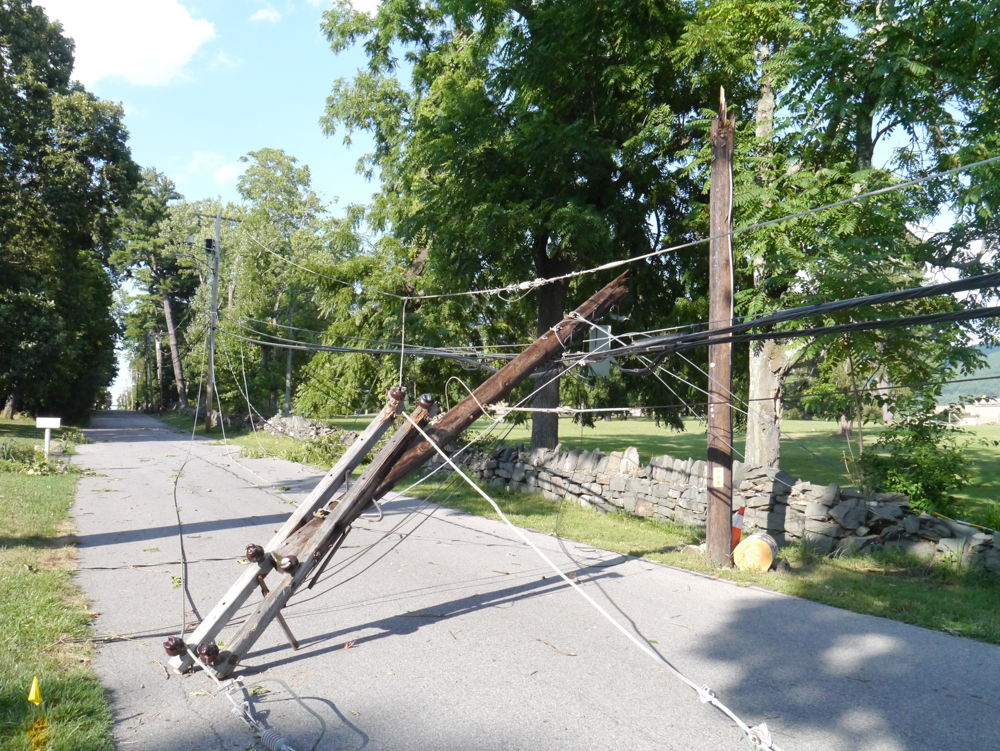 Many power lines were disrupted on Aug. 4 by falling trees, including this one taken down on Sargent Avenue in Beacon. (Photo by J. Simms)

The electric, cable and internet services of Central Hudson and Optimum customers were not the only things disconnected when Tropical Storm Isaias ravaged the Highlands on Aug. 4, according to an initial state Department of Public Service investigation of their performance.

In separate “notice of apparent violations” letters dated Aug. 19, the department said its review so far has found that Central Hudson and Altice USA, the company that owns Optimum, violated state law and Public Service Commission orders by failing to have enough personnel and equipment to restore service to customers after sustained 40-mph winds and 70-mph gusts inflicted heavy damage on utility poles and power lines and conductors in the Highlands.

Altice is also accused of not having enough workers to restore cable TV and internet service to 400,000 customers and of waiting six days after the storm to begin a “coordinated outreach” to local officials.

On Monday (Aug. 24), Gov. Andrew Cuomo said he intends to propose legislation increasing fines on utility and telecommunications companies, which start at $100,000 per violation and rise to $500,000, while streamlining the process for revoking a company’s operating license for repeated failures.

“We know these storms are going to happen; we don’t pay for utilities to function on a nice day,” said Cuomo, who earlier this month ordered the Department of Public Service to investigate the preparations and response to the storm by utilities and telecom firms. “The essence of what we pay for is be ready for a storm — give me information when my power goes out and get it back on quickly.”

Dutchess County Executive Marc Molinaro said that two weeks after the storm the county was still notifying Altice of outages “they seemed to know nothing about.” He called the company’s performance after Isaias “the worst I’ve seen in my 25 years of service.”

On the day of the storm, Central Hudson requested 200 line-workers from the North Atlantic Mutual Assistance Group, a consortium of 21 utilities in 21 states, four Canadian provinces and Washington, D.C. After the group sent only 16, Central Hudson should have pursued “any means possible, including additional contractor personnel” to get more workers, the state said.

Central Hudson’s website was also down for more than eight hours between Aug. 4 and 5, leaving customers unable to report outages or get information on restoration estimates, according to the state.

“The utilities were not prepared and that is just not acceptable,” Odell said. “Not having access to a reliable power source is more than an inconvenience. For many, it is a matter of life-and-death.”

When the Philipstown Town Board met Aug. 13, Supervisor Richard Shea and Councilor John Van Tassel mentioned Central Hudson’s seemingly lagging response, though Shea noted that a fire at a power-generating station during the storm probably compounded the difficulties.

“Generally, they’re better than this,” Shea said, adding that “it isn’t acceptable to have your power out for a week from one storm. This is not winter.”

John Maserjian, a spokesman for Central Hudson, called the storm a “force of nature” that was the “fourth most-damaging” in the region’s history and hit hardest in southern Dutchess and Orange counties.

More than 700 workers were in the field, with service restored to 50 percent of impacted customers in the first day; to 75 percent by the second day; 98 percent by the third day, and everyone by the fourth day, he said.

An Altice official did not respond to a request for comment.

As part of the state’s approval of Altice’s purchase of Cablevision in 2016, the company was required to upgrade its systems, including backup customer support and power, to better respond to storms and outages, and to open its Wi-Fi network to all customers “without charge” during federal or state emergencies, according to the Department of Public Service.

The DPS said that on Aug. 11, seven days after the storm, it asked Altice to provide the number of field personnel working on restoring service, but the company waited 10 hours to respond and then did not provide specifics.

The confusion extended to its customer service, according to the state. In the wake of Isaias, as customers sought information from Optimum.net and by phone, some were “waiting on hold for hours, sometimes only to be disconnected and have to begin the process over again,” according to DPS.

The state demanded that Central Hudson “immediately” begin doubling its personnel capacity by signing retainer contracts with private companies and out-of-state utilities, ensure its command, call and data centers can handle an outage affecting 90 percent or more of its customers and refine its coordination plans with municipalities in its service area.

Altice is also being told to take corrective measures, which include creating plans for getting additional personnel and equipment during and after storms, coordinating with local officials and communicating “timely and accurate outage information.”