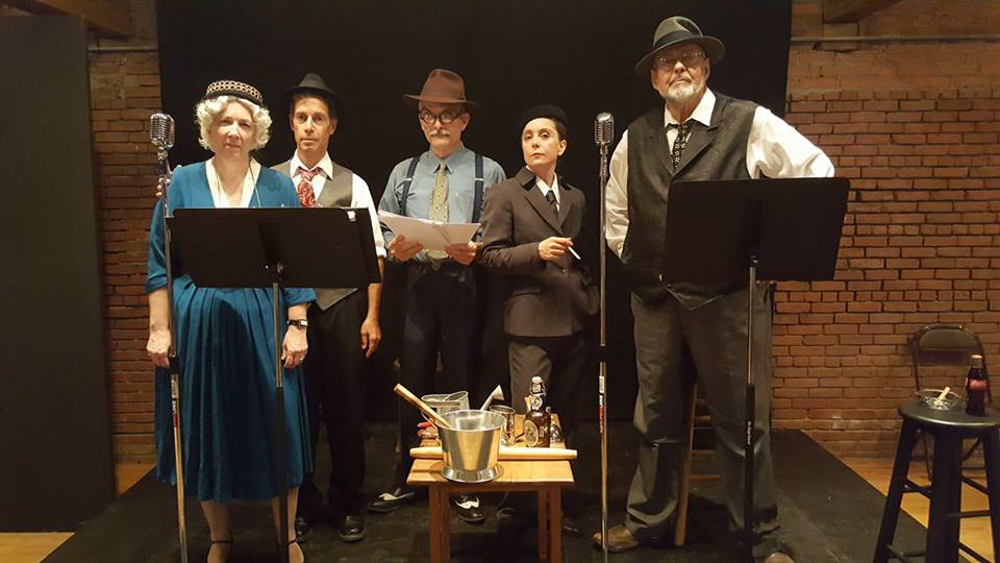 The cast of the theater company's live performance of the 1938 radio show, War of the Worlds (Photos provided)

With lack of bookings, theater company turns to radio

Past meets present, in a reconnection forged by a pandemic, at Murder Cafe.

Performances by the 11-year-old theatrical company, which is based in Ulster County and creates interactive, comedic murder mysteries at fundraisers and venues such as country clubs, casinos and, for the past five years, Bannerman’s Island, came to a halt in March. The company needed to reinvent itself quickly, recalls its co-founder and artistic director, Frank Marquette.

And so Hudson Valley Radio Theatre was born.

Instead of staging plays in person (the company does about 45 shows per year), the actors have moved to Zoom. They record their performances and sound engineer Kenny Drao produces the stories in ways that often evoke broadcasts from the Golden Age of Radio in the 1930s and 1940s. The Hudson Valley Radio Theatre roster of 12 programs is a mix of whodunits, a variety show and classic stories such as Wuthering Heights and Dracula.

Murder Cafe works with a rotating group of actors — last year there were 51 —many of whom made the transition from live performance to radio with guidance from Marquette.

“It’s a different way of presenting themselves, using voice only,” he explains. “You have to convey more emotion because you can’t use gestures or create drama with just a look. There are dramatic pauses but the actor has to rely heavily on the emotional range of the voice. There are differences in pacing, in this medium, and there are the technical challenges, but the actors have been great.” 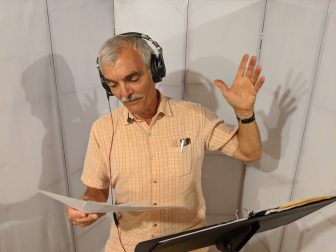 Once the actors have done their work, Drao inserts sound effects, enhances voices and gives everything a period flavor.

“We will end the year with 15 shows,” Marquette says. “After Wuthering Heights went so well, I now want to do programs which fit in with a school curriculum, especially high school, such as The Great Gatsby and Great Expectations.”

The company’s first production at Bannerman’s Island was An Evening with Edgar Allan Poe, followed by a version of the radio broadcast of H.G. Wells’ The War of the Worlds. Next came Whiskey Women, an original play about bootleggers; Dracula; and, last year, Arsenic and Old Lace. 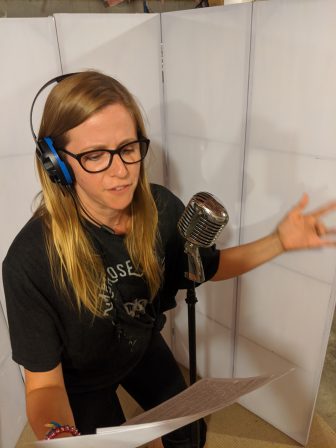 This year, the company was scheduled to present a play based on Frankenstein on the island, which is dominated by the ruins of a castle. Each show the company does is site-specific. “You have to make the surroundings part of the production,” Marquette explains. “At Bannerman’s you have trains, boats, geese flying over.”

He founded Murder Cafe in Las Vegas in 1998. “It was a case of ‘Go west, young man,’” he says. “I spent 11 years in Albuquerque and 11 years in Nevada. I was an advertising sales manager and graphic artist, while always acting. My wife and I got involved with a murder-mystery company. After we founded Murder Cafe, it took off; we did corporate shows along with lots of public shows. We moved back to the Hudson Valley in 2009, and it only took a year to get back to the number of performances we had been doing in Las Vegas.”

To promote the performances, Marquette reaches about 8,400 people on an email list, publishes a monthly newsletter and posts on social media. The radio-show audio files are posted to sites such as Spotify and Anchor.fm. “All of this translates to what is now close to 1,000 listeners,” he says.

Once the pandemic is over, Marquette says he plans to keep the radio component active. “It’s kept our name out there, the actors love doing it and people are happy that we’ve given them an alternative entertainment medium,” he says. “I’ve had many conversations with clients — the people who run inns and other venues. No one wants to put customers at risk. I’ve been asked to perform live, but it’s too risky. We’ll just wait.”

To listen to any of Murder Cafe’s performances, including Murder Me Always; Murder at the Speakeasy; Death by Chocolate; Murder on the Air; Sorry, Wrong Number; The Lodger; Ghost Hunt; The Masque of the Red Death; Poe Live; and The Virtual Variety Show, visit hudsonvalleyradiotheatre.com. The productions range in length from 16 to 85 minutes. They are free, but donations are welcome.