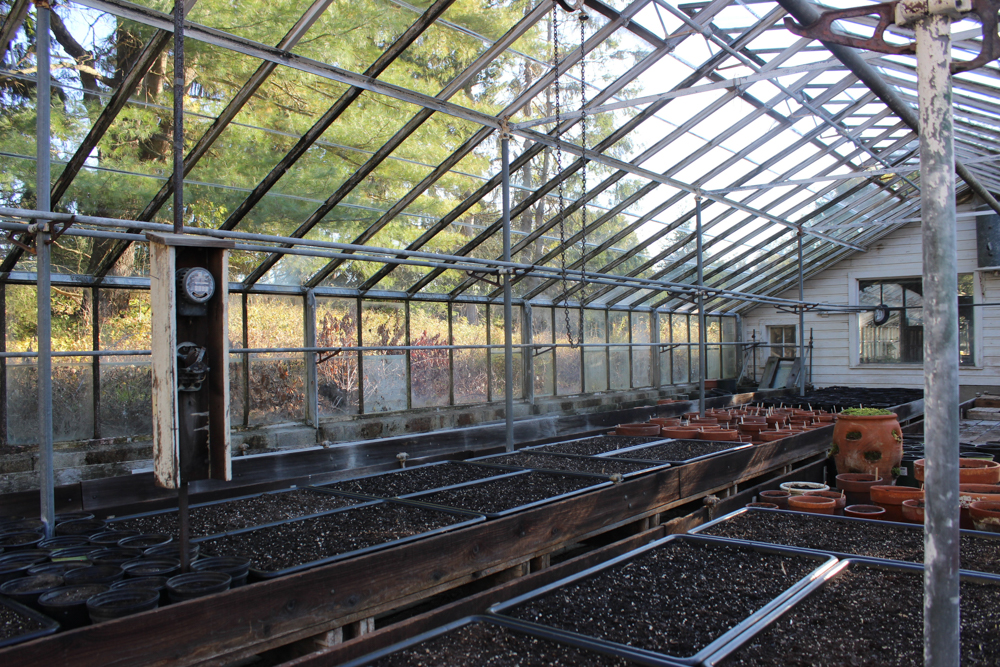 The large greenhouse is being given a clean-up, but otherwise will be left in its circa early 1950s original state (Photos by A. Rooney)

After closing her solo practice, dermatologist Hara Schwartz, who lives in Philipstown and is the mother of twin 7-year-old boys, says she craved a project — preferably a big one.

A friend, Hannah Milman, the former longtime craft editor for Martha Stewart Living, suggested Schwartz transform an abandoned greenhouse on the Route 9D property where Schwartz and her family recently bought a home, by growing saffron.

This is not as entirely out-of-left-field as it seems, because Milman is a steward of the New York Saffron Project, which is experimenting with the cultivation of saffron in New York City and across the state. Each location is named for its ZIP code, so once Milman had a look at the greenhouse — which was built in the early 1950s by Lord & Burnham — Experiment Station 10516 was born. 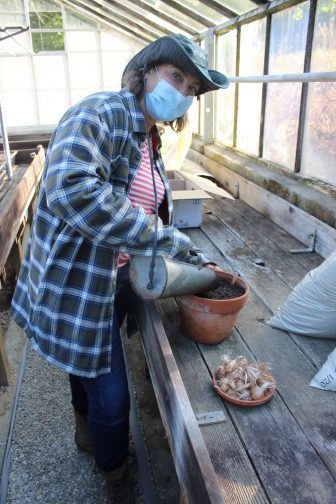 Schwartz and Milman will be selling saffron tea and plants at the Cold Spring Farmer’s Market on Saturday, Oct. 31. They will be joined by Laura Sansone, founder of the New York Textile Lab, who sells products dyed with locally harvested saffron and other plants.

Saffron, or crocus sativis, is a labor-intensive crop to harvest, which makes the spice expensive and limits its use in the kitchen. According to the North American Center for Saffron Research & Development, which is based at the University of Vermont, it is grown mostly in West and Central Asia and the Mediterranean region in places with low soil fertility and limited rainfall. (It’s most commonly associated with Spanish paellas and Mediterranean and Middle Eastern cuisine.) Until recently, scientists assumed that saffron could only be grown in colder regions in high tunnels, but research has proved otherwise.

Schwartz, whose family moved to Continental Village when she was in elementary school, was intrigued by the idea of becoming a saffron farmer and, with help from horticulturalist Brian Bergen, she dug in.

“I wouldn’t call myself a gardener, but I am a great student and enjoy learning,” she says. “I am attracted to the hard, manual work this project requires and I love getting my hands dirty.” After cleaning the greenhouse, she planted 2,000 saffron bulbs, which are known as corms. Most were planted in terracotta pots left behind in the greenhouse, and she and her sons also planted 300 in an outside garden. 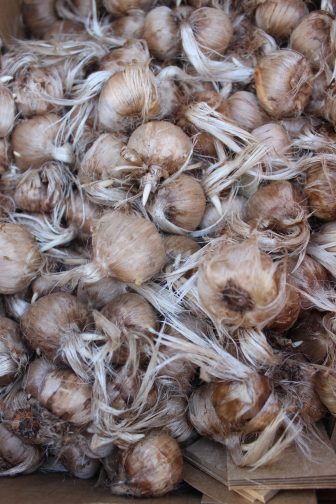 An abundance of saffron corms

“Unlike most crocus-type plants, saffron corms bloom sometime between October and November,” she explains. “Sprouts appear in September and October, followed by flowering. The harvesting of the three filaments, called stigmas, and the drying of the spice occur around October or November.”

Saffron leaves remain green and continue to grow over the winter. “From April through June, baby corms cluster around the mother corm, which dies in the late spring when the leaves turn brown,” Schwartz says. “The corms go dormant in July and August. My hope for the ones planted outside is that next year I’ll have 1,000.”

Schwartz says she wanted to restore the greenhouse for another reason: as a place for the community. “I love the idea of the community visiting the greenhouse, pulling on the long chain connected to the pulley system that opens all the windows and touching the old gardening tools that were uncovered in the cleanup,” she says. In addition, “I want to bring corms to local restaurants to plant, and they can use their saffron in their cooking.”

The greenhouse, which still has the original cypress holding the panes, has a long history. Two rear greenhouses and a potting shed were built by Henry Finck soon after his family purchased the home in 1932. Ron and Priscilla Richley bought the property in 1967 and ran H.G. Finck’s Florist for a year before renaming it Richley’s Country Florist for seven years and then changing the name to Everlastings Shop while shifting to dried flowers and antiques. 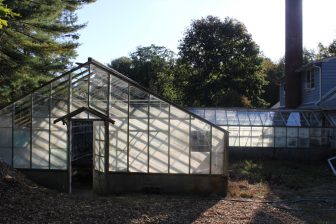 The late afternoon sun shines on the greenhouse panes

Schwartz says the Richleys have been sharing photos and stories, some of which were passed to them by the Fincks. She says many greenhouse treasures were left behind, including wooden crates, terracotta pots, tools and other artifacts.

“I’m enjoying every minute of this,” she says.