The Beacon High School boys’ soccer team suffered its first two losses of the season last week against larger schools but picked up a 3-1 win over Ketcham on Monday (Nov. 9). 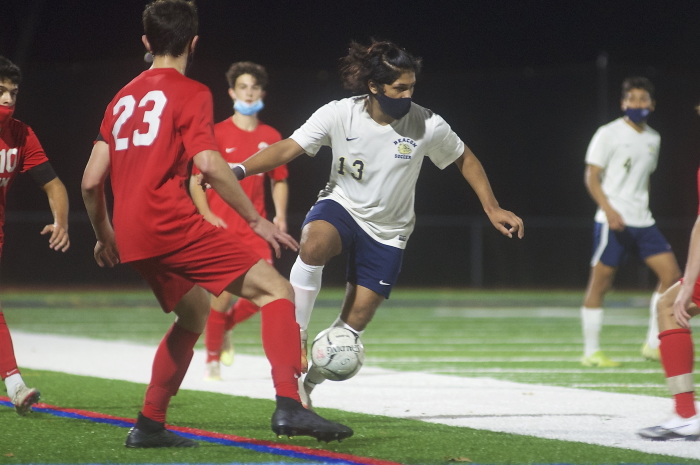 Miguel Ruiz (13) had an assist against Ketcham. (Photo by S. Pearlman)

Against Ketcham, the Bulldogs (7-2) trailed 1-0 at halftime but Chase Green scored for Beacon 12 seconds into the second half, converting a pass from Warren Banks to tie it. Banks scored 10 minutes later, assisted by Green, and Dillon Kelly closed out the scoring on a corner kick off a pass from Miguel Ruiz.

Coach Craig Seaman said that while his team dominated possession in the first half, “we adjusted our alignment slightly” in the second half by using two forwards. Ruiz moved to defensive midfield and sophomore Jack Philipbar “gave us some good minutes off the bench,” the coach said. 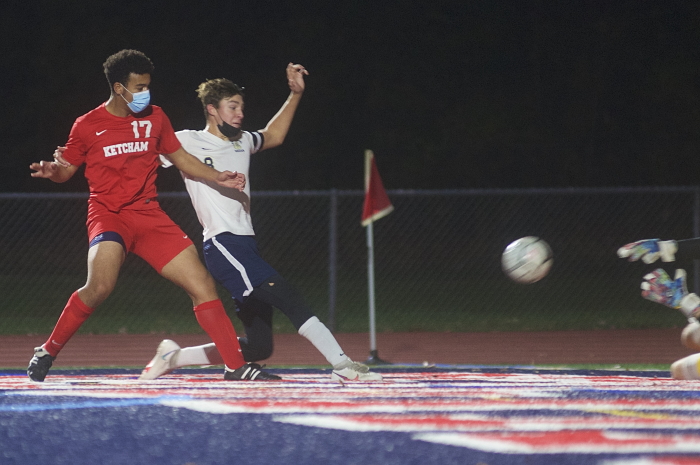 Warren Banks (8) sends a shot at the Ketcham keeper. (Photo by S. Pearlman)

The 1-0 loss to John Jay was “probably our best game of the year,” Seaman said. “It could have gone either way; we missed a penalty kick that would have tied it. I was pleased knowing that we can compete with them.”

In the game against North Rockland, Green scored, assisted by Banks. Lucas had 10 saves in goal for the Bulldogs, who were playing their first game in nine days.

Beacon was scheduled to face Hendrick Hudson on Thursday (Nov. 12) and Arlington today (Nov. 13) to finish the season before the playoffs begin. The Bulldogs will likely receive a first-round bye in the five-team Dutchess County bracket and advance to the semifinals on Wednesday (Nov. 18).