Students in the Highlands will in the next two weeks have access to rapid-result COVID-19 tests that could allow administrators to keep public schools open as cases continue to rise in Dutchess and Putnam counties.

The testing programs are being implemented independently by the school districts, not because the state requires it.

Beacon Superintendent Matt Landahl announced this week that the district had received 1,000 free tests from the Dutchess County health department. With the state making few updates to its “micro-cluster” designation program, the district plans to begin testing during the week of Jan. 25.

Students in one hybrid-instruction group will likely be tested one day and students in the other hybrid group on another day. One of those days is expected to be a Wednesday, the district’s all-virtual day, he said.

“I think we’re in a place where the state is super-focused on the vaccine and they’re leaving the rest to the localities,” Landahl said. “Guidance from the state is getting into a gray area, to say the least” with what is required of districts to continue with in-person classes.

The tests — which show results in about 15 minutes — will be voluntary. Landahl said the goal is to determine positivity rates for a cross-section of the district’s student body. The results may be broken down by school if enough students take the tests.

“We all see the cases rising, but it’s not like we’ve hit this certain point where we have to do testing,” he said. Instead, test results will help identify asymptomatic carriers of the virus and prevent its spread.

If the district results are higher than those found at the county or regional level, Landahl said he will consult with Dutchess health officials. If they’re in line with what the health department is seeing in the larger community, “I see this as another way to keep us going this winter,” he said.

Testing locations haven’t been determined but will likely be inside in an isolated space due to the cold weather.

The Garrison and Haldane districts announced testing this week, as well. 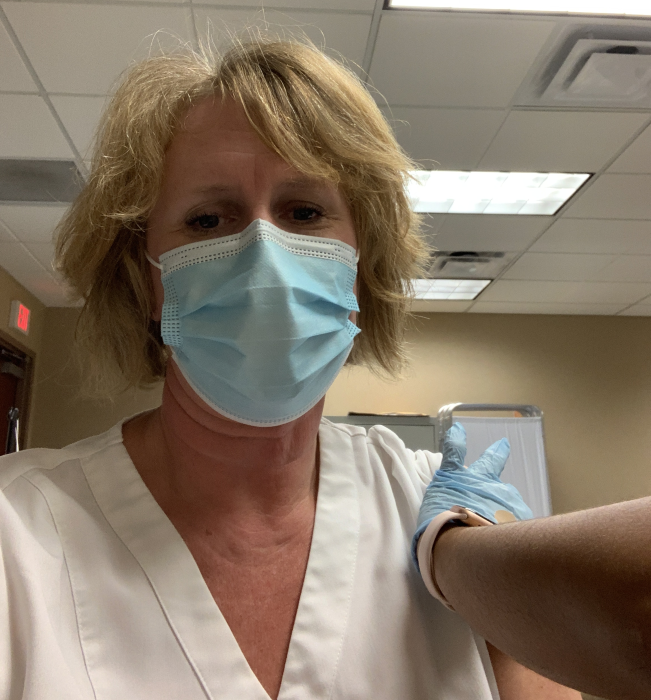 Melissa DeFonce, the nurse at the Garrison School, received a vaccine on Jan. 8 at the Putnam Hospital Center from a student nurse. (Photo provided)

Garrison Superintendent Carl Albano said the district had initially planned to save its 72 kits — enough to test about 30 percent of the students and staff — until or if the school is in a region designated by New York State as part of a yellow, orange or red cluster, which would have triggered a testing requirement for schools to continue with in-person classes.

But, like Landahl, Albano said on Thursday that he’s heard little in recent weeks regarding the micro-cluster program.

“That was the rationale behind holding off, but there are new developments all the time,” Albano said. “The thinking has evolved and we are going to initiate testing.”

The district will administer voluntary drive-through tests beginning at 8 a.m. on Monday (Jan. 18), when schools will be closed because of Martin Luther King Jr. Day.

Haldane will host voluntary testing clinics on campus for staff and students on Jan. 19 and Feb. 1. Both days will be all-virtual for all students, Superintendent Philip Benante wrote in an email to parents this week.

All appointment slots for the Jan. 19 tests were filled within 24 hours, school officials said. Appointments for the Feb. 1 tests will open next week.