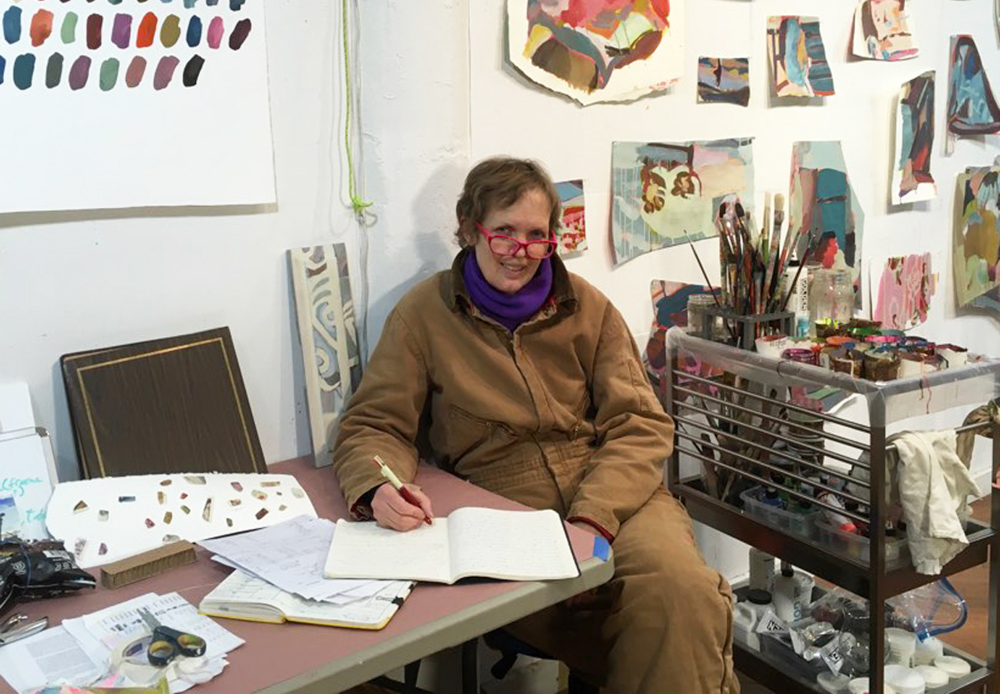 When Elise Church begins a painting, she hasn’t fixed on an idea.

“I like to catch myself off guard,” the artist explains, “It always starts by looking through a stack of photos. Often I’ll take a piece of paper and block out what I’m not interested in. What’s left I cut up, or frame in some way, and that becomes what I’m going to paint.”

The results of Church’s most recent explorations — a series of large paintings called Blue Like an Orange — will be exhibited at the Garrison Art Center starting Saturday (Jan. 23), with a socially distanced reception from 5 to 7 p.m.

A photo album from the 1960s that Church discovered at the Brooklyn Flea in 2013 has influenced her work ever since. “It looked like it could have been my own album, although it clearly featured a boy who is maybe a few years older than me,” she says. The photos depict rites of passage such as getting a dog and a first car.

“I looked at it and thought, ‘Am I really going to spend $80 on this?’ But it was beckoning me, and I just had to have it,” Church recalls. “I would pore over every page for years afterward. It started this path for me.” Church has since found other random scrapbooks from the 1960s that she uses as source material. 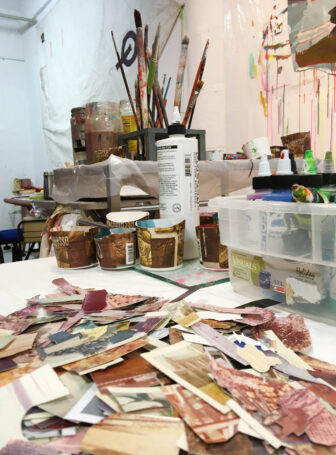 A table in Elise Church’s studio holds the fragments she builds her paintings on.

Church does not paint scenes from the photos. Instead, she deconstructs and rebuilds them. “I always cut the subject out,” she says. The remaining fragments inspire the paintings, which are often done on household linen or other fabrics.

Once the fragments morph into paintings, it’s hard to discern the inspiration. “The less recognizable, the better,” she says. “I work intuitively and directly.”

“Most people talk about the color and the shapes, in which case I describe how they’re just cut from the pictures and I’m not interested in corners, in 90 degrees; I’m interested in how they work in the space,” Church says. “In the Art Center show, the pieces will be mostly unframed and placed up high and on the floor with the idea of engaging with the space and navigating around them.”

Church moved around a lot as a child and says she has few of her own childhood photos. Her art “is retracing that time through other people’s photographs. I have a giant Ziploc bag with heads and bodies [cut from found photos] — I can’t seem to throw them away.”

The personal photos she does have from the 1960s and ’70s have “such a wonderful color palette: fuchsia, oranges, fantastically loud.” The colors changed after her mother married a man from Bermuda. “I realized at some point that my palette is from growing up there: the blues, the pinks, the connections with water,” Church says. Most of her time now is spent in Sunset Park, Brooklyn, where she lives, and Dumbo, where she has long shared a studio space.

A Skidmore College graduate, Church spent three years in Paris as a young adult, where she studied and worked in graphic design. On the heels of the 2008 recession, seeking a steadier income, Church studied dental lab technology at the New York City College of Technology and learned to work with ceramics to build crowns and dentures.

At her first dental job, she was asked if she could mix colors, because the practice needed someone to create facial prosthetics, or anaplastology. That is now her specialty.

“When I make a silicone prosthesis, it has to be an exact color match, and precise anatomical form — there’s no room for ‘Ah, a little drip here, not a straight line there,’ ” Church says. “That technical skill, say to make an ear, is exacting and it takes tight observation [and] concentration, which relates back to when I started out in school as a painter. Also, there’s this irony in that I cut away any human form when I’m looking for imagery to paint, and here I am giving someone their form back.”

The Garrison Art Center is located at 23 Garrison’s Landing. It is open from 10 a.m. to 5 p.m. from Tuesday to Sunday. Blue Like an Orange will run concurrently with Mison Kim’s solo exhibition of works on paper. Both shows continue through Feb. 28. See garrisonartcenter.org.