In this age of stretched-out time, not knowing if it’s a Tuesday or a Friday, coupled with the inability to comprehend the numerical horrors of pandemic mortality, textile artist Pat Hickman’s installation at the Buster Levi Gallery seems, well, timely.

Hickman describes Counting, Still Counting…, which runs, ribbon-like, across the walls of the Cold Spring gallery, as “a room full of marks, made by hand, of the hand, counting life, counting death, counting time.” These marks are accompanied by rusty nails, on a narrow strip sandwiched between the type of skin membrane used to encase sausage.

Accompanying the strip are scattered piles of square nails collected from a friend’s barn that date to the 1840s, suggesting, the artist says, “more waiting to be counted, more loss to be measured. There’s that sense that more counting will be necessary.” 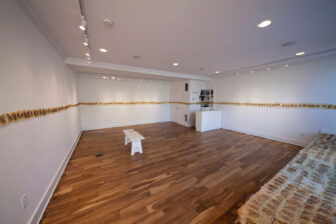 Making marks has always resonated with Hickman, whose work is owned by the Smithsonian Institution, Denver Art Museum and Museum of Fine Arts Boston, among other collections. “There seems to be a universal human need to mark,” she says. “I lived in Turkey for seven years and there you see, scratched on walls, the ways people make those marks: 1, 2, 3, 4 and then a diagonal. You see in other countries how people have marked days, how people in prisons count time.”

In her notes for the show, Hickman expands on that thought: “Counting surrounds us … recording, numbering, adding, tallying, measuring — a record of time. Archeological evidence suggests ancient cultures have kept track, too. We’re part of a human continuum, but perhaps now, for us personally, we’re counting more than ever before. It’s impossible to truly grasp thousands or millions, yet we’re hearing these numbers daily, of people who have fallen ill, of people who have died.”

Hickman has been making art for decades, predominantly on the West Coast and in Hawaii, where she was a professor and head of the fiber program at the University of Hawaii at Manoa for 16 years until 2006.

“The idea of this did not originate at this moment, but it came together in my mind in a way that felt right, right now,” she says. “We’re so surrounded by counting, hearing numbers every day. The time was right to put this piece in this configuration — I had earlier made strips of rusty nails but never presented them in one long linear strip. In many ways, it’s a more successful installation.” 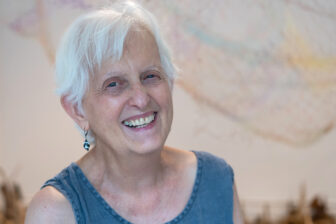 Hickman studied design and textiles at the University of California at Berkeley and later taught summer workshops at the University of Alaska at Fairbanks. There she became “aware of native people using seal and walrus gut to make an outer protective surface, not against cold, but against water — they were worn when kayaking.” She borrowed gut and fishskin textiles from provincial museums for an exhibition she curated for the San Francisco Craft & Folk Art Museum.

Although Hickman’s father was a butcher, and as a child she was troubled when he killed animals, she saw these deaths from a different vantage point in Alaska. “I like the idea of giving a new life to something, like working with the membrane of sausage casing,” she says. “I use it a lot, though never to duplicate what native peoples have used.” (She found her first supply at a deli in Oakland and now purchases it from sausagemaker.com.)

In recent years, Hickman has uprooted herself from life in Hawaii to be closer to her daughters and grandsons on the East Coast. “I wanted to be in the same time zone,” she says, and near the galleries and museums of New York City. Wherever she has lived, she’s found a way to work with materials related to where she’s living. 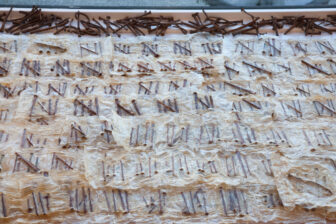 “In Hawaii, the plants were so different; I used what I found in nature and transformed it,” she says. The same was true during a recent residency in Maine, where she discovered “river teeth,” or “the part of a tree that holds a branch to the trunk.”

“It’s the last part of a tree to disintegrate,” she explains. “I gathered lots of those and have done a lot of installations. Sailors would see them in the water and not know what they were, just that they looked like teeth. I gathered them in a path in the woods, these bits that are left. I had never worked with those materials before; I do like to respond to the environment of where I’m living. The sense of history on the East Coast is real, and I’ve responded to that, as well.”

The Buster Levi Gallery is located at 121 Main St. in Cold Spring. “Counting, Still Counting…” runs through March 28. To make an appointment, email Hickman at [email protected] A video is posted at vimeo.com/513398575, and below.

An earlier version of this story said Hickman studied at the University of Alaska at Fairbanks. In fact, she taught summer workshops there. This has been corrected in the text.