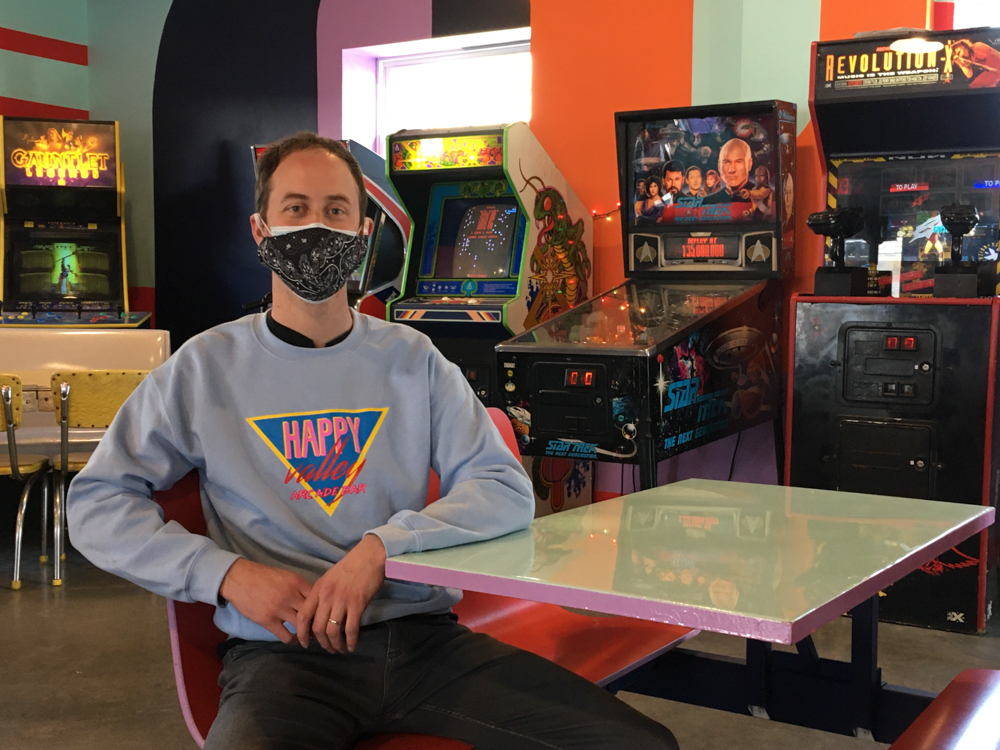 Johnny Coughlin, who co-owns the Happy Valley Arcade Bar in Beacon with Alyssa Follansbee, will be able to allow customers to use the games on March 26. (Photo by L. Sparks)

In the past seven months, Alyssa Follansbee and Johnny Coughlin have only seen half their dream come true.

Happy Valley, the arcade and bar they seeded at 296 Main St. in Beacon with their life savings and a collection of 1970s to 1990s vintage arcade games such as Centipede, Galaxian and Pac-Man, opened in August. But within a week, a representative from the State Liquor Authority called to say it could not operate under the COVID-19 restrictions then in place.

The call came the same day three carloads of friends and their children drove from New York City to celebrate the couple’s new venture.

“I had to tell all these kids, who drove two hours, you cannot play any games,” Follansbee said. “We’ve just been a bar” since then.

That is why the couple responded with excitement to Gov. Andrew Cuomo’s announcement last month that family entertainment centers and places of amusement could open at 25 percent capacity as of March 26. It’s one of several restrictions that have been removed during the last six weeks as the number of people vaccinated increases and the number of COVID-19 cases falls.

Starting Monday (March 15), wedding receptions and catered events can resume with capacity limits and other restrictions, and on March 19, restaurant owners in Dutchess, Putnam and other counties outside New York City will be able to operate at 75 percent capacity instead of 50 percent. Three days later, home gatherings of up to 25 people will be OK outdoors, as well as social gatherings of up to 100 people indoors and 200 outdoors.

Starting April 2, arts, entertainment and event venues can reopen at 33 percent capacity, the state has said, with a cap of 100 people indoors and 200 outdoors. The state also announced that summer camps can begin planning to reopen and that people traveling from another state no longer need to quarantine.

Coughlin said that Happy Valley Arcade and Bar was “losing a lot of money” in January, when the number of COVID-19 cases in the state, and in Dutchess and Putnam, reached pandemic highs. Now, he and Follansbee are feeling more optimistic as they build plastic screens to put between the games before opening them to players.

For restaurants, the expansion of indoor dining may have little practical effect at smaller eateries that don’t have room to add more tables and still meet the requirement that they be spaced 6 feet apart, noted Cathryn Fadde, the owner of Cathryn’s Tuscan Grill in Cold Spring. But Fadde said she is already seeing an impact from the growing number of people who are vaccinated, including vaccinated couples who make reservations to dine together.

“I get to actually sit four at my tables for four because people are feeling more confident about going out if they’re vaccinated,” she said.

Kate Vander Linden, a co-founder of the Beacon Performing Arts Center, said it plans to hold its first live performance in May.

Since non-essential businesses were forced to close a year ago, the children and teenagers who take the center’s classes have been mostly learning and performing by Zoom. For two musicals last year, Rent and Legally Blonde, the children recorded their performances at home and the videos were edited together.

The May show, Into the Woods, will take place outdoors, on the grounds of University Settlement in Beacon. The performers will remain 6 feet apart and wear clear masks, while audience members will sit in family “pods.”

“As theater artists and as humans we crave the energy of other humans, so when it’s taken away from us we just appreciate it so much more,” Vander Linden said.

Kate Guerra, the manager for Roundhouse in Beacon, said she reacted with “pure excitement” when Cuomo said the state would allow wedding receptions and catered events. Her phone “started blowing up” and she received a flurry of texts from event managers and staff.

Roundhouse had more than 100 weddings booked last year, and had hosted 11 before the shutdown. Some couples downsized to receptions with 50 or fewer people, but “the remaining weddings were either canceled or postponed,” she said. “It was pretty devastating.”