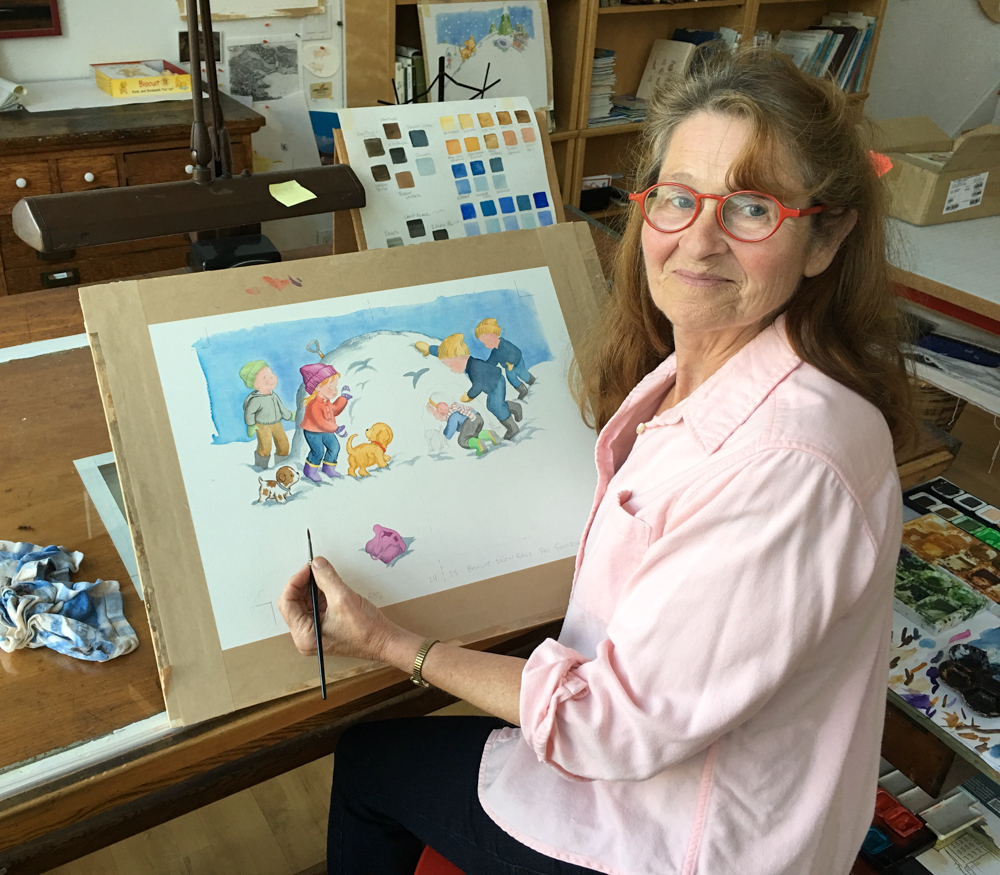 Pat Schories sketches on a digital pad but handpaints her illustrations. (Photos provided)

When Pat Schories envisions an idea for a book, she says the first step is “sketch the whole thing out, do a couple of sample finishes and put together a dummy book — a mock-up.”

She did the same thing, more or less, in second grade.

“I wanted to make books, so I made one,” says the children’s book illustrator, a former longtime Philipstown resident who now lives in Hopewell Junction. “I hand-lettered it, stitched the pages together and made end papers. I was involved more with process, more than the content.”

When she was growing up in New Rochelle, her mother read to her frequently, often from anthologies such as Grimm’s Fairy Tales that “had no pictures except the initial capital letters which started the story,” Schories recalls. “She also read me a lot of Golden Books.” By the fifth grade, Schories was “inhaling” books on her own.

The family moved to Ohio, and, when she finished college, Schories longed to work as an illustrator. She was fortunate, she says, because there was a push at the time for children’s books, but it was difficult to get work with New York publishers while living in Ohio. After saving $500, she packed her car and drove to the loft apartment of “a friend of a friend of a friend” in Soho. She quickly found freelance graphic design work and an affordable apartment in Croton. “From there I discovered Cold Spring, and I never did move into the city,” she says.

Initially, Schories specialized in botanicals and gardening books, in which the drawings were scientific and precise, unlike the illustrations she wanted to create that would appeal to children. She continued with her freelance graphic work by day but, by night, did her preferred illustrations.

“I was overly busy for about 20 years,” she says. “It wasn’t until the 1980s that I got my own first book published. I was ecstatic but it was still quite a few years before I could quit my day job.”

That wordless book, Mouse Around, remained in print for two decades. “It’s a story of a little mouse who fell out of his nest and into a plumber’s pocket, then escaped and went here and there, all over, until amazingly he got back home and fell into the sink down the drain, right back home where he started from,” Schories explains. Although wordless books “generally don’t sell very well,” she says, she followed Mouse Around with He’s Your Dog and Jack, and then illustrations for the bestselling Biscuit series.

At the time, she owned two puppies. One of them, Speed, was the model for Jack — “He was more devilish, loved to rip toilet paper and would rather get into trouble than sit on your lap” — and Spike was the model for Biscuit. “He was very affectionate and wanted to please me at all times,” she says. 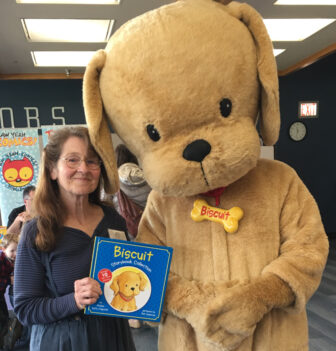 Schories with a “live-action” version of her most popular character, Biscuit

After the initial Biscuit manuscript, written by Alyssa Satin Capucilli, was purchased by HarperCollins, the publisher began to look for an illustrator. Schories and others were asked to submit sketches, “and one of the art directors picked up my [He’s Your Dog] book and said ‘Why don’t we use her?’ ”

“The way it worked at HarperCollins was there is no input between author and illustrator,” Schories recalls. “I was given a lot of room, and I was so happy about that. It works best for the author and illustrator if they are kept separate. Editors have told me that one of the most creative things they do is to make the pairing.”

In fact, Schories did not meet Capucilli until soon after the book was published. While she was attending an author’s group in Westchester, an attendee across the table read one of her poems, which Schories found beautiful. When the woman introduced herself to the group as “Alyssa,” Schories realized who she was.

Biscuit was not envisioned as a series, but it sold well. There are now more than 80 titles, including those marketed as I Can Read books and digital versions.

Schories says she does all her color painting by hand but sketches using an electronic drawing tablet. “It’s amazing to be able to swap things, make revisions, line things up, do layers,” she says. “I’m still exploring, but I’m stunned by how much I like it. When I’m all done with my sketches, I pull them together in a PDF and send them to my editor — it’s easy.”

Because she works alone at home, Schories says her routines haven’t been disrupted much by the pandemic. “The work I do is time-consuming, and I have deadlines,” she says. “But this year it’s been delightfully slow for me. I’ve spent time socializing, walking with friends, hiking, doing embroidery. I still feel busy, but the pressure seems to be gone, although I’m in my studio every day.”

She says she has never stopped learning from children’s responses to her work. “What a little kid likes is not necessarily what a trained artist likes, but there’s a happy medium,” she says. “My desire to draw perfectly is gone. I now try to find something that children will want to look at.”