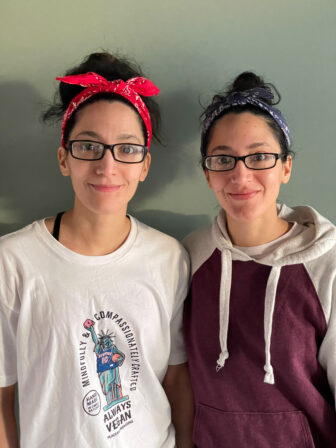 What brought you to Beacon?

Brittany: We had a good friend who was a manager at Homespun Foods and Ella’s Bellas, so we visited frequently. Plus we appreciated the small business focus of the community and how vegan-friendly it is here. We looked at a couple of spots around 2015 but nothing met our needs. Eventually, this space popped up and we were like, “Oh, wow, this might be it.”

What kind of market research did you do?

Brittany: We sampled our doughnuts at farmers’ markets and pop-up events in New York City, Westchester and the Hudson Valley for about six years. We were doing brownies and other baked goods, and it wasn’t until we started doing early-morning markets that we thought, “What goes well with coffee?”

Justine: There weren’t a lot of vegan sweets or baked goods around. In the beginning, it was figuring out how to advertise our products. “Vegan baked goods” turned off a lot of people, especially at the farmers’ markets. But then we started calling our products “plant-based” or “dairy-free” to help customers move beyond the preconceived notion that vegan products aren’t good.

What’s the difference between a vegan and a regular doughnut?

Brittany: We stick to a traditional baking process to make it taste just like a regular doughnut, but without any animal products, so no butter, milk or eggs.

Justine: We don’t use any pre-made mixes, preservatives, stabilizers or artificial flavors in our icings. We’re hyper-focused on making everything from scratch in small batches and keeping the ingredients to a minimum. We also try to keep things fun with flavor combinations, colors and textures. We have both over-the-top and classic and simple.

How have they been received?

Justine: It’s been overwhelming. They’re flying off the shelves.

Brittany: We’re in the back pumping out doughnuts, so we don’t see the interactions. But I manage the Instagram page and Justine does Facebook, and some of the responses I’ve seen are: “I can’t believe it’s vegan” or “This is the best maple iced doughnut I’ve ever had.”

Why is veganism important to you?
Justine: I was on a family trip about seven years ago in the Finger Lakes, and we stayed near a rescue shelter called the Farm Sanctuary. I convinced my family to go, and during the tour something clicked. I had to hold myself accountable for the choices that I’m making. I’m also a dietitian, so the transition was easy. I went to visit Brittany, who was living in San Diego. She was a vegetarian but I exposed her to veganism, and on her days off, we were veganizing our favorite recipes. It was like, “Why aren’t we doing this together?”