According to an account in the Poughkeepsie Eagle, two inmates at the Dutchess County poorhouse who fell in love — Jerry Morris, who was “well read in the history of nations and could translate French and German stories,” and Ella Cronine, “who showed proficiency in painting” and “knew much of embroidery” — escaped together when Morris was told he could not leave. The couple arranged through notes to meet “near the madhouse,” hid in the woods overnight and boarded an early-morning train to Fishkill Landing, where they caught a steamer to New York City. They apparently were not pursued by county officials.

Minnie Schatzle sued the Village of Matteawan for $20,000, saying she had tripped on a defective Fountain Street sidewalk, spraining her hip.

Ernest Arnheim, the son of a millionaire cap manufacturer in New York City, was convicted of forgery but declared insane and sent to Matteawan asylum. According to one account, “a fast life is said to have caused his mental derangement.”

W.H. Dibble, who owned a hotel in Matteawan, was arrested and charged with violating a newly passed state liquor law by serving alcohol on Sunday. It was the first prosecution in Dutchess County under the law, which raised the drinking age from 16 to 18 and prohibited alcohol sales on Sunday except in hotels with at least 10 rooms if served with free meals. (Saloon owners began adding small, barely furnished rooms and offering complimentary sandwiches.)

Three residents of Matteawan were driving a wagon to Poughkeepsie when a front wheel fell off and the team broke into a gallop. All three were thrown from the wagon and seriously injured; they were taken to a nearby hotel to recover.

Ambrose Monell, the former president of the International Nickel Co., died at age 48 of what The New York Herald described as “war strain” after coming to Beacon to take a “rest cure” at the Craig House sanitarium. Monell had served as president of the nickel company until 1917, when he resigned to become a colonel in the aviation service of the U.S. Army, organizing and training bombing squadrons in France, according to the Ambrose Monell Foundation, which his widow founded in 1956 to fund medical research. At his death, Monell’s estate was valued at $20 million (about $300 million today). 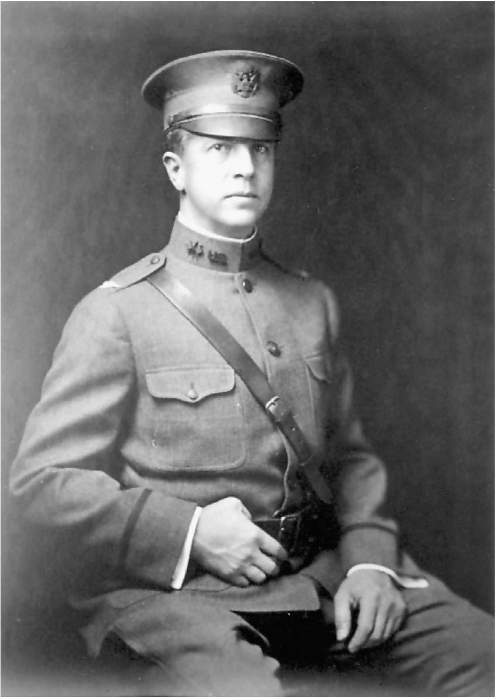 The Poughkeepsie Eagle-News reported losses attributed to the rage for toy balloons: A Beacon woman lost a watch and a Vassar student lost a diamond ring when the items became entangled in the strings and floated away.

Following a burglary at Beacon High School, the school board took out an insurance policy to cover thefts. The board president argued it was unnecessary, noting the school had a 24-hour guard.

Clinton Gardner broke his arm while cranking his automobile. [Before the electric starter was invented, a driver had to connect the hand crank to the crankshaft and wind it to start the engine. But any kickback could break an arm, wrist or thumb.]

Alice Barker of Beacon received $480,000 under the terms of the will of her father, George Hearn, a dry goods merchant in New York City. His estate was valued at $7 million, of which $1.4 million was invested in federal Liberty bonds to support the war effort.

Ten men, including the mayor and supervisor, traveled to New York City to hear an address by President Warren Harding, who arrived on the presidential yacht to attend a memorial service for the war dead. “We shall never be called upon to make war again so long as God and men rule together,” Harding said.

Jimmy Shields of Beacon faced Jimmy White of Hudson at a social club in Newburgh; the winner was promised a match against Johnny Martin, the lightweight champion of the Hudson Valley.

A road was under construction on Mount Beacon that would connect the Beaconcrest hotel and the DAR monument. It was hoped it could be extended to the Post Road to allow access by car. 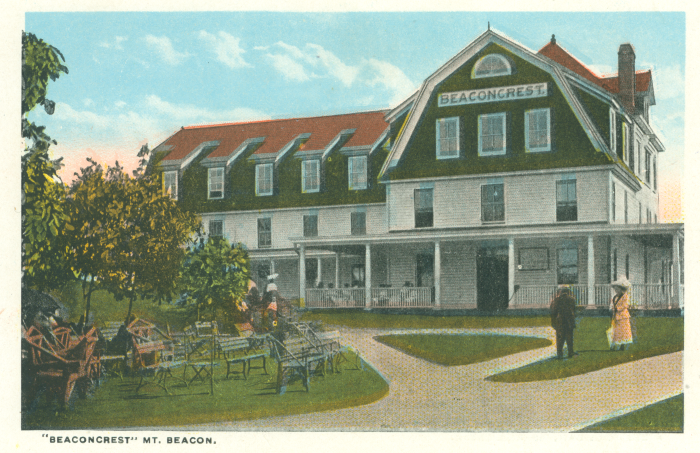 A road was under construction 100 years ago to connect the Beaconcrest hotel on Mount Beacon with the DAR monument. (Beacon Historical Society)

A state appeals court agreed to hear an appeal in a lawsuit against the city that had gone on for five years. Veronica Meyers initially sued Beacon in 1916 for $10,000 after she said she tripped on an icy sidewalk on Main Street. A jury awarded her $2,500, which was reversed on appeal; a second jury awarded her $5,315.

Mary Toth, an employee of the Glenham Embroidery Co., was taken to Vassar Brothers Hospital after she accidentally swallowed a pin. An X-ray showed it in her stomach; doctors prescribed “natural methods” to remove it.

The state agreed to a five-year lease on a three-acre tract at Memorial Park to build 50 housing units in Army barracks for returning soldiers. At the same time, George Van Voorhis and Roy Ketcham broke ground on a 100-home development on a 40-acre tract on Route 52 just outside Beacon.

Beacon asked Dutchess to allow it to become part of the county welfare district. The city had been taking care of its own home relief, old-age assistance and hospitalizations, while the county administered child welfare and paid the cost of tuberculosis patients.

Pete Carter, the Beacon High basketball coach, said he would leave in September to become the athletic director of the 23 schools in York, Pennsylvania.

Floyd Callahan, executive officer of the Matteawan National Bank, was elected president of the school board. He succeeded Carl Gurnee, who retired after 15 years. [The mayor appointed board members, who elected their leaders.]

A Beacon resident who worked at the Hopewell Junction railroad yard was killed and the driver of a Beacon laundry truck was seriously injured in a fiery head-on collision on the Hopewell-Beacon highway. The crash happened on the opening day of a county traffic-safety campaign.

Deputy Fire Chief Van Norstrand was seriously injured when he fell from the roof of a porch at 34 N. Hamilton St. while fighting a fire that killed a 41-year-old man.

Mrs. Valentine Gahnkin, who owned 200 hogs and pigs, said she was considering selling them because of a feed shortage. She had only a week’s supply left.

A patrol officer spotted two Poughkeepsie runaways, both age 8, two days after a man said he had dropped them at Bank Square. The driver said he had seen the boys walking barefoot on the railroad tracks and, concerned, offered them a ride. The boys said they slept for two nights in an abandoned automobile. Family members spent hours searching the Hudson River, fearing the boys had drowned.

The general manager of Plant 2 of the Dennings Point Brickworks north of the city, the only brick manufacturer still operating in the area, said he could not address rumors that it was for sale. Plant 1, at Dennings Point, had shut down when its clay deposit was exhausted. 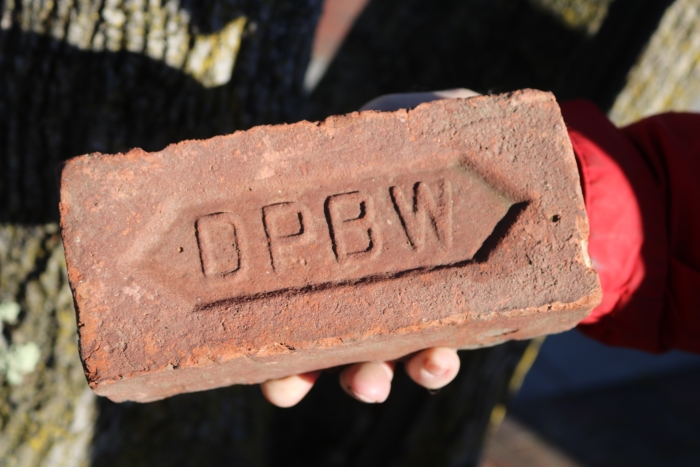 After four years of Army service, Melio Bettina was training for a chance at the World Light Heavyweight boxing title. “I was signed twice to fight [Joe] Louis, and twice the fight failed to come off,” he said. “The leading heavyweights seem afraid of me because of my ring style” as a leftie.

The school board made its case to voters to approve $8.5 million for a new high school and swimming pool, noting that the current school was 10 percent over capacity and located on just 2.5 acres. Only two of the six candidates for the school board supported the plan, and voters turned it down by a 2 to 1 margin.

The school board approved a $5.18 million budget that was 9.5 percent higher than the year before but still included the loss of nine jobs and cuts in the sports and driver’s education programs.

Charles Kormondy, who operated his own mobile meat market in Beacon for more than 40 years, died at age 64.

Gov. Nelson Rockefeller announced plans to transform Stewart Airport into the state’s fourth major jetport. Mayor Robert Cahill said he opposed the move, which he felt would bring only noise, pollution and congestion on the two-lane Beacon-Newburgh bridge. The governor “has never shown any concern for people in other things he has done, so I didn’t expect him to this time,” Cahill said.

The Poughkeepsie Journal reported on a Pete Seeger concert at Vassar College: “Strumming his banjo, Seeger moved immediately into a song about pollution; in his lyrics, comic in style but tragic in implications, he was sitting on his porch in Beacon, looking down at the river, lamenting its condition while admiring the view.”

Officials at Highland Hospital held an open house to show off its $1.2 million, third-floor addition, which included 44 beds and a generator.

Beacon native Digger Phelps was named the basketball coach at Notre Dame after a single season at Fordham, where his team was 26-3. He hired Dick DiBiaso, a former Beacon High School coach, as one of his assistants. [Phelps coached the Fighting Irish until 1991 and then was an ESPN analyst until 2014.]

Two corrections officers at the Matteawan State Hospital, including one who lived in Cold Spring, were indicted on manslaughter charges for allegedly beating a 22-year-old inmate to death. The victim had pleaded guilty to a narcotics charge but was sent to Beacon after he was ruled mentally incompetent. [Nearly two years later, a jury acquitted both men.]

The Dutchess County Youth Board proposed testing a “no-bail” system in which four municipalities, including Beacon, would allow individuals accused of relatively minor crimes to be released until trial if they could not afford bail.

A 26-year-old Beacon man accused of sexual assault received a sentence of up to three years. “You had no business in that girl’s room at 3 a.m. with two others,” the county judge said. The defendant said he was innocent but “copped a plea” because of his criminal record. “Who would believe me?” he asked.

The superintendent of schools asked Beacon High School students to skip their annual “skip” day, calling it a “frankly immature student practice,” especially with a war going on.

The Beacon High School boys’ track team defended its Class B title at the Somers Invitational despite missing John Robinson in the 100-meter dash because he was taking the SAT. Robinson showed up in time to win the 200 meters and the long jump.

At a raucous school board meeting attended by about 120 people, residents argued for and against a proposed 4.7 percent increase in the $28 million budget. At one point, board president Deborah Sheers threatened to end the proceedings if audience members did not stop interrupting the speakers.