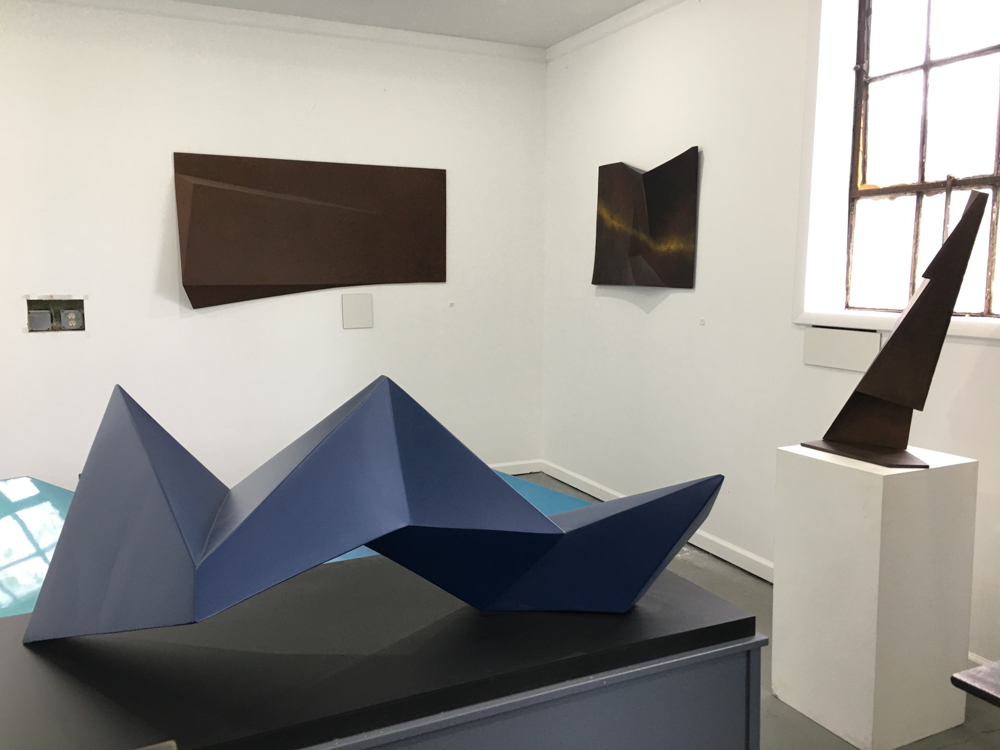 For Nancy Steinson, whose sculptures take shape as planar forms and linear edges, it’s not about geometry as much as “subtle connections and relationships.”

“It’s an attempt to suggest personal meeting, as opposed to the impersonal simplicity of minimalism,” she says. “Sometimes I use two or more forms together to emphasize this connection. Often some parts are open to the viewer, inviting, and others are closed off, private, boundaried.” She works with steel and aluminum “to symbolize the industrial energy of our time.”

In an exhibit that opens Saturday (June 5) at the Buster Levi Gallery in Cold Spring, Steinson will show four sculptures: a two-part wall piece; two pieces that face each other at the center of the room; and a window piece. 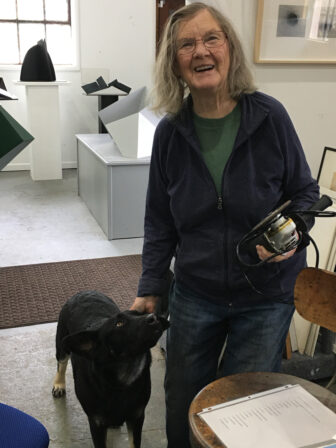 Nancy Steinson and a friend

“I would like to have had some of them in a plaza in a city but I never got into that market of things, say, 15 feet high, which people can walk through,” she says. “I never had the high ceilings to make them. Instead, I focused on putting more of a human touch on the sculpture, using curved surfaces, curved planes that are simple and have clarity and emotional appeal.”

The exhibit also includes eight drawings completed during a Brooklyn summer about 10 years ago. “I imagined I was underwater, playing with the idea of being submerged during a hot time,” Steinson recalls. “Others have to do with going to New Hampshire in summer — my mother was from there — with abstract waterfalls, with what looks like water streaming from the surface.”

Steinson, 85, traces her interest in forms to when she was 5 or 6 years old and would run around their home in Louisville and collect bars of soap to carve. She later was the only girl in her high school welding class. After briefly attending Vassar College, she graduated from the University of Louisville in 1957 with a degree in political science.

Settling in New York City, Steinson found a job at Columbia University — where she would later earn a master’s degree in art education — at International House, a housing complex for foreign students. There she met Raphael Lemkin, a refugee from Poland who had persuaded the United Nations in 1948 to adopt the Convention on the Prevention and Punishment of the Crime of Genocide.

“It was his mission in life to stop group killings, and he spoke often about prejudice being a pre-judging of people,” Steinson says. “Meeting him was extraordinary — we would go to museums together and I helped him with his autobiography.” 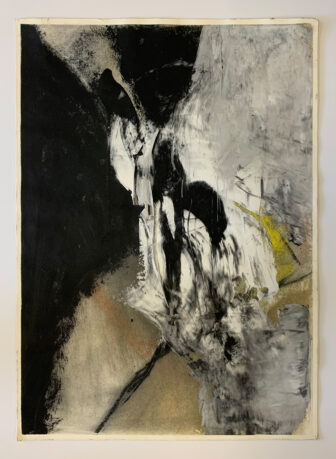 At one point, Lemkin referred to Steinson as an “artist,” which prompted reflection on her part. “I feel that my interest in human rights, sculpture and art run side-by-side. Raphael mourned the disappearance of groups and their culture not only with a political or legal mind but as an archaeologist. This is where my love of art expression resides. I hope mine also makes an impact.”

Reconsidering her earlier leanings toward representational and realistic, Steinson became an abstractionist. “Small, ovular and curvilinear forms in my early work gave way to more liberating, purely geometric structures that were free to move out of a central core and express movement, direction, space,” she says.

During this period, Steinson married a singer from Canada. They divorced after five years and she married an architect from Austria who had come to the U.S. at age 17 to escape the Nazis. They lived in Brooklyn until his death in 2009, after which she relocated to Beacon, which she had heard “was quite the art town.”

The Buster Levi show is Steinson’s first solo exhibit in the Hudson Valley, more than 40 years after her first, in 1979 at Gallery 91 in Brooklyn. Despite her early departure from Louisville, the city is home to several commissioned works, including a memorial garden at Norton University Hospital and a sculpture at the children’s hospital. She also has designed installations for Long Island University, the Vermont Arts Council and the New York City Parks Department, among others.

The Buster Levi Gallery, at 121 Main St. in Cold Spring, is open from noon to 6 p.m. Friday through Sunday. See busterlevigallery.com. The show continues through June 27.