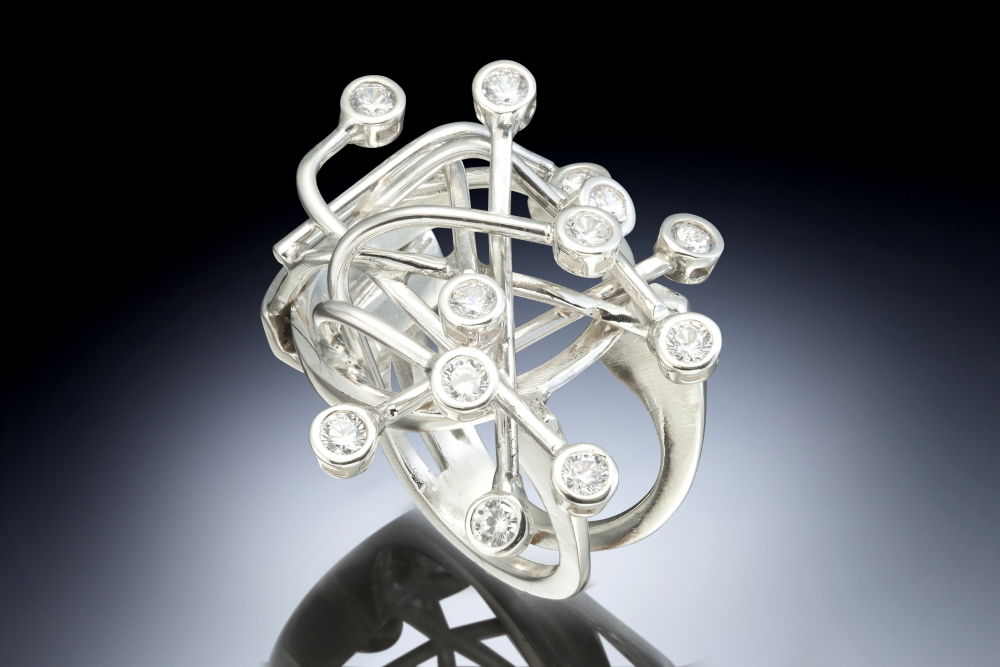 The same hands which brought Marie-Pierre Pulcini’s first career to a disappointing end provided her entry to the second, and third.

When tendonitis curtailed her piano training, she switched to graphic and costume design before discovering her calling: jewelry. 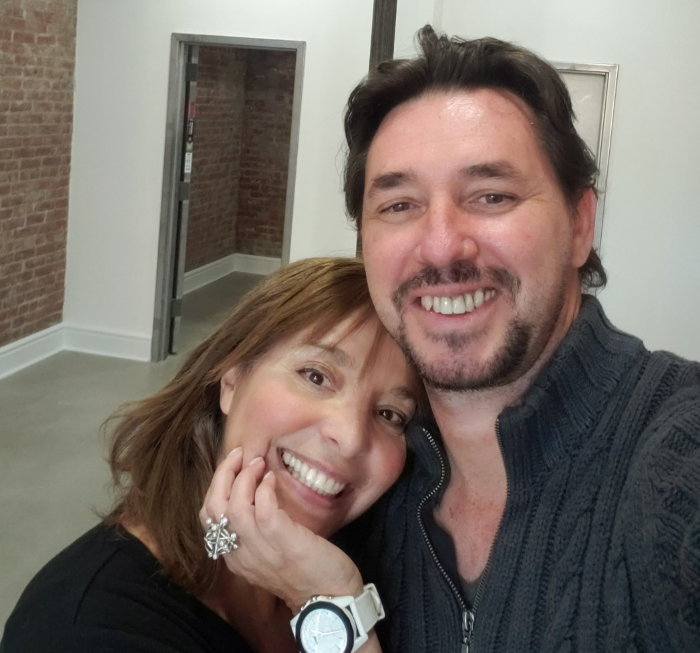 In November, Pulcini and her husband, Emmanuel, opened MP Art Jewelry and Objects on Beacon’s East End. There she displays and sells mostly her own bold designs in sterling silver and stones (gold is too expensive for these metal-intensive designs, she says). There are also works by others.

The decision to go retail was made quickly — which is not the couple’s M.O.

“Because of COVID-19, we would not normally be driving around, but last year my husband said, ‘Let’s go for a ride,’ ” she recalls. “We end up coming through Main Street the back way. I turned my head, saw a ‘For Rent’ sign, and soon we had a store.”

Born at a Paris hospital across from Notre Dame, Pulcini grew up in an artistic household; her mother was a ceramist, and “watercolors, oils and canvases were always lying around,” she recalls. Her father, a scientist and inventor, worked for a company where his job entailed “going into a foreign country for five years, establishing the branch, hiring people, then leaving.”

After a stint in England, the family landed in Boston in 1977. “When it was time for my family to leave, I decided to stay,” she says. “I loved the States and found the education and living freeing.”

Pulcini focused on piano at the Hingham Conservatory of Music and was accepted to continue her studies at Boston University but stalled. 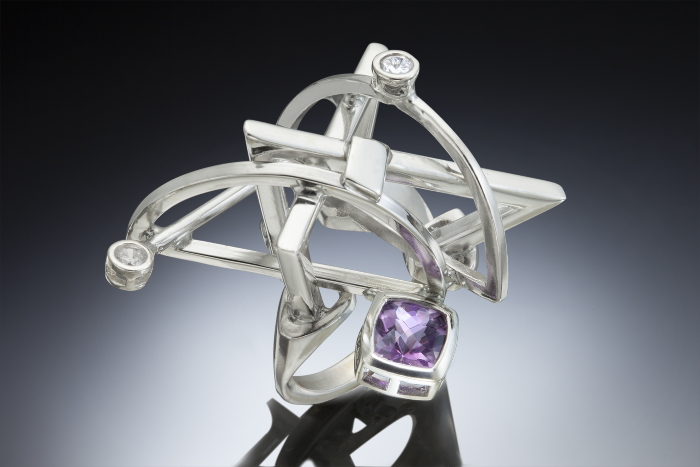 “My technical background was not great and the people I was confronted with were brilliant; they were breathing music,” she says. “I found it so stressful having to practice eight hours a day. Then I got injured and rehabilitation meant waiting a year to heal and then not knowing if it would.”

Pulcini segued into graphic design for magazines, then art direction. The high cost of living in Boston led her first to New York City, and then to Pittsfield, Massachusetts, in the Berkshires, where, over five years, she shifted to designing sets and costumes for dance companies, including the Bill T. Jones company and the Albany Berkshire Ballet.

All the while, she was painting, usually large-scale oils to which she later added aluminum to create a 3D effect. Finding large studio spaces too expensive, Pulcini began thinking about how she could work small with the same methods. That was her initial foray into jewelry. 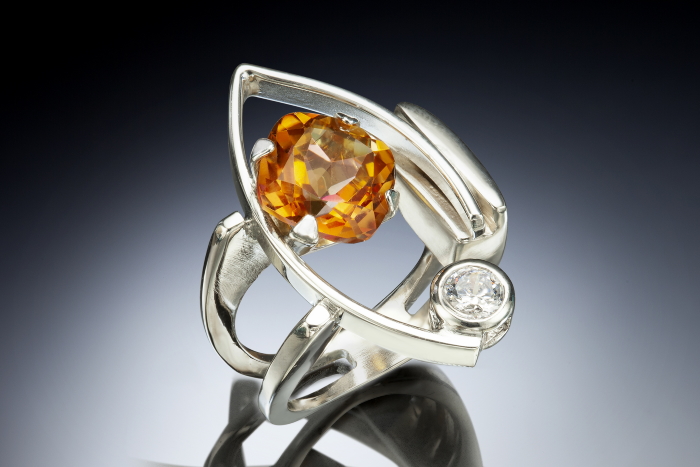 “I learned the trade by doing and improved with experience,” she says. “I was instructed by mold-makers, stone-setters and polishers and it took me about 10 years to design a line of jewelry which reflects who I am. I carve the shape in wax, then bring it to someone who will make metal, then a mold. I’m self-taught, but all my friends were jewelers and I asked them thousands of questions.”

Her husband handles the logistics of the business: applying to art shows, scheduling, accounting, quality control. He provides “a more balanced approach to my work, which sometimes wouldn’t be wearable without his keen eye for details.”

They wholesaled for 10 years before selling from a shop in the annual Bryant Park market in New York City. By then, there was another move — to a barn in Schoharie County that they sold in 2020 to move to Monticello. Her husband quit his job to focus on the business. 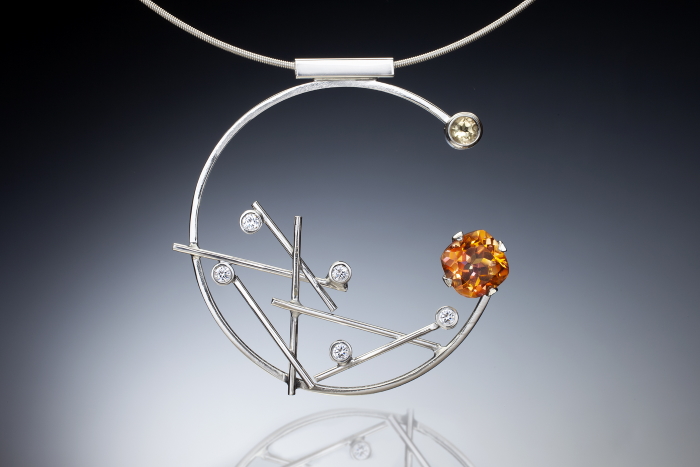 “My work is very quirky, very different, and people who love it are collectors for life,” she says. “For people who dislike it, there’s no in-between. There’s a person who is attracted to a more elaborate piece, with a bigger stone. She has a discerning eye. She will be well-dressed, not necessarily by a fashion name, but unusually dressed.

“I’m very shy but I would wear a big piece because it gets the attention, not me,” she says. “The people who like my work like it for the work itself, as it’s a distraction from one’s self. For me it works that way, anyway.”

Men come in too, mainly during the holidays. “One guy we love, he picked this enormous elaborate necklace,” she recalls. “He was so excited. I questioned him, ‘Are you sure?’ and he said, ‘My wife will love it.’

“His wife came in a month later and told me, ‘I don’t like that piece — it’s not me.’ I said, ‘It’s not, but your husband sees you in a summer dress, wearing this.’ So he came back and exchanged it for a smaller piece. Men ask for your opinion, which is nice, but the way they describe their wives is not always accurate!”

MP Art Jewelry and Objects, at 520 Main St. in Beacon, is open 1 to 7 p.m. on Thursday, noon to 7 p.m. on Friday and Saturday and noon to 5 p.m. on Sunday. See mariepierreartjewelry.com.