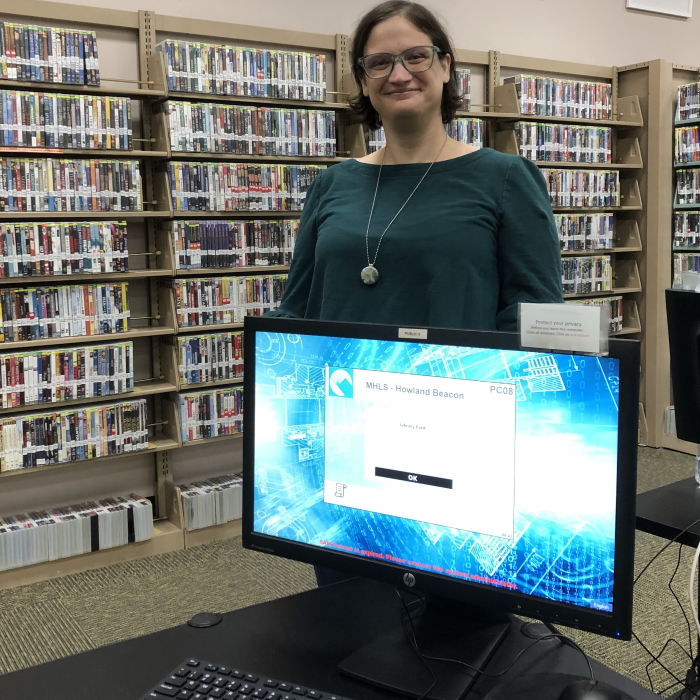 Kristin Charles-Scaringi at the Howland

Kristin Charles-Scaringi, who a month ago became the head of reference and technology (a newly created position) at the Howland Public Library in Beacon, says her goal is to make patrons feel more comfortable pursuing knowledge. “So many people are intimidated and afraid to try” at the library or online, she says.

As a reference librarian, Charles-Scaringi found that much of her job was wrangling technology. She fielded “constant questions about computers, from how to fill out online job applications, to how to do research beyond the basics of a college library website.”

Charles-Scaringi said she took the job because “it mixes the teaching aspect I like, the technology aspect, with some administrative responsibilities, such as overseeing some staff, and overall getting to be both a librarian and a supervisor.

“I want to do job-help programs, both one-off and also how-to guides for resume assistance and skill building,” she says. “I’m hoping to bring a live chat service into virtual reference. I also want to provide information so people don’t fall into scams. I’m planning on doing basic classes on computers, teaching people how to navigate things like Google Workspace, and conveying information on what’s possible that they may not be aware of, like, for instance, that people with Gmail accounts have access to a Microsoft Word-like program.”

After graduating with a bachelor’s degree in creative writing from SUNY Purchase, Charles-Scaringi worked for a short time as a newspaper reporter, then shifted.

“A librarian friend pushed me to become one because not only do I like telling people how to do something, I like teaching them how, so it was a natural progression,” she says. “Reference is instruction — that’s why I like it.”

While pursuing a master’s degree in information and library services at SUNY Albany, she did a summer internship at the Kingston Library and wound up with a job there. Like Butterfield and Desmond-Fish, Kingston and Beacon are part of the Mid-Hudson Library System, which shares resources such as databases.

“Part of my job will be to make them easier to access for patrons, as well as getting my co-workers as comfortable as possible with tech,” she says. “There’s so much going on here, from the Library of Things to our Chromebooks — we’re adding an iPad and a Kindle — and I’m developing how-to guides for staff and patrons.”

Charles-Scaringi says she is getting to know Beacon better. “I’m excited to meet the people who make up this place,” she says. “One thing I’ve learned is people here really like their British TV shows!

“I love the library itself, the clay walls, the unusual things here — like we have a weaving loom and a robot cat companion. Most of all, though, any time the community comes together to create something, like it does here a lot, that makes me happy.”