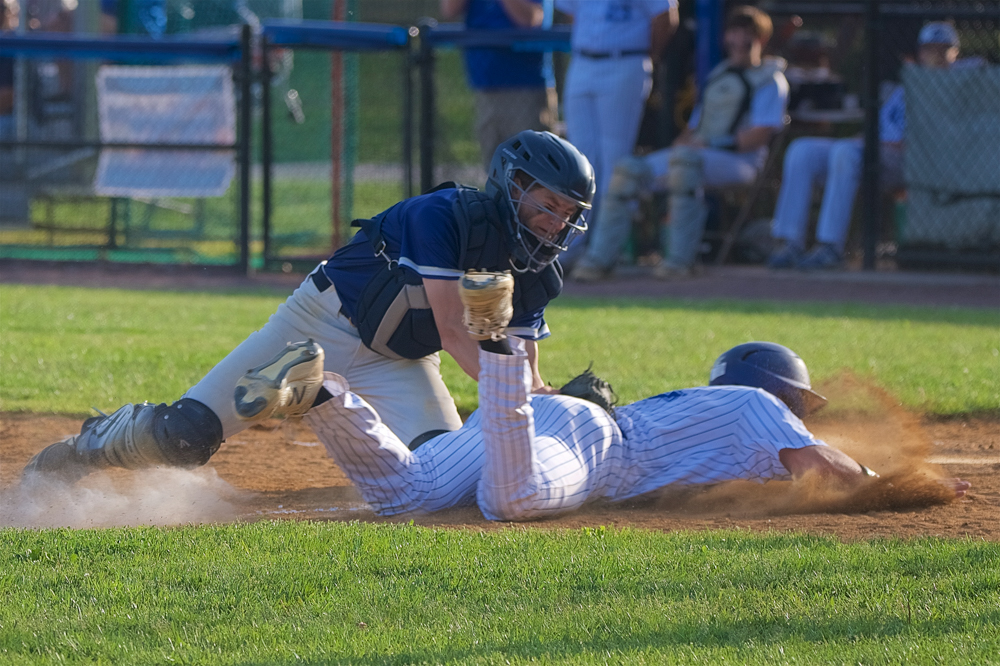 Beacon catcher Liam Murphy puts the tag on a Wallkill runner at home base on Wednesday. (Photos by S. Pearlman)

Seeded fifth in the Section IX, Class B playoffs, Beacon hung with top-seeded Wallkill for most of Wednesday’s semifinal game.

But after the Bulldogs came within one run in the top of the third, their offense stalled and the Panthers kept tacking on runs on their way to an 11-5 victory.

Wallkill (16-4) was scheduled to face Cornwall on Saturday (May 28) in the sectional title game.

Beacon, which finished 8-11 last season when playing in Section I, improved to 14-8 in its first season of Section IX competition. 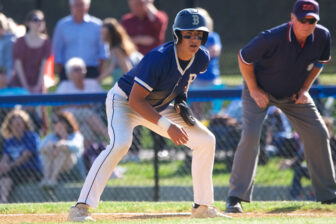 Beacon’s Joey Vollaro leads off first base against Wallkill.

In the Wednesday game, played at Wallkill High, the Panthers came out swinging and scored four times in the first inning, putting the Bulldogs in a quick hole.

Beacon responded with two runs in the second, but the host matched that in the bottom of the inning and went up 6-2.

The Bulldogs rallied in the top of the third, scoring three times to make it a one-run (6-5) game, but Wallkill grabbed the momentum right back, scoring twice more to push its lead back to three. The Panthers scored three more in the fifth.

Owen Brown took the loss on the mound for the Bulldogs, and Ronnie Anzovino, Derrick Heaton and Mikey Fontaine also pitched. 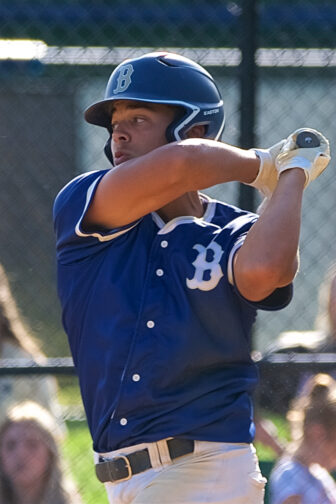 Ronnie Anzovino drove in a pair of runs on Wednesday.

Coach Bob Atwell — whose team beat Wallkill, 9-8, during the season — noted that the Bulldogs had opportunities: They left the bases loaded in the third inning and loaded them again with one out in the fifth but couldn’t tie the game.

“It’s disappointing that we couldn’t end it better,” he said. “But Wallkill is a tough team. They’re seeded No. 1 for a reason.”

“Our pitching staff struggled a bit today,” he said. “But Tyler Haydt has been in the middle of our offense all year — he had a big RBI double — Jackson Atwell has been great and Anzovino had a two-run double that got us back in the game. It’s been a nice spring.”

Haldane also fell in the first round, losing a three-game series to The Leffell School in the Section I, Class D tournament. Leffell won the first game but Haldane took the second, 4-0, on May 18, behind a one-hitter by Julian Ambrose. Leffell advanced on May 20 with a dominant, 16-1 win that included 12 runs in the first inning.

In the May 18 win, Ambrose struck out 11 in a complete-game performance that Coach Simon Dudar called “stellar.” At the plate, he drove in two runs. Trajan McCarthy and Milo Pearsall also had big hits for Haldane.

“It was a great atmosphere with the fans,” Dudar said of the home game. “And it was great to see Ambrose back and fully healthy for the first time on the mound all year. He got to show what he’s capable of. He stepped up when we needed him most.”

Of the May 20 loss, Dudar said: “Some injuries caught up with us, having guys out. Nothing went our way. Just a klunker all the way around that every team has from time to time. We just picked a bad time to have it.”

Pearsall had an RBI double, and Jake Hotaling had two singles for Haldane.

“We had a goal of getting our very young team some experience,” Dudar said. “We get to bring back everyone next season and we’ll have a great squad of juniors and seniors who have everyday playing experience.”

Seeded No. 7 in the Section I, Class D tournament, Haldane advanced to the quarterfinals but on May 20 met No. 2 Bronxville, who cruised to a 17-1 win over the Blue Devils.

The Broncos (14-4) went on to defeat No. 3 Pleasantville on Tuesday (May 24) and were scheduled to face No. 1 Briarcliff in the title game on Thursday.

Liam Gaugler had the only goal for Haldane, which led 1-0 for the first six minutes of the game. But Bronxville scored twice at the end of the first quarter, then pulled away with five more in the second.

“I thought we played sound defense for most of the first half,” said Coach Ed Crowe. “We shocked them a little. But they are big and strong and have some good scorers. Our kids fought as much as they could, but we couldn’t match the firepower.”

Jordon Hankel had 16 saves in net for the Blue Devils, who finished their season at 10-8.

Crowe said his team did well on face-offs. “Frankie DiGiglio was tough. He gave us possession, but their defense was very good.”

Six Haldane players were named to the All-League team: Hankel, PJ Ruggiero, Evan Giachinta, Will Sniffen, Brody Corless and Nate Stickle. Crowe noted that five of the six are freshmen or sophomores, and that the team will lose only two players to graduation.

Tim Ben Adi of Haldane just missed the chance to play in the state championships when he lost a playoff hole during the Section I tournament on May 18 at the Westchester Country Club in Harrison.

Ben Adi tied with Matthew Choe of Scarsdale as the last of nine players who would advance after each shot 160 in two 18-hole rounds. Ben Adi will serve as the first alternate.

Luke O’Grady-Rodgers of Carmel, who finished third in the field with a 154, was among the players who advanced. Sean Flaherty of Arlington High School won the title with a 145.

Haldane competed in the Northern County Championship on May 19 to 21 at Arlington High School.