“I’m maybe more earthy — more on the ground than in my head.”

That self-assessment comes from Fruma Shrensel, whose exhibit of oil pastels, The Shape of Color, opens at the BAU Gallery in Beacon with a reception from 6 to 8 p.m. on Saturday (June 11). 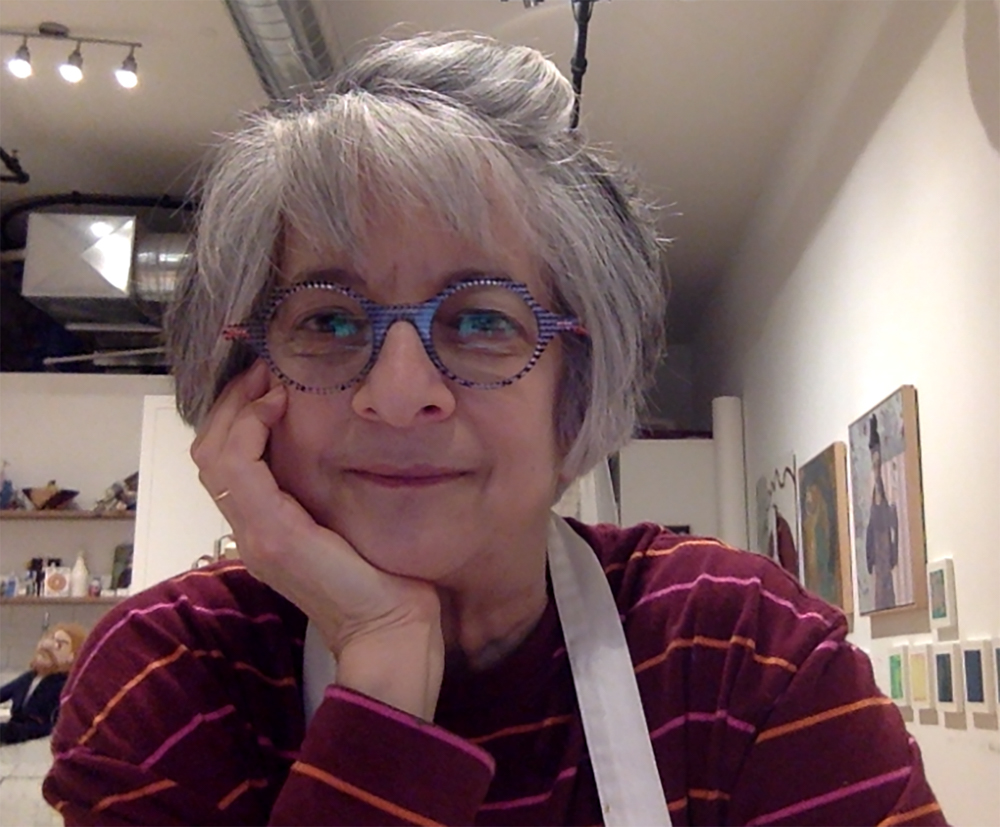 Shrensel professes she doesn’t overanalyze her work. “Trying to understand and explain myself is challenging,” she says. “For me, my art is not intellectual. Instead, it’s more remedial, physical. The process of creating can calm the nervous system. Without that, I don’t feel balanced at all. It also provides a vehicle to be present for a brief moment, not in the past or future.

“In childhood, there was a big pleasure factor in making art; I was always obsessed with it,” she adds. At college, initially Carnegie Mellon in the early 1970s, she questioned her studies.

“The teaching was moving away from figurative work, and there was a lot of confusion, conceptually, overall,” she recalls. “It wound up being a free-for-all, and I didn’t find it helpful. I thought, ‘Why do art? There’s too much of it already!’ ”

Shrensel traveled the world to search for the meaning of life, which she concedes “I still haven’t found. But I was always working on some kind of artistic project.”

Upon her return, she mixed what she describes as a “vagabond education” in New York City at places such as the School of Visual Arts and the Art Students League. To pay the bills, she worked in graphic arts and in commercial printing until she says digital innovation in those fields felt like a constant barrier.

“At 40, I was a beginner,” she says. “Also, when you reach 40, you’re too old to catch on to the trends. I learned Photoshop and other programs but I felt like I couldn’t catch up.”

At 49, she decided to go to nursing school. “I hated advertising, and nursing seemed like the opposite of all that,” she says. “It wasn’t a natural fit, and it’s not easy, but I wanted to be hands-on, helping people in a very basic way.”

In some ways, nursing did connect to her life in the arts, she says. “Many artists have ideas that motivate them. For me, as I’m working, it connects to ideas of being alive, but not in an intellectual way.”

Shrensel worked as a nurse for a few decades in Seattle, where she had moved when her husband found a job there. During that time, she often focused on artist books. “I always loved books and making books — sewing, gluing — practically going back to kindergarten. Making books is a broad area, so you can include a lot of illustration and it can be done in pieces. It’s different from painting, which, for me, requires a consistency of time I didn’t always have.”

In her books, Shrensel incorporates many forms and implements, including letterpress, relief printing, stencils, mixed media and digital output.

Whatever its form, there’s a visual consistency in Shrensel’s art — one can tell it’s a Shrensel. That sometimes vexes her.

“I find that there are so many different styles I’m interested in, I try to analyze and copy yet the work always kind of looks like me,” she says. “I’m frustrated by that at times and want to try something else. I haven’t mastered it.”

A planned move East was delayed when her husband “un-retired.” They found Beacon through explorations at Storm King and Dia. She moved first, in March 2020, right before the lockdown, and found a job as a nurse at a prison.

“It was sad, actually,” she says of the experience. “The saddest part was seeing how dysfunctional the government is in creating and enforcing the system. The prison was designed for [people incarcerated for] moderate-level crimes. As other prisons closed, they shuttled other prisoners in and it became difficult: There were never enough officers or supplies.”

To counter that, and to connect with other local artists, Shrensel joined the Beacon Artist Union collective in January. For her show, she decided to “go back to basics, shape and color. The composition was initially just two colors, but after a while it became more challenging, starting with a circle, a cube. Then I fell into this whole series, which includes taking sections of Hebrew letters and using those shapes. If you look into it a little bit, they all have an existential basis that applies to the spiritual world and life. Plus, the shapes themselves are so beautiful.”

The BAU Gallery, at 506 Main St. in Beacon, is open from noon to 6 p.m. Saturdays and Sundays, or by appointment. See baugallery.org. The Shape of Color continues through July 3.