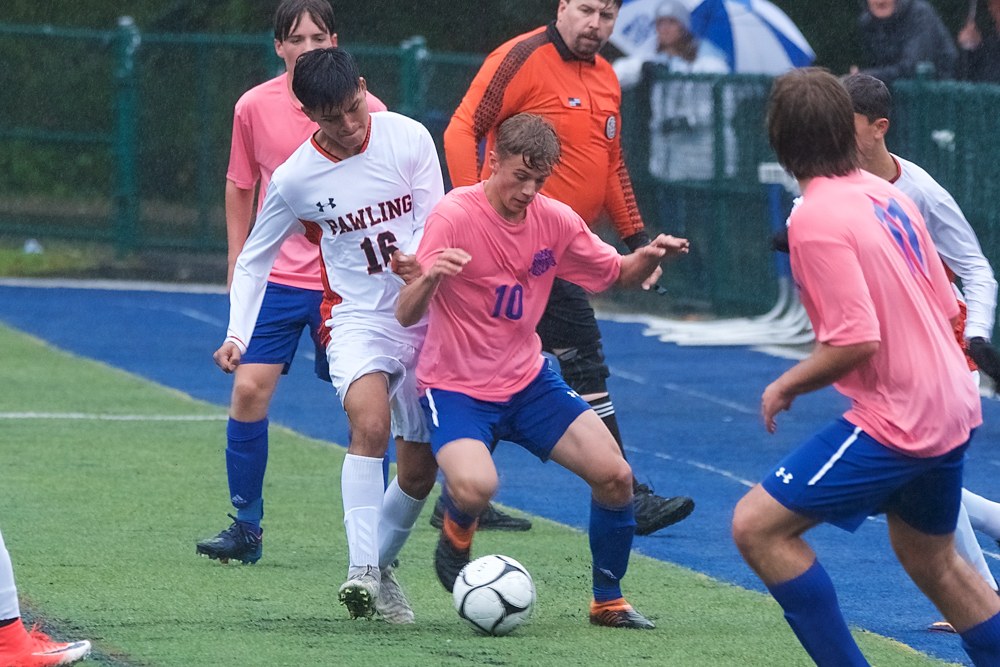 Matt Silhavy (10) controls the ball during Haldane’s victory in the rain on Tuesday. (Photos by S. Pearlman)

Haldane continued its strong play on Tuesday (Oct. 4), shutting out Pawling in a dominant, 8-0 performance during a steady rain. That followed a 3-0 victory on the road last week over Croton.

The Blue Devils’ win on Tuesday was their eighth straight. Ryan Eng-Wong scored twice (to bring his season total to 23) and added an assist; Matt Silhavy had two goals and two assists; Clement Grossman had a goal and two assists; Liam Gaugler and Max Westphal each had goals; Brandt Robbins had a goal and an assist; and Rhys Robbins had one assist.

“With a wet surface, things can go either way,” said Coach Ahmed Dwidar. “But we came out with a lot of fire.” 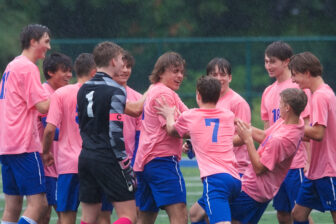 On the defensive end, keeper Ronan Kiter stopped three shots; Haldane has given up only five goals this season. “Our defense has been phenomenal,” Dwidar said.

Against Croton, Haldane got goals from Eng-Wong, Westphal and Grossman, with Silhavy and Luca van Dommele delivering assists. Kiter had four saves.

“That was a statement win,” said Dwidar. “Croton won the league last year, and they have a grass field that can be tough to play on.” Neither team had scored 40 minutes into the game, “but after we chatted at halftime, we put three in the net,” he said.

“We have some special talent at every position,” he added. “But it’s not how you start, but how you finish. Our No. 1 goal is the league [title], then the section.” 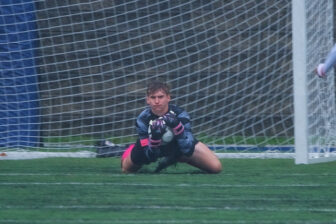 Blue Devils keeper Ronan Kiter makes a diving save Tuesday during the win over Pawling.

After finishing with a losing record last season, Beacon has been on the rise this fall, with the Bulldogs winning their fourth straight this week (and sixth of their last seven) with a 1-0 verdict Monday (Oct. 3) at home against Newburgh Free Academy. Beacon also defeated Cornwall, 1-0, in overtime last week at home. 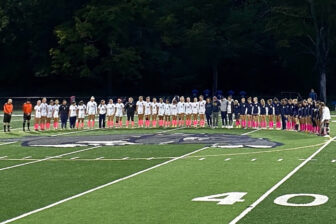 Beacon and Newburgh’s girls’ soccer teams paused for a Moment of Unity in response to a recent shooting at the Newburgh high school. (Photo by John Giametta)

In Monday’s thriller against Newburgh, Beacon got the winner with 20 seconds left in regulation when Rory Ladue took a free kick from Sara Gonzalez and sent it to Julie Whittemore for the score.

Coach Mike Lentini said his team didn’t lack scoring chances. “We had lots of opportunities in regulation and finally sealed the deal,” he said. “NFA played well, and their keeper made some really good saves.”

Keeper Hope Cleveringa had six saves for Beacon. “She kept us in the game,” Lentini said. “Our back line — Sara Gonzalez and Kasey Senior — were also great and Noelle Haase and Ladue played strong.”

Against Cornwall, the Bulldogs got a “golden goal” victory 3:50 into overtime to end the game. Devyn Kelly scored the winner with a header off a corner kick from Olivia Del Castillo. Cleveringa had six saves.

Lentini, in his first year at Beacon, has been impressed with the team’s turnaround. “They’re in a good mindset,” he said. “They’re starting to believe in themselves.”

Beacon defeated Port Jervis on Thursday (Oct. 6), 3-0, behind goals by Whittemore, Devyn Kelly and Reilly Landasi, to improve to 8-2-1 (5-1 league). The team is scheduled to travel to Goshen on Tuesday and Minisink Valley on Thursday.

Haldane dropped a pair of games this week, falling 8-1 on Oct. 1 at Bronxville and 6-0 on Monday at Franklin Roosevelt. Marissa Peters scored against Bronxville and Ruby Poses had 15 saves in net. Poses stopped 13 shots in the loss at FDR.

The Blue Devils (4-6) will visit Putnam Valley today (Oct. 7) and Pawling on Tuesday.

Haldane traveled to Rye Neck on Oct. 1 and treated the host rudely, dropping three touchdowns on the Panthers in the first half on the way to a 41-16 win.

The Blue Devils’ offensive line opened running lanes, and Evan Giachinta took advantage, collecting 221 yards on 15 carries. Quarterback Ryan Van Tassel ran for 152 yards on 11 trips and was 7 of 9 in the air for 135 yards. Thomas Tucker and Mike Murray had receiving touchdowns, and Tucker added an interception.

Haldane got a 53-yard TD strike from Van Tassel to Tucker, and a 20-yard Giachinta score in the first quarter, adding two-point conversions each time. A 26-yard run by Van Tassel in the second gave Haldane a 22-0 halftime lead, in what Coach Ryan McConville called a “complete” performance.

“That was a huge game for us,” McConville said. “Giachinta and Van Tassel were both outstanding, and we controlled the game on the ground. Mike Murray did a great job, and Tucker and Luca DiLello (two receptions for 40 yards) both made some big plays. And our defense was solid.”

Beacon fell, 42-7, on the road Sept. 30 to a strong Goshen team. The Bulldogs scored on an 87-yard kickoff return by Javan Verdile in the fourth quarter.

Leibenson Perez-Novas had 38 yards rushing for the Bulldogs and added seven tackles. Owen Lynch, Mike Varian and Mercer Jordan each had five tackles.

“Goshen is much improved from last year, and we just couldn’t match up with them physically,” said Coach Jim Phelan.

Beacon traveled on Tuesday (Oct. 4) to compete in the inaugural, five-team Woodstock Invitational at Monticello, where the boys’ team took first.

For the girls, Rachel Thorne finished fourth and Elizabeth Carbone was 21st. Beacon also brought along its modified teams and had the top finisher in both the boys’ (Caellum Tripaldi) and girls’ (Cecelia Allee) races.

“All jokes aside about racing in muddy conditions at Woodstock, I was proud of how the team responded to the conditions,” said Coach Jim Henry. “It was the second heaviest downpour I’ve had the ‘pleasure’ of racing in during my two decades of coaching. At some point, you just give up trying to stay dry, embrace the conditions and gut it out. A great deal of character was developed during that invitational, for all of the participants.”

Two Beacon cross-country alums also recently made the news. The State University of New York Athletic Conference on Sept. 19 named Evan LaBelle as its men’s cross-country Athlete of the Week. The SUNY New Paltz freshman won the first 8,000-meter race of his college career at a home invitational at the Hudson Valley Sports Complex, finishing in 28:40.3.

On Oct. 2, for the second straight week and third time this season, SUNY Cortland senior Ryan Cory received the same honor following his victory in the white division of the Lehigh University Paul Short Run. Cory, who has won three races this season, finished the 8,000-meter course in 24:54.9.

Haldane picked up three wins this week, blanking North Salem, Pawling and Croton to lock up the league title, but dropped a 4-1 decision to Briarcliff.

Two doubles teams — Caroline Nelson and Mairead O’Hara, and Fiona Shanahan and Ellen O’Hara — will compete this weekend at Harrison High School in the individual sectional tournament. It will be the third trip to the tournament for Nelson and O’Hara, who two years ago reached the finals before falling to a team from Croton.

For the team tournament, Haldane (9-4, 7-2 league) should receive a high seed. Nelson is 10-1 in second singles and the doubles team of Ellen O’Hara and Amanda Johanson is undefeated.

Beacon defeated Cornwall, 4-3, fell to Monroe-Woodbury, 5-2, and defeated Goshen, 4-3, to improve to 7-3 (4-0 league) and qualify for the first time as a team for the Section I tournament. The Bulldogs close the season today (Oct. 7) with a showdown at league rival Washingtonville (8-1, 4-0 league).

On Sept. 30, Beacon defeated Monticello, 3-1, behind strong serving from Demi Sela and Daveya Rodriguez. Lila Burke had 17 kills, Kiki Rodriguez had 11 digs and Sela had 15.

The Bulldogs (7-5) will travel to Minisink Valley on Wednesday and host Cornwall at 6 p.m. on Thursday.