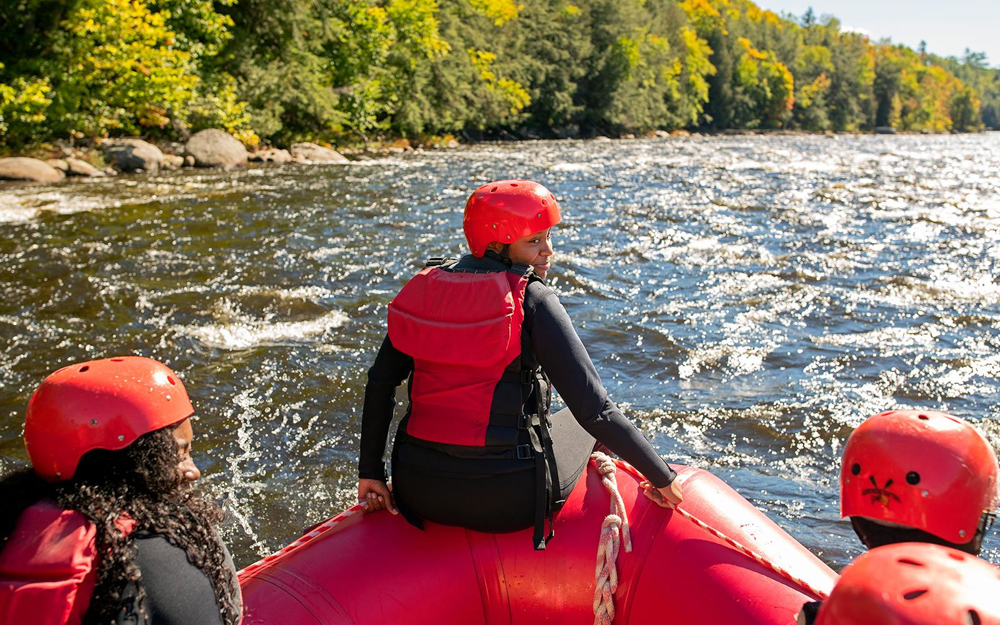 In the fall of 2021, a group of SUNY Potsdam students went on a rafting trip on the Indian and Hudson rivers organized by the university's Center for Diversity. (SUNY Potsdam)

A free electric bus that travels from urban areas to state parks. Halloween “hike and treat” events in the woods. Camping trips in which the gear is provided by someone who shows you how to use it.

These are a few of the initiatives highlighted in a newly released report, Open Spaces for All, produced by the nonprofit Open Space Institute and the New York Outdoor Recreation Coalition. The latter includes state and federal agencies such as the National Park Service and the state Department of Environmental Conservation, environmental groups such as Scenic Hudson and Riverkeeper, outdoor retailers such as REI and community groups such as the Catskill 3500 Club and Outdoor Promise.

When the COVID pandemic shutdown began in early 2020, the number of visitors to state and national parks increased dramatically. But park officials noticed the visitors didn’t reflect the racial and ethnic diversity of the region or the country.

For instance, 75 percent of the people who visited national parks were white, said Kathy Moser, chief conservation officer for the Open Space Institute. In response, the nonprofit reached out to other outdoor and environmental groups to identify barriers that were keeping people from the outdoors.

The most obvious were lack of transportation and specialized recreation equipment such as snowshoes or kayaks. But Moser said that one of the more surprising findings was that some people had uncomfortable experiences at parks.

“They didn’t see people that look like them there, the signage was confusing and there wasn’t programming that people wanted,” she said. Hearing this, a colleague of color said: “We don’t want to be invited to the table, we want to be in the kitchen, making the meal. We want to be sitting down with state parks and saying, ‘This is the kind of park we want,’” according to Moser.

The report recommends that the state be more proactive in reaching out to underserved communities to engage them in decision-making processes. Approaches include working with churches, health care professionals and community groups such as Black Girls Hike Buffalo, which has organized snowshoeing and hike and treats during the pandemic.

The state already runs a first-time camper weekend in which families can borrow equipment and receive assistance from parks personnel who demonstrate how to pitch a tent and tend a campfire. Moser said she would like to see the program expanded with assistance from outdoor recreation companies to include other activities.

“If you got to Bear Mountain and you wanted to learn how to snowshoe, is there a way that you could borrow snowshoes?” she said. “All that outdoor gear is expensive. What can REI or L.L. Bean do?”

The report also recommends that underserved communities be included in discussions about the locations of new parks. Gov. Kathy Hochul, for example, has advocated the creation of a Rochester High Falls State Park in downtown Rochester, which would allow access to the Genesee River gorge.

The report highlights the need to increase communication with Indigenous communities. The DEC recently announced the creation of an Office of Indian Nation Affairs, and the report recommends that the state parks department do the same. Once established, these offices would bring Indigenous “knowledge keepers” into the land management process.

OSI and the state plan to continue surveying visitors and collecting data in 2023 to implement the recommendations. In the meantime, Moser said she hopes local organizations will be inspired by the findings and examples.

“It doesn’t have to be New York State implementing this,” she said. “It could be a county or a municipality that can implement this in their own park system.”

The report is available at openspaceinstitute.org.