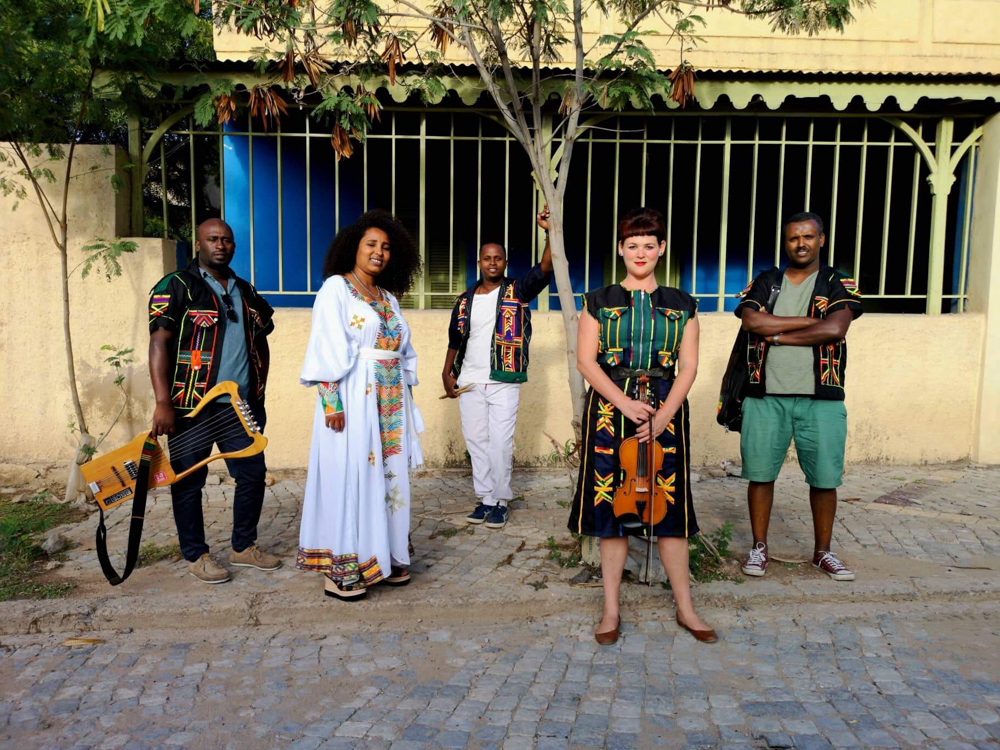 Ethiopian band to perform at Howland

A decade after its founding, Qwanqwa, a band that improvises on traditional African instruments, is finally bringing its music from Ethiopia to the U.S.

After a two-year-delay because of the pandemic, the four Ethiopians and one American who comprise the group are in the middle of a 23-state, 48-date tour, which includes a performance at the Howland Cultural Center in Beacon at 8 p.m. on Nov. 5 that’s sponsored by Fridman Gallery.

Qwanqwa translates as “language” in Amharic, the official language of Ethiopia; its members chose the name because of their goal of “creating musical dialogues between cultures.”

Their instruments include masinko (a one-string fiddle), the lyre-like bass krar boom and kebero (a goat-skin drum).

According to Kaethe Hostetter, the lone American, who plays a five-string electric violin, “we’re using additional instruments and a specific style of vocals, which comes from the Asmari [Ethiopian string players] tradition.”

She notes that they are rudimentary instruments, made of goat and sheep skins, horse hair, olive wood, oak, combined with guitar strings and metal for the stands and body of the drums. “Then there are pick-ups made from things we’ve found, like a bicycle bell,” she says.

“The repertoire that we draw from are public domain melodies and chants from ceremonies,” she explains. “We pull them apart, extend them. We’ll start with the melody and it becomes a noisy solo, without any notes. We innovate using tech pedals. We are playful onstage. We latch onto benchmarks in our songs. We have arrangements, but no one reads music. We know the next song on the set list but it can start in many unplanned ways.” 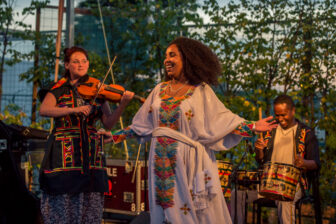 Qwanqwa has released three albums. They’ve played festivals in Europe but also venues in Addis Ababa, Ethiopia’s capital, that ranged from a club in a vintage hotel to spaces with dirt floors lit by a single lightbulb.

Craig Wolf of the Howland Cultural Center says he is glad the concert is finally happening. “I contacted Qwanqwa in November 2019 to book them for the fall of 2020. Along with the pandemic, Ethiopia is a war-torn spot on the globe. We could hardly be more thrilled than to have this amazing opportunity to bring in a hot band from halfway around the world.”

Hostetter says she discovered Ethiopian music in Boston through a friend, Danny Mekonnen, whom she knew from the free jazz scene and “who was on a journey of discovering the music of his parents. We started a practice group to learn the music, then make food, then play more music. This turned into a band [Debo Band] and we started touring and went on from there.”

Hostetter moved to Ethiopia in 2009 to immerse herself in its musical traditions and lived there for 11 years. She returned because of the pandemic, which coincided with the outbreak of civil war. She’s only been back to Addis Ababa once, to “officially move out, after leaving so suddenly,” she says.

“I was there for a month, during a relatively stable period, but with the knowledge that ethnic clashes could arise at any time,” she says. “Two days before leaving, places where I’d been had turned into hot spots. It hit home when a friend said to me, ‘It’s good your flight is tonight.’”

Since then she’s heard from friends that “music-wise, Addis is in some ways untouched, and they’re playing their shows, but there’s an underlying feeling [of dread] all the time.”

That this debut U.S. tour is going well, with sellouts, is especially satisfying to Hostetter, she says, because it caps “a long period of anticipation, saying no to other things, getting the visa process underway, having so much momentum, and then it all came to a halt.”

The Howland Cultural Center is located at 477 Main St. Tickets to see Qwanqwa are $20 at onthestage.tickets or $25 at the door.