A driver who arrived on a Saturday in September to empty a 350-gallon vat behind One More Bite filled with grease found the lock broken and the container empty.

Tom Labelle, who owns the Beacon restaurant, was not surprised. Used cooking oil can be recycled into fuel, and companies like Buffalo Biodiesel will pay for it. 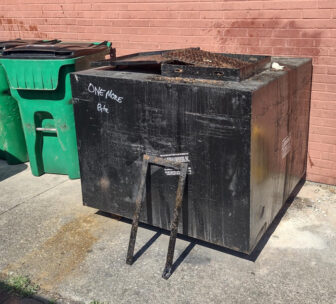 The lockbar (foreground) was removed to gain access to the grease vat behind One More Bite. (Photo provided)

Labelle had been hit before. Before he contracted with Buffalo Biodiesel, thieves emptied an unlocked vat provided by another company, he said. “I knew [it was gone] because there was a little trail of oil outside the container.”

The grease thieves usually arrive at night in box trucks or vans and equipped with crowbars, bolt cutters, hoses and holding tanks. Losses nationally rise into the millions of dollars annually, according to the North American Renderers Association, a trade organization for companies that recycle waste and food byproducts.

For decades, waste from restaurant kitchens has been used in products such as soap and animal feed but now is also recycled into biodiesel, an in-demand renewable replacement for petroleum-based diesel that can be blended with heating oil, gasoline and jet fuel to reduce carbon emissions.

Buffalo Biodiesel’s drivers and the businesses it contracts with have reported 4,000 thefts so this year, including dozens in Dutchess and Putnam counties, said Karina Baldwin-Koch, a marketing manager with the company.

At One More Bite, the thieves stole 200 gallons, worth about $800, and in August the Beacon Bread Co. lost 175 gallons worth $700. In both cases, Buffalo Biodiesel filed police reports. Business owners are often unaware of the thefts until drivers arrive to empty the vats. The company operates in 12 states and “on a slow day” will record about 25 thefts, Baldwin-Koch said. 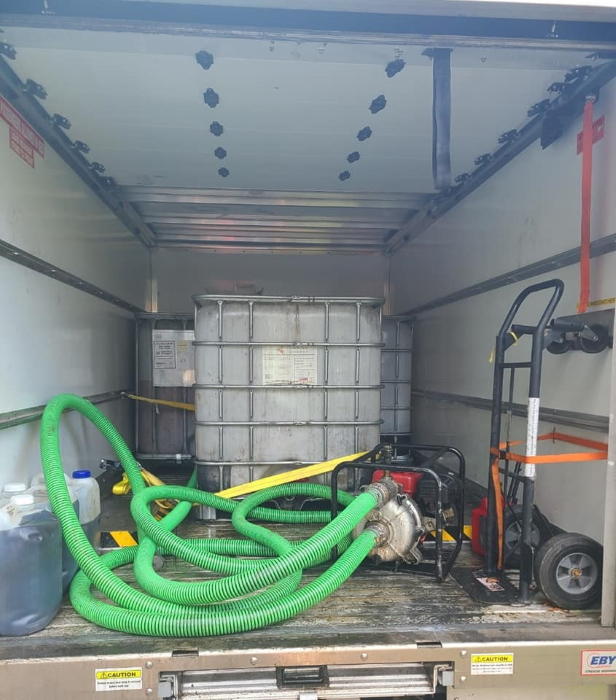 People do get caught. Two men and a woman, all from Yonkers, were arrested last month and charged with using a Home Depot box truck to steal grease from a restaurant in Red Hook at 10:30 a.m. on a Wednesday morning. Police said they suspect that the truck was used in other thefts in the weeks leading to the arrest.

“Usually, the people who rob this stuff are smart enough not to come in broad daylight,” the restaurant’s owner, who did not want to be identified, told the Red Hook Daily Catch. “Clearly, these people were not very intelligent.”

On Oct. 4, the Ulster County Sheriff’s Office announced the arrest of two other Yonkers residents accused of stealing grease from a restaurant in Esopus. And in June, an officer with the Saugerties Police Department found a pumping system and containers filled with grease in the back of a van he pulled over for traffic violations.

The officer searched the vehicle after detecting “a strong odor of oil” and noticing that the passenger was wearing latex gloves. The driver and passenger, both residents of New York City, were charged with misdemeanor criminal possession of stolen property.

Police suspect that some people who have been arrested are members of an organized ring. One syndicate was dismantled when federal prosecutors charged 21 people in June 2019 with using box trucks to steal grease in North Carolina, Tennessee and Virginia to sell in New Jersey.

One of the suspects, Alvaro Mendez-Flores, was sentenced in May 2020 to 41 months in prison and ordered to pay $4 million in restitution.

A detective with the Town of Ulster Police Department told the Daily Freeman in Kingston that the FBI was investigating whether the thieves arrested recently had inside help from biodiesel company drivers.

The demand for grease has been growing with the demand for biodiesel, a market that has increased from 90 million gallons in 2005 to 1.65 billion gallons last year. In the short term, the cost of diesel has played a role; the fuel is 52 percent more expensive than a year ago, according to New York State.

“We have a lot of people that ask where they can buy it locally, because they’ve started converting their vehicles” to use it, said Baldwin-Hoch.

The demand should continue. As of July 1, New York State will begin mandating that heating oil contain at least 5 percent biodiesel, with the requirement rising to 10 percent by 2025 and 20 percent by 2030.

At its plant in Tonowanda, just north of Buffalo, the firm also processes expired butter, mayonnaise and salad dressings collected from supermarkets. In addition to biodiesel, the process creates glycerin used in soaps and cosmetics and a sludge used in animal feed.

“You can always tell when we’re doing our processing” because of the odor, said Baldwin-Koch. “Some days it smells like chicken.”