When Micah Morales brushed the dust off her father’s secondhand camera almost five years ago, she couldn’t have imagined where the Canon EOS 70D would lead her. 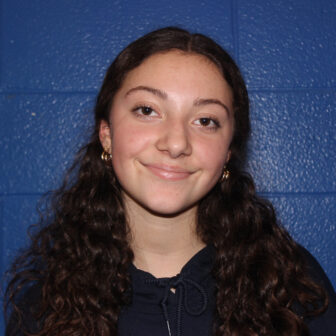 On a whim, Micah, now a sophomore at Haldane High School in Cold Spring, started taking photos at the Hampton Classic, a prestigious horse show in the Hamptons, where her family travels annually. “I immediately started loving it,” she said. “And I knew that I wanted to use the camera more.”

Though Micah experimented with other forms of photography during the pandemic shutdown, she was drawn to capturing movement. This fall, Micah began to attend Haldane athletic games, camera in hand. Soon after, she created an Instagram account (@MicahMoralesPhotography) to share her work.

Her photos and videos promptly appeared on the pages of Haldane teams and players, and circulated throughout the community.

It’s a win-win for the photographer and her subjects. Micah’s content gains popularity, and the athletes, many of them chasing scholarships, can bolster their portfolios. “I know so many of the athletes that I thought it would be cool for them to be able to see themselves,” Micah said.

Although Micah receives occasional help from an uncle who shares her interest, she initially struggled with some of the technical aspects. But through trial, error and YouTube, she’s learning. Being in a low-stakes environment helps, as well. “Because I know everyone, I can experiment with angles and lighting and all that stuff and not feel so much pressure,” she said.

Micah not only snaps photos, but also attempts to record fleeting moments on video, such as goals and touchdowns. Still, it’s sometimes difficult to anticipate the switch between mediums. “I know the capacity of what my lens can do,” she said. “And what I can do as a photographer.”

After collecting content, Micah deletes shots that are blurry, overexposed or have too much contrast. She keeps an eye out for more impressive videos, or ones that include a particularly animated reaction from spectators.

Photography inspired Micah, who plays lacrosse, to attend more of her classmates’ games and deepened her understanding of other sports, like football and soccer. Coach Ryan McConville invited her to attend football practice to learn about the plays being run and the “background behind all of it.” 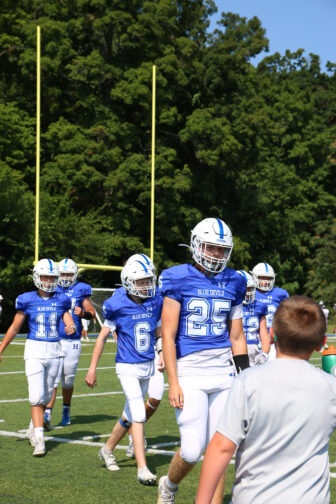 In past years, football photos were usually taken by parents. This fall, McConville hoped to increase student involvement while establishing a strong social media presence for the team. After connecting with Micah, he offered her sideline access and helped coordinate events to cover, such as homecoming. “She captured the game-winning touchdown,” McConville said. “It will be something that no one forgets.”

As Micah’s camera has steered her closer to the bench, she has cultivated relationships with many of her subjects, and feels fortunate to see teammates bonding. “I’ve seen everyone have really, really high moments and really, really low moments,” she said. Now, players and coaches often reach out to share schedules or extend invites to practices and team dinners. “I feel as if she became a part of the team,” McConville said. “Everyone’s respect and admiration for her work grew over the season in a positive way.”

Micah is saving up for a “super-nice lens” and plans to continue covering sports until the end of high school — and, hopefully, college. She dreams of pursuing professional fashion photography, specifically editorial work for magazines. “I’m trying to promote the stuff that I do as much as possible, because I want to make a career out of it,” she said.