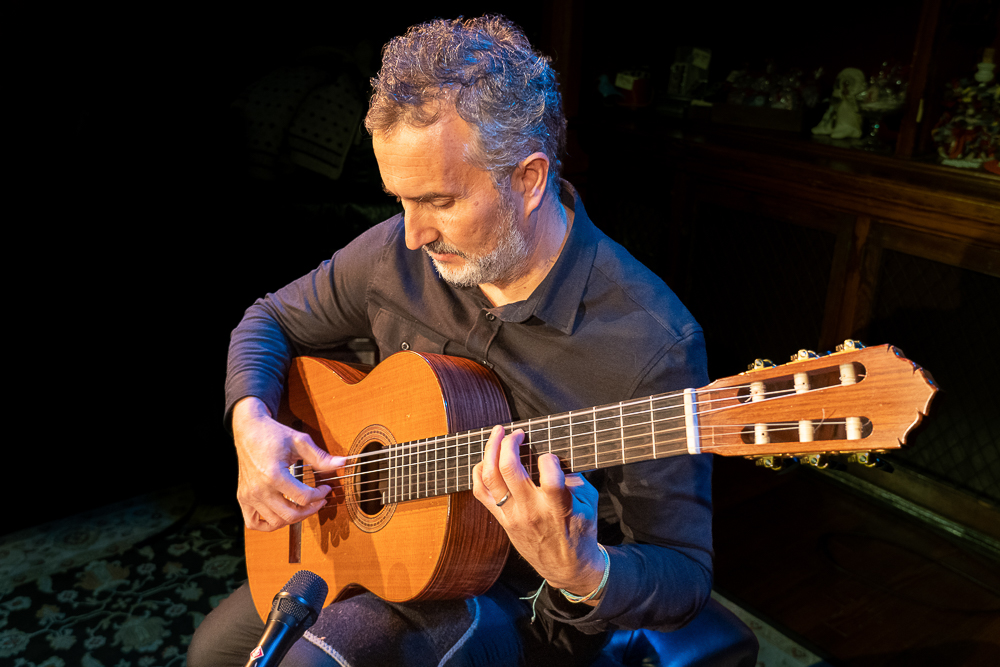 Dan Garcia thrives on mixing things up. As a professional musician, he is able to fine-tune a balance with work and play.

“Too much of one, I get a little cranky,” says the guitarist, who has lived in Beacon full time since March 2020, when the pandemic compelled his family to make the move from Brooklyn.

Garcia specializes in classical and flamenco playing but also plays everything from Latin jazz to rock. He finds himself booked in New York City several times a week while juggling guitar and music production instruction at Manhattan College and lessons for younger students at his Maple Street Studio in Beacon.

Throw in the occasional wedding and gigs with Black Magic, a Santana cover band, and the pot is full.

Garcia grew up in Madrid. At age 20, he enrolled at Indiana University to study music and continued at the University of Cincinnati, where he earned a master’s degree in guitar.

The instrument has long been a part of his life. When he was growing up, “there were always a couple of guitars lying around the house, including one I still have,” he says. “My godfather was an amateur classical guitarist. I asked him: ‘How do you do what I can do on recorder, with a guitar?’ He showed me. I was 10 and had a vision: ‘I want to learn, whatever it takes.’

“He gave me lessons once a week, using nothing written down; it was all from memory. I did this from age 10 to 13. Then, being a typical teen, I turned to electric and rock. I got back into classical guitar when I was in high school.”

Once settled into New York City, Garcia spent 22 years living and teaching in Brooklyn. “The beginning [in 1998] was tough” because he lacked connections, and it was much more difficult to make them without technology such as cellphones and social media, he says. “I never left guitar, though.”

At Indiana University, which has a music conservatory — something Spain didn’t have at that time, according to Garcia — he honed more than just the ability to play the instrument. “A lot of musicians tend to think too much about the guitar and not enough about music as a whole,” he says. “Guitar should be the conduit to express music. I understand harmony, which I can use in many forms, including jazz and classical.

“I have heard that around 30 percent of trained musicians never pursue their craft. It took me three years to have a career in music. Many others were better connected, and could dive right in. But I never had to get a full-time job [in another field], for which I am grateful.”

Once Garcia broke through, there was plenty of work, including in the studio. “I got busy for many years, particularly playing classical or Latin jazz, Brazilian jazz, Cuban, a lot of Spanish music, too, which I still do.”

“I love playing classical guitar, then a few days later in a guitar duo, with a singer,” he says. “This keeps my musicality alive and interesting. Not long ago I played a classical guitar concert at the Howland Cultural Center. It was a fantastic experience… In my circle, we do different things.”

After his family sold their home in Beacon and bought another, Garcia created Maple Street Studio (dangarciaguitar.com), where he teaches both children and adults. Many adults interested in lessons begin in confusion over the differences between classical guitar and flamenco, he says. According to Garcia, classical guitar doesn’t have to be Spanish, whereas flamenco is folkloric traditional music from Spain.

“People get confused by listening to music like the Gypsy Kings,” he says. “When people say they want to do flamenco, I interview them to see how much they know before they dive into it.” He adds: “A big part of my teaching is about staying motivated when you’re learning; most people give up because there are no goals.”