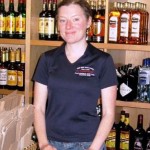 Is there someone in one of our local stores or businesses who always make you feel welcome, or well taken care of?  In Philipstown, we often interact multiple times daily with people we don’t know much about, but whose company we briefly enjoy. This is the first of a series of stories about that interesting person “Behind The Counter.”

“There’s a trust factor involved” in matching customer and wine, according to Michele Risko, who can be found at Cold Spring’s D. Yannitelli Fine Wines and Spirits (a/k/a Yannitelli’s) most afternoons and early evenings.  It has taken Michele years to build up that trust, incrementally.  Like many round these parts, Michele spent part of her childhood in Cold Spring, moved away, and then returned.

She has worked at Yannitelli’s for ten years, part-time for a spell, and full-time for the past six.  She landed in the wine business by accident: she was waiting tables at Riverview, when someone told her to “go talk to Don (Yannitelli) at table 3—he needs someone to babysit the store a couple of days a week.”  There was one hitch:  she was only twenty at the time, and wasn’t legally old enough to be employed in a liquor store!

After she turned 21, she found a home at Yannitelli’s, which Michele says is one of, if not the first, liquor stores to open in New York state after prohibition. Founded in 1933, Yannitelli’s has not changed hands since, and is truly a family business, with “wife, mom, Don, sister-in-law and me doing it all: cleaning, stocking and selling.”  As Michele tells it, “Don took over just when wine started taking off, with the California wine explosion.

His Uncle Al asked him ‘why are you messing with the American ones?’—well they became the American palate. Don’s mission is to bring in inexpensive wines; everyone is on a budget.”  Michele describes the Yannitelli customers as sophisticated, with few coming in and asking for cheap, sweet wines.  “The customers will tell you if they don’t like something.  It’s fun to turn them on to new grapes.”  Speaking of new grapes, what’s “in” right now are Albarií±os, from Spain, New Zealand Sauvignon Blancs, and “the Proseccos are very consistent.”  But Yannitelli’s “doesn’t get affected by fads.”

Most people come in and say “pick something out for me.”  “I’m careful not to steer them in the wrong direction. They tell me what they’re eating, and ask for something new and interesting.  I have people call me from the train: ‘I’m arriving on the such and such, can you put a bottle in the fridge for me?” And oh, the fridge.  That’s Michele’s “baby.”  She has taken ownership of the fridge, and keeps it stocked with over 100 bottles at a time, all carefully arranged by type and region.  Beware to those who mess up the order of the fridge! Michele tends to the needs of her ‘baby.’

When asked what the most common mistake is, in choosing a wine, Michele replied: “The vocabulary.  For instance, I’ll suggest something fruity, and they’ll say they don’t like sweet wines, but fruity doesn’t mean sweet—it’s aromatic.  I try to put things in layman’s terms.”

Yannitelli’s also works with quite a few serious local wine collectors.  Those very pricey bottles lining the wall are usually destined for their cellars, and there isn’t a lot of impulse buying involved, but rather “consultations and selection by these discerning customers.” The “craziest” bottle ever in the store according to Michele: “A $1,200 Screaming Eagle three-pack.  I wasn’t there when it was sold.  Donny sold it, of course.”

So what’s the best thing about working in Philipstown?  Michele does not hesitate: “All the customers are your neighbors.  I know everyone’s story and I can keep it in mind when they shop.”

3 thoughts on “Behind the Counter: Michele Risko at Yannitelli Fine Wines”