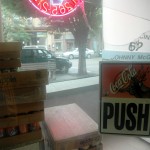 Missing glass attests to the damage at Ming Moon Kitchen during an overnight break-in July 13-14.

A cafe and a tavern on Cold Spring’s Main Street suffered break-ins and thefts the night of July 13-14, each losing about $400 in money or equipment.
On Wednesday afternoon, proprietors of Ming Moon Kitchen and McGuire’s on Main confirmed reports that they had been hit. Both told Philipstown.Info that they had contacted the Cold Spring Police Department, which is investigating.
Ying Guo, owner-manager of Ming Moon, at 106 Main St., said thieves stole $400 and broke the glass in the front door. A gaping crescent-shaped hole in the pane bore witness to the damage. She said she had run the small Chinese cafe-takeout for about 21 years and found the experience enjoyable for most of her tenure but that things in the last two or three years had been “different.” In an earlier incident, someone stole about $500 from Ming Moon, she added.
Meranda McGuire, owner of McGuire’s, at the corner of Main and Stone Streets, said thieves “broke in and stole our whole cash register right off the counter,” after 1 a.m. Wednesday when she closed for the night. “That’s all they took.” Even then, because “we don’t leave money on the premises,” the culprits got only a handful of pennies, left in the cash register. But she said the machine itself is worth about $400 and she must also pay for repairs to the part of the building where the break-in occurred. She declined to give the precise location, lest someone attempt a repeat performance. However, she noted, when she arrived for work around 9:45 Wednesday morning both the front and back doors were still locked.
She and a couple of patrons recalled similar thefts along Main Street in the not-too-distant past. “This has been an ongoing affair in this village, for a year and a half, that the police can’t seem to get under control,” McGuire said. “They tell us to leave our lights on. Leaving lights on is not solving our problem.” She recommended that the police park their cars on the street and patrol on foot up and down Main Street with flashlights, keeping an eye on shops.
Commanding Officer George Kane of the Cold Spring police said Wednesday afternoon that he “cannot comment on any open cases” but promised to provide information at an appropriate time.