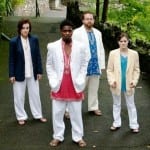 To act or not to act?  The oft-repeated pearl of wisdom is “if you have to ask yourself if you want to be an actor, you shouldn’t be one.”  The eight apprentices this season at the Hudson Valley Shakespeare Festival (HVSF) have likely gone beyond asking and into the “something I must do” realm.  Rachel Ritacco, of Garrison is one of them.  Rachel, soon to be a senior at State University of New York, New Paltz, was thrilled to have been selected from the 160-plus young actors from around the world who expressed interest in becoming apprentices this season.
Associate Artistic Director/Director of Education Chris Edwards, familiar to many as an actor in HVSF productions over the years makes the selections.  Edwards describes the goals of the program as two-fold: “We have a commitment to training young actors for the theater.  This is the only apprentice program in the country where they just act. We view it as giving back to the theater community, and at the same time training these actors in our style and sensibility with Shakespeare.  Also, we then have a way to support the festival by bringing in young actors with a certain skill level to play the smaller roles each season.”  Apprentices frequently go on to become involved in HVSF’s touring and educational programs during the non-summer months.
The apprentice program runs for 17 weeks, from May through early September.  The six to ten apprentices chosen each year begin the season in New York City, starting a week after the regular company assembles for rehearsals.  Apprentices are responsible for arranging their own city 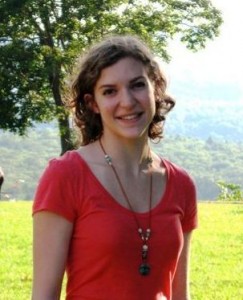 housing. For Ritacco, this introduction to what she hopes will be her future life as an actor was part and parcel of the whole experience. “I stayed in Astoria, and I loved getting a taste of the world’s gateway and seeing what city life is like and getting familiar with it.”  Rehearsals take place six days a week at the Atlantic Theater Studios in Manhattan.  The three weeks spent there allow the directors to get to know the apprentices better, and the apprentices to watch the professional cast during the early stages of rehearsal. Everyone then moves up the Hudson to begin working on site at Boscobel, the historic mansion just outside of Cold Spring where the company performs on a tent on the lawn.  Many company members and apprentices stay in dormitories at a nearby college, with company transportation provided each day, so that it does feel like a 24/7 group bonding experience.
The apprentices spend the greater part of the day in training. “They work their tails off, constantly doing things, taking risks, pressing themselves creatively,” says Edwards. “Even if they decide not to be an actor, this is an amazing amount of practical experience. We want them to have a full toolbox.”   The classes they take are surprising, in that they include not just the traditional vocal and physical work associated with stage training, but such offshoots as flamenco dancing, stage combat, impulse work, stand-up comedy, and yoga along with monologue and scene study and instruction on the “tricks of the trade” —the practical things entailed in making a life as an actor in New York.  Oh, and they also understudy major roles, and then there’s the “Apprentern” show, wherein they perform yet another Shakespearian production, this time in the leading roles.
It’s a long, full day, according to both Edwards and Ritacco, as apprentices mix the classes with rehearsals for their show, grab a quick 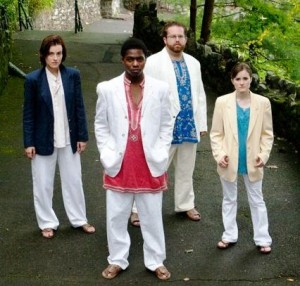 dinner and then head to the tent for the evening performance, returning to the dorms at 10 or 11 each night.  And they love every minute of it.  Says Ritacco: “The amount of things we do is amazing.  I’ve also been pleasantly surprised at how the company is so familiar with each other, with such a sense of camaraderie and family.  Everyone’s been really helpful with any questions.  They’re humble and welcoming.  As actors who have been working with the classics, they provide us with such insight into both performance, and the whole working/auditioning process we will be starting.”  Edwards includes the “business” side of things in his description of the program’s assets as well, noting “We have what we call the coffee house series, where we bring in an actor from the company to talk about how to make a life in the theater, or what grad school is like.”
The program is competitive as the number of applicants has grown through the years.  Originally the apprentices were high school age, and local to this area, but the focus has shifted to those in or recently graduated from college, and there is always a steady supply of applicants from institutions with noted drama programs, such as the University of Minnesota, the New School, Vassar, New York University and Carnegie Mellon.  This year inquiries arrived from Australia, England and Canada, all the more remarkable, in Edwards’ words, as “we don’t do any marketing.  Most people find out about it through word of mouth or our Web site.”  Not all applicants have extensive background in Shakespeare, but, according to Edwards, “people who have a talent for it seek us out because they love Shakespeare.  We look for the type of actor who can let go of the Shakespeare hang-ups of talking too eloquently.  Some can make the switch.  We find people who are good storytellers, who can tell the story clearly without embellishing.”
Rachel Ritacco was familiar with the program from her years growing up in Garrison, attending HVSF performances annually.  “My mom would take my sister and me to the festival—it was a yearly tradition.  Certain productions I would understand more than others, but always the conversational style made it accessible to me growing up.  It was a nice way in to understanding Shakespeare.”  The other 2010 apprentices are Earnest Bentley, Connor Carew, Sam Dash, Mikaila Jo Krantz, Denver Milord, Morgan Rosse and Vanessa Walsh.  All of them showed their comedic chops doing stand-up last Saturday at the cabaret night of the HSVP/Depot Theatre “In Process” series. Trained by HVSF actor Jason O’Connell, they displayed plenty of moxie as their riffs bounced all over the place, from the power of the mind to squirrel infestations to Barnes and Noble employee/customer interaction.
Zach Fineblum was a 2009 apprentice, and has now completed his first 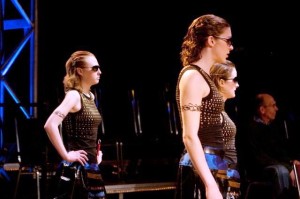 year as a “real working actor.” He is very appreciative of what the program brought him: “The HVSF apprentice program was the perfect experience for me coming right out of an undergraduate BFA acting program. Being able to watch experienced, awesomely talented professionals work and rehearse was invaluable. It felt like graduate school almost. I really learned how to rehearse a play at HVSF. I’ll never forget watching Chris Edwards come in one day with this amazing idea for Bolt, his character in “Pericles.” I thought for sure he had found his character. But the next day, he came in and tried something completely different, letting go entirely of the idea from the previous day. That blew me away—that ability to not hold anything too dear and to always push yourself to explore and try new things.”  Fineblum has just completed playing Jacques in “As You Like It” and Don Pedro in “The Rover” with The Shakespeare Theatre of New Jersey’s Next Stage Ensemble.
The crowning point of the season for the apprentices is their very own Apprentern show which will take place on Monday, Aug. 23 with excerpts from “Julius Caesar.”  This performance focuses on “language, not the trappings of concept and spectacle,” says Edwards. “We started three years ago with ‘Hamlet.’  It was a way to workshop the shows going out [in the educational and touring programs] in the spring.  We use minimal production values and try to break all the facades down.  In casting, we look to stretch the actors and put them in roles that they’re probably not going to get cast in professionally in the next 20 years.”  Ritacco has been cast as Calpurnia. “She’s bold and strong and I have an ingí©nue look so I might not get it normally.  It’s nice to see people stretched beyond their comfort zones.”  A wine-tasting and pre-performance talk on Caesar’s last meal precedes the performance, for which tickets are still available—call 845-265-7858.
This year the apprentice program has been extended into other facets of stage production, as HVSF’s lighting and costume designers, and company and stage managers work with college-age interns in their fields, the results being employed in the Apprentern show.  Intern Robert Fine is designing the lights, Chloe Goldberg the costumes, LeeAnn Lisella is the stage manager, and Liz Petley the company manager.
If the aim of the program is to nurture young actors with a bent for Shakespeare, and to develop a stable of young performers for future HVSF productions and workshops, the goal looks to have been achieved with Ritacco. “I would love to continue doing Shakespeare.  I’m definitely interested in the educational programs and the touring groups, or working with a regional theater in Shakespeare. Along with straight auditioning in the Off- Off- Broadway realm and exploring voiceovers, all of that.  This is a great door into Shakespeare, and I’m so grateful.”