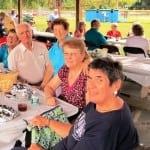 The group of seniors who attended this past Saturday’s (Aug. 21, 2010) Cold Spring Seniors’ Picnic know each other well and see each other often.  That’s what many of them had to say when asked if the picnic was a chance to see friends they wouldn’t normally get together with frequently. “No — we do a lot together” was the answer of choice, but still, all agreed that this annual picnic, held at Mayor’s Park, was a special and much-appreciated event.
The picnic, which was organized and hosted by the Cold Spring Village 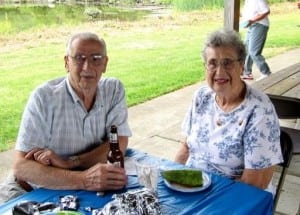 Jim and Ruth (on a first name only basis) look forward to this event every year.

Board of Trustees, spearheaded by Bruce Campbell in particular, and Mayor Seth Gallagher, is an annual late summer event honoring the older residents of this village.  This year Mother Nature cooperated as a light breeze and mild temperatures made for very comfortable not too warm, not too cold conditions. A buffet table was laden with all the fixin’s: burgers, hotdogs, a  variety of salads, and cheesecake.  A sound system played light jazz and swing tunes, the music put together by former trustee John Teagle.
Everyone had praise for the event.  John Falloon said “Everything was wonderful.  The food was excellent, the service good, the entertainment was good.  It gets better every year.”  Jim and Ruth (they preferred to go by their first names — see their photo) said enthusiastically “It’s wonderful of the town to do this for the seniors.  All of us enjoy it very much and are appreciative—we look forward to this every year.”
Many members of the Highland Garden Club were in attendance, including Sally Donoghue and Marilyn Schlosser.  Noting that many older residents participate in the Philipstown Seniors’ day and overnight trips, and some attend the Cedar Street Senior Center meals and activities, Schlosser 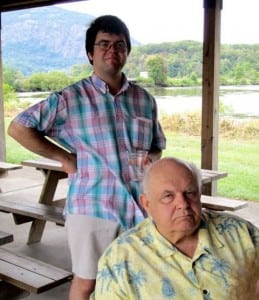 said that “we all know each other, either by name or by face.” Surely one of the wonderful things about living in a small town.
Trustee Chuck Hustis was “glad we have this event.  The seniors work hard enough in their lives—they deserve this.  This is a good tradition, and we should keep doing it every year.”  In the spirit of the day he added “Mayor Seth Gallagher is a wonderful chef and he cooks very good hamburgers and hot dogs!”
Contributions for the picnic were received from many local businesses, including Cathryn’s Tuscan Grill, Cold Spring Cafe, Cold Spring Pizza, Cup-O-Cino, D.P. Mart, Foodtown, Hudson House, McGuires, Pali’s Lunch Box, Pete’s Hometown Deli, Riverview Restaurant, Silver Spoon Restaurant, The Cold Spring Depot Restaurant, The Main Course, Whistling Willie’s and Yannitelli’s Liquor.
The table with the largest (and loudest!) contingent was, upon closer 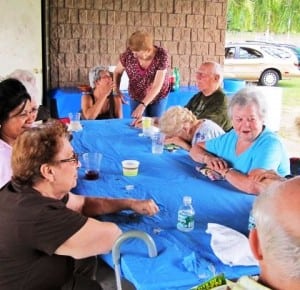 The Left/Right/Center dice game table was a hotbed of activity!

inspection, the “gaming” table.  The game of choice was called  ‘Left, Right and Center’ and, amidst the whoops of excitement, the rules were explained as follows: “you roll the three dice, and however many come up with an “L”

you pass that many nickels to your left, or with an “R” to your right, or [with a symbol], you don’t have to pass any money to anyone.”  Some large stashes of nickels were being guarded and expanded upon with eagle eyes.  No heavy losses were reported. It should be noted that the folks at this table were “the stayers” and were the last to clear out. 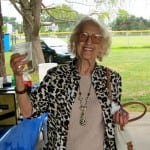 Gloria Larese was a happy picnic-goer.

Towards the end of the afternoon Gloria Larese was heading off with a big smile on her face and a container of pasta salad to enjoy at home, having had a great time. Tony Kurdziel pronounced the picnic “really fabulous.”  Milton Hustis said “a lot of the seniors don’t get a chance to do much, so this is a good thing for them.”

As Mayor Gallagher and the trustees cleaned 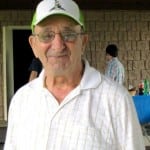 up afterwards, one lone helper remained: Joe Etta, who last November, at age 91, received the French Jubilee of Liberty medal, honored for his role in the D-Day Allied invasion at Normandy in 1944, in a ceremony at the Cold Spring waterfront.  After participating in three beach landings: at North Africa, Sicily, and then Normandy, it goes without saying that folding, carrying and moving multiple chairs was a piece of cake for him, and it’s an educated guess that Joe will be back doing more of the same at Seniors’ Picnics in years to come.