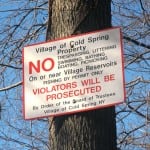 They’ve stood since the West Point Foundry originally constructed them in the 19th century and have been an integral part of the Cold Spring water system since at least the 1920s. Now the village’s Upper and Lower Dams, located off Foundry Pond Road in North Highlands, and their partner, the Foundry Brook Dam on Fishkill Road, are the subject of an Emergency Action Plan (EAP) awaiting attention by the Village Board.
Although officially signed by a project engineer, the document remains a draft in the sense that the Village Board could request changes when it discusses the report, possibly next week. Outlining steps to take to avoid emergencies as well as what to do if one occurs, the 47-page document was written to comply with state requirements.  Prepared by a consulting firm, Tectonic of Mountainville, N.Y., the report covers everything from advice on sandbags — arrange ahead of time to obtain sacks and the personnel to fill them  in case of a flood — to detailed engineering diagrams and maps.
The EAP constitutes one component of a three-part Capital Management Plan, proposed by the Village Board last autumn, to “develop a better understanding for budgeting costs 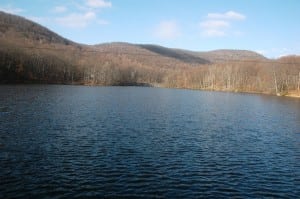 The Lower Reservoir, sometimes called the Middle Reservoir, looking toward the Upper Dam. (All photos by Liz Schevtchuk Armstrong)

for annual maintenance requirements and major maintenance and repairs liabilities for the long term.” The other two pieces include an Inspection and Maintenance Plan and mapping for a Source-Water Protection Plan. In January, the village hired Tectonic to handle all three components for $47,460.
According to its stated purpose, the EAP seeks “to establish procedures necessary to protect life and property in areas affected by the failure of Upper or Lower Cold Spring Dams or Foundry Brook Dam or the uncontrolled release of impounded water from any of these dams” and “serves as a mechanism to provide warning during non-failure but unusual conditions, such as high water events.” It identifies “a routine monitoring system which can activate the plan,” lists officials and agencies involved in implementing the plan, and names the North Highlands Fire Department, on Fishkill Road near Route 9, as the emergency operation center.
Cold Spring’s water system relies on three reservoirs, Foundry Brook, and the dams. One dam, the Upper Dam, divides the Upper Reservoir from its twin, the Lower Reservoir (sometimes called the Middle Reservoir); each reservoir covers about 9 acres. A second dam, the Lower Dam (or Middle Dam, in local parlance) borders the Lower Reservoir and allows water to flow into Foundry Brook, which courses on to Foundry Brook Dam and its reservoir, located at the water treatment plant, beyond Nelsonville. The Cold Spring Water Department, led by Superintendent Greg Phillips, oversees the reservoirs and dams.
The safety of the Upper and Lower/Middle dams has caused concern for at least two years. In May 2008, John Stawski, a N.Y. State Department of Environmental Conservation (DEC) environmental engineer, wrote to the village about cracks and seepage in both. In 2008, the DEC assigned threats associated with the Upper and Lower Dams a Code C hazard ranking — for “high.” Anything in regard to the Foundry Brook Dam, though, got a Code A hazard classification, for “low.” DEC charts in the New York State Inventory of Dams simply name the Upper and Lower Dams, give their state identification numbers, and give the designation of “Hazard Code: C” after each. According to Water Superintendent Phillips, the hazard level does not refer to the dam structures themselves but to potential problems downstream should trouble occur. As he explained Sept. 2, “the classification for dams relates to downstream exposure, not the actual condition of the dam at inspection. The Upper/Lower dams could be pristine and would still garner a `C’ rating, due to properties, roadways, etc., downstream.”
According to the EAP, should a dam fail or flooding occur from other causes, sites that could be affected include land, roads and structures from North Highlands to Main Street.  The EAP lists three categories of threatening conditions:

To deal with such threats, the EAP outlines the responsibilities of various agencies and authorities. For example, in the case of an emergency, it says the Cold Spring Police Department, assisted by the Cold Spring Fire Company, should warn the public, establish reception centers to shelter residents evacuated from danger areas, control the access to evacuated areas, and conduct “rescue and recovery operations as needed.”