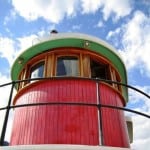 Alas, the winds were at war with the waters and the planned Saturday tugboat sails about the historic vessel Pegasus were canceled by orders from the captain, keeping Philipstown.info and the 35 or so others who had made reservations, from experiencing the Hudson from the vantage point of a tug.
The flip side of this, according to a Pegasus volunteer, was that many 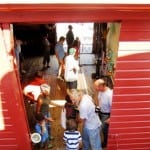 Disembarking from tug to barge

more people were able to climb aboard and explore this venerable craft.  Indeed, there appeared to be a continuous flow of people embarking at the Cold Spring waterfront, making their way first onto the historic Lehigh Valley #79 barge and then crossing the plank onto the Pegasus.
Pegasus volunteers urged visitors to peer into all of the portholes which punctuated both sides of the vessel, and it was fascinating to gaze in at the wood-paneled living quarters and the kitchen area, all filled with evidence of the crew living aboard the boat, including a notably un-historic box of Honey Nut Cheerios, some seltzer bottles, and a bowl placed on the floor, for an unseen dog or cat! The upper level was accessible via a narrow, low-roofed set of steps, and the stern was a welcoming spot to sit and take in the 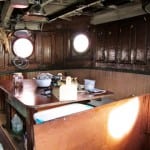 beauty of this part of the Hudson.
According to the Tug Pegasus web site, the vessel began life as one of a series of four sister tugs designed to serve waterside refineries and terminals of Standard Oil, docking ships, moving lighter barges of petroleum products, and serving as auxiliary fireboats when needed. She then served as a transport vessel in Norfolk, Va. She was brought back to N.Y., to engage in general harbor towing, towing of oil barges, contractors’ rigs and railroad car-floats, and transport work. She was retired in 1997, at 90 years old, when preservation efforts began.
The Lehigh Valley #79 barge, was built in 1914 and is, according to a video shown on board, no longer in use because of changes in shipping and the increased use of container ships. It is now home to a ‘Water Front Museum’ with memorabilia, a large Rube Goldberg-like contraption, and maritime-themed paintings on display. 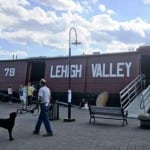 Both vessels are listed on the National Register of Historic Places, and are traveling the Hudson this fall. Their Web site explains that they are being used as “educational platforms, teaching New Yorkers about their ports and rivers as natural, cultural, and commercial resources. Programs onboard promote public access and awareness of our historic and current maritime industry, which is vital to our economic and ecological sustainability.”
On Sunday the Pegasus sailed down to lower Manhattan, on a five-hour journey, and on Sunday evening the Lehigh Valley #79 played host to what Cold Spring Mayor Seth Gallagher dubbed a “hugely successful” contra dance.  The barge was open to visitors again on Labor Day Monday, bringing “Tug and Barge Weekend” in Cold Spring to a conclusion. [slide]