Public meetings don’t often captivate an audience’s undivided attention but last week’s gathering to discuss the draft version of Cold Spring’s new Comprehensive Plan was the exception. Residents peppered the Special Board charged with drafting the plan with non-stop questions and comments. It was a lively warm up for the more formal public hearing on the plan scheduled for Thursday, Oct. 14 at 7:30 p.m. at the Fire Station on Main Street.
Commentary ran the gamut — from consolidating services, controlling taxes and traffic concerns to traffic, parking, cost of projects and the desirability of family residential development. Mike Armstrong, Chairperson of the Special Board fielded most of the public’s questions. Consolidating local government services has been hailed as a way to save tax payers’ money but James Hartford doesn’t agree — not when it comes to code enforcement.  Hartford, a local architect and former Cold Spring building inspector said “If we consolidate code enforcement we lose control over village needs. It’s important that we strengthen that position – consolidating would actually cost us money. The building inspector currently more than pays for himself.”
Special Board member Anthony Phillips expressed concern that comments on the Comprehensive Plan be limited to village residents. “How will written comments be evaluated so we know they aren’t from Beacon or Poughkeepsie?” he asked. Armstrong said that all written submissions become part of the public record and must include name, address, phone number and email address. 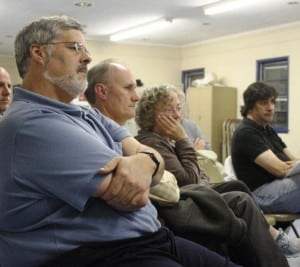 Bob Leonard is concerned about extension of Lunn Terrace

As always, traffic and parking were on people’s minds. Bob Leonard lives on Constitution Drive and is leery about a plan to extend Lunn Terrace to create a through street. He thinks that would “”¦mean more traffic, and more Metro North parking. We don’t want it to be like Beacon where you can’t even get onto Route 9D. It’s building up as it is with a dead end there.” Dick Turner proposed using “the old mine road” from Chestnut Ridge as an alternate traffic route but Anthony Phillips said that the lane, built by the EPA during the Marathon cleanup, could never be suitable as a public road. Armstrong said that because streets in that section of the village, including Furnace, Rock and Kemble, are so tight that that any change in street layout would need to include ” very careful analysis of traffic in the morning, evening and on weekends.”
Arnie Saari questioned whether charging for Main Street parking was simply another tax on local residents. Armstrong replied that about half of the ninety-nine Main Street parking spaces are used by business owners and their employees. He said metering would ensure turnover of parking spaces and that the right fee structure would result in a desirable vacancy rate of one space in seven. “We think most parking fees would be paid by visitors” he said. One scenario calls for lower rates during the week — a move that would benefit residents.
Saari also questioned how the village could afford many of the projects being put forward in the plan. “There area lot of big ticket items — the road from Lunn Terrace, the looped trail, possible bridges. Where will the money come from?” Armstrong was emphatic that funding, “won’t be from property taxes. It would have to be from grants. He said that if ideas are in place, then grant funding is possible later, but that ” if you don’t have ideas you’ll never get things done.”
Hartford supported Armstrong with an example from Poughkeepsie stating that Mid Hudson Business Magazine had recently referred to the Walkway Across the Hudson as “the economic driver of the Hudson Valley.” The walkway is a former railway bridge that now serves as a pedestrian walkway that attracts many visitors. “They took a piece of infrastructure and made it into an asset. You have to set goals and have ideas to pursue” Hartford said. 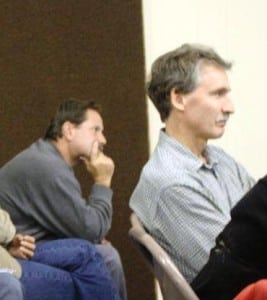 Peter Henderson questioned if enough time was being given for residents to comment on the plan. “To what extent do you expect to be able to make revisions based on comments? You’ve given yourself only one week” he said. Armstrong explained that the public hearing that begins on October 14 will remain open until October 21 with residents able to comment up until then. That didn’t totally satisfy Henderson. “I’ve been involved. I see things missing or interpreted differently (in the draft plan). I want to ensure that my comments are considered.” Armstrong held his ground. “I think it’s doable. My experience has been that if you allow a lot of time you get a lot of silence. When there are deadlines people make comments.”
“I’ll be submitting lengthy comments” Henderson said.
The cost of schools was also discussed. Saari noted that “the biggest single impact on property taxes is noticeably absent” from the draft plan — and he urged the Special Board to include a goal to actually reduce property taxes stating that “young people and seniors are hurt most by high taxes.” Armstrong said that the plan does not address school taxes directly because Haldane and Garrison School Boards are the agencies that control the cost of schools, not the Village of Cold Spring. Special Board  member Marshal Mermell added that during the planning process the high cost of schools was discussed but that it is “an issue that must be addressed at the state level.” Saari persisted saying that “to remain silent implies acceptance. There is such unhappiness with big government — it would be good to have a goal” (that addresses the cost of education.) 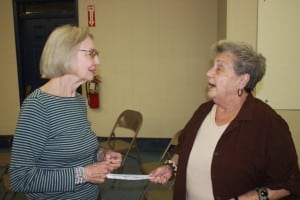 When Special Board vice chairperson Anne Impellizzeri commented that open space, commercial and light industrial are the most economically desirable forms of land use  — and not family residential – it sparked an emotional discussion. Phillips said “I don’t think Anne meant that. I’ve seen an influx of young families and I love it!”
Rhoda Needleman agreed with Philips. “How many of us will be here in twenty years?” she asked. “We’re lucky we have young families coming in. We have to plan for our children’s future. They are the future of Cold Spring.”
“That’s the debate” Hartford said. “We want to be welcoming to families — but not overwhelmed.”
The complete draft Comprehensive Plan can be viewed by clicking on here.