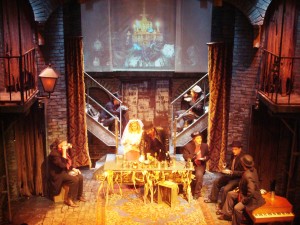 In spite of its relatively small size, the Depot Theatre has a miraculous ability to transform itself into the various locales, both real and imaginary, of the plays it presents. The current production of the Three Penny Opera is no exception, as one walks into a subterranean world inhabited by thieves and whores. The only “honest” businessman is Mr. Peachum who, with his wife, outfits all the beggars of London. His only desire, aside from wringing the maximum profit from his network of beggars, is to see his daughter Polly married into a station that will allow her to care for him in his later years. Of course, Polly marries for love and thereby hangs a tale.
Based on John Gay’s Beggar’s Opera, the Brecht’s The Three Penny Opera tells the story of Polly’s marriage to the notorious MacHeath: murderer, philanderer and all-around scoundrel who controls the thieves of London as Mr. Peachum controls its beggars. Under the aegis of Tiger Brown, the chief of police and Mackie’s army buddy, MacHeath is seemingly untouchable until Mr. Peachum discovers his daughter’s marriage. Using cunning, 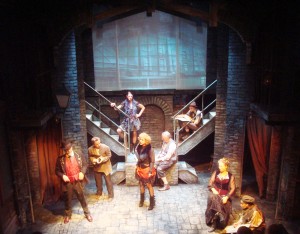 bribery and deceit, Mr. Peachum pursues MacHeath to the gallows where, after one escape and recapture, it appears that ‘Mackie’ has literally reached the end of his rope. Despite the dreary world presented over the course of the opera, where all man’s efforts turn to naught, Tiger Brown arrives with a reprieve from the Queen, not only saving Mackie’s neck, but also providing a sizeable annual income and a “happy ending.”
The ensemble cast, some playing multiple roles brings the story to life under the umbrella of Chris Novack’s environmental set, which merges seamlessly into the action. Almost a character itself, the set looms over all that happens and prevents anyone’s escape. Director Abigail Zealy Bess’s direction emphasizes the rats-in-a-maze existence of the characters by having them swarm over the set: popping in and out in various places at various times. Among the denizens of London’s 19th century underbelly is Sterling Swann, whose alternately smarmy and cut-throat portrayal of MacHeath makes it clear that “although his knife is kept out of sight,” he is not shy about using it. Bringing their characters to life via song are Maia Guest (Polly Peachum,) Jenn Lee (Jenny,) and Julie Heckert (Lucy Brown.) As his wife and the whores who betray him, their singing melds with Kurt Weill’s memorable score to portray not only their characters but the hypocrisy and resignation-to-their-fates of all thieves and beggars. 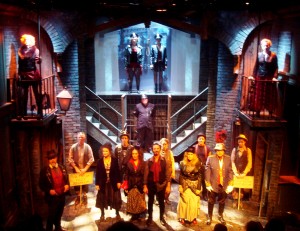 Performances of The Three Penny Opera continue at the Depot Theater on Nov. 5-7 and 12-14. Friday and Saturday performances begin at 8 p.m. and Sunday matinees at 2 p.m. Tickets and further information may be found at www.philipstowndepottheatre.org or by calling (845) 424-3900.

2 thoughts on “Three Penny Opera at The Depot Theatre”