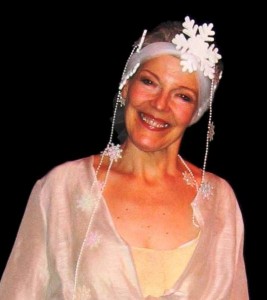 With Art, That’s How

Cultivation, drought, roots, water, weeds, flowering.  Using conventional garden imagery as a symbol for life’s journey or the human condition or any of the other big picture topics would be too facile for the writers who participate in the twice-yearly “performing literary magazine” known as the Art Garden. No, these writers would more likely take an off-kilter approach: circuitous, sly, rueful, confessional maybe, but never obvious and always affirmative.

Last Saturday, Nov. 28, the 50th edition of Art Garden was unearthed at the Depot Theatre, its home for most of its 23 years (the first two years saw four editions; the June and November format was adopted by the third season.)  When writer and actress Irene O’ Garden (more on that strange garden coincidence later) conceived of this Garden of Writerly Delights over two decades ago, she recognized that writers needed three things: “A subject, a deadline and an audience.  By doing this and making it a performance, it gives writers what they need.  Now we have people who have 50 pieces of writing.” O’Garden has produced, hosted and written for Art Garden ever since.

Each Art Garden has a theme, a broad one, open to an array of interpretations.  Saturday’ was “Gold,” and the press release alone alluded to the possible literary routes one could take: “Whether it’s a wedding band, a medal for achievement, or a star on a child’s composition, gold is more than glittery spill of pirate’s chest or a shopping channel – it’;s a symbol of what is precious to us.”  Previous themes have included Chairs, Animals, Shadows, Money, Neighbors, Magic, Snow and Birth (“that was an interesting one,” says O’Garden).

In its earliest years Art Garden took place at the Garrison Art Center, with folding chairs set up in the Drawing Room.  O’Garden remembers getting the first set of lights “for the sense of theater.” From early on, O’ Garden wanted the Art Garden to be “a safe place.  It is scary to read, but our audiences are warm and loving.”  It remains, O’ Garden says, “essentially an affirmative evening.  It was not an idle choice to use garden as a symbol. The triumph of growth comes from learning to balance with bugs and fungus.  Where you leave people is important.  I’m always a fan of leaving people in an affirmative place.  The spirit of Art Garden is not about writers going into dark places and leaving us there.  Many pieces are poignant, but there are always a lot of laughs as well.” 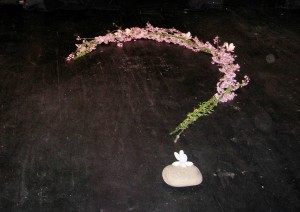 There were a few bumps along the Garden path in the beginning.  O’ Garden relates, “We tried it outdoors, at Garrison’s Landing.  Disaster – you couldn’t hear a thing.  I didn’t pre-read in the beginning, and didn’t set time limits.  We had a 20-minute piece that no one could hear.  If you want to cultivate writers you have to make an effort to cultivate an audience. If you want to get people to come listen, you have to give them quality.”  Nowadays, pieces run closer to five minutes, and can take any number of forms: guitar-accompanied songs, poems, essays, monologues, dance pieces.  Aside from time limits, the only other stipulation is that each writer must attend an Art Garden first as an audience member, to get the feel of it, before presenting work.

Many of the writer/performers are regulars; some have not missed an Art Garden since its inception.  Generally about 15 to 17 perform at each edition, all personally invited, some referred by those who have performed before. The authors range in age and experience, according to O’ Garden: “We’ve had children; our youngest was a nine-year-old girl. The oldest was an 89-year-old man who had never written a poem.  He started writing for us – and died six years later.  A collection of his poetry was printed independently.”

Four volumes of The Art Garden Vista, a hand-colored, limited-edition anthology of the best Art Garden writings were produced by O’ Garden together with Tracy Strong and Cecile Lindstedt a number of years ago, and a few copies remain on sale at the Garrison Art Center.

O’ Garden, a Garrison-based playwright, poet and children’s author, has worn many writing hats.  Her latest play, Little Heart won her a Berilla Kerr Playwriting Fellowship and was awarded full development at the New Harmony Play Project.  A previous play, Women On Fire, was produced – and twice extended – Off Broadway. O’ Garden’s poetry has been included in many literary journals and anthologies. She teaches poetry workshops in city schools and is currently bringing the national River Of Words program to Hudson Valley schools under the auspices of the Hudson Highlands Land Trust. O’ Garden received the 2009 Alice Curtis Desmond Award for her work in children’s literature. Her new book, Forest, What Would You Like? will be published soon. 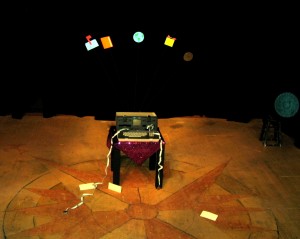 And that strange Art Garden/Irene O’ Garden coincidence?  No, she did not take inspiration from her own name in naming the program.  Quite the reverse.  Perhaps if Art Garden ever chooses the theme “Names,” this tale could be included. Three years into Art Garden’s existence, “as a lark,” the then Irene O’ Brien put herself down in the program as Irene O’ Garden. “I looked at it and thought, ‘What if?’  Who is this O’ Brien/of Brien anyway? Bloody Irish warrior. I fit in more with garden.” The idea took seed, so to speak, but the $267 fee for changing one’s name legally was a deterrent.  While mulling it over, out of the blue, a refund check for something or other arrived, in the amount of $270.  Presto! A name change was born, and, in 1991, Irene O’a Brien became Irene O’ Garden legally and fittingly.

Writers, get your pens ready: the next Art Garden will take place in June.

The Gold Art Garden began with an opening meditation.  As the audience members closed their eyes, Giom Grech drew them into the spell of a tale of an old piece of furniture, a drawer unable to be pried open, finally yielding its riches: a gold bracelet watch.  The spell was set.

The other readers and performers invoked gold in all forms: the shimmer of golden cymbals; a goldfinch; that burst of light as the eclipse ends; the “ancient transactions” of gold seller and buyer, golden rules for mice; how wearing gold “calls for too much responsibility;” the golden anniversary celebration of much-loved parents; and a wry riff on the golden years from Steve Lindstedt, which turned a number of Beatles song titles and lyrics into commentaries on the glories and indignities of those of a certain age, and asked the eternal, probing question: “Which will go first, the knees or the noodle?”

Poet Jo Pitkin, a returning reader, said that it was “fun to watch your neighbors and acquaintances perform their work and listen to them – to see them in a better guise. I enjoy it whether I’m a participant or a listener.”

Frank Ortega, poet and essayist, and a veteran of many Art Gardens, had his thoughts: “What’s interesting is the challenge of writing something new in a short period of time, knowing it will be performed live for an audience.  Also, it’s ephemeral; everything comes together then whoosh —  fireworks — that’s it.”