Citing a “vast improvement” in the state of village finances, auditors this past week presented the Cold Spring Village Board with analysis of data for fiscal 2009-10, which ended May 31. In remarks to the mayor and trustees on Dec. 14, James F. Letterio of Sedore Hudson Valley CPAs, a Poughkeepsie firm, said that the condition of the village’s general fund “certainly has turned around a lot. It’s a vast improvement. You’re certainly moving in the right direction.” The situation marks a turn-around from a few years ago. A New York State Comptrollers Report for the period from June 1, 2005, through Sept. 30, 2008, noted that the general fund ran deficits of approximately $37,276 in fiscal 2005-06, $127,286 in 2006-07, and $95,895 in 2007-08.

Letterio provided a 50-page report, consisting of a “management discussion and analysis” and three financial sections. Despite its thicket of details, Sedore labeled the material a “draft” to allow for minor updates and revisions as the firm went over it with village officials. According to the data, Cold Spring ended fiscal 2009-10 on May 31 with total assets of $3,247,924 and total liabilities of $2,678,895, leaving it with total net assets of $569,029. To prepare the document, the auditors scrutinized village financial information, incorporated into the overall report.

Cold Spring maintains three basic funds for ongoing activities:  the general fund, which covers most central government functions, and the sewer and water funds. As of May 31, according to the draft audit report, the village general fund contained a balance of $123,735; the water fund balance was $745,568 and the sewer fund balance was $251,933. The village’s fiscal 2008-09 ended with a general fund deficit of $473. The auditors’ draft report stated that the general fund balance “increased approximately $124,000 from 2009 to 2010″ as a “result of  a reduction in expenditures in the amount of approximately $139,000, primarily in salaries and employee benefits and other expenses, such as automobile repairs, gasoline, diesel, heating oil, and professional services.” The report noted however, that “these decreases in expenditures were offset by a reduction in revenue of approximately $40,000, resulting from lower property mortgage taxes, offset by an increase in consolidated highway aid.” 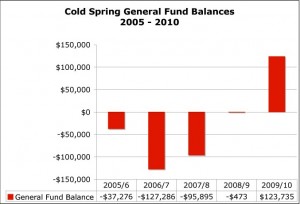 The draft audit report also said that “in an effort to eliminate the general fund deficit, the village has put into place policies and procedures to better track the village’s revenue and expenses, including the periodic review of actual-versus-budget. In addition, the village has added new budget lines to better track expenses and has more interaction with the department heads.” To prevent problems and keep on top of needs, “we’re adjusting the budget even on a weekly basis,” Mayor Seth Gallagher explained during the audit session.

The draft audit report states that during the 2009-10 year, the general fund took in $1,768,042 from basic sources – taxes, state aid, fines, departmental income, permits, and similar sources and spent $1,665,046 on public safety, health, recreation, other public services, government operations, employee benefits, and similar needs, for a preliminary balance of $102,996. Another $21,212 from operating transfers brought the balance to $124,208, which, after accounting for the previous year’s deficit of $473, brought the ending balance to $123,735.

Letterio presented the draft audit to the mayor and Trustees Bruce Campbell, J. Ralph Falloon, Charles Hustis, and Airinhos Serradas on Tuesday prior to the board’s regular meeting. After the audit discussion, the board continued to focus on finances, using a large part of its regular meeting to go over the six-month review of fiscal 2010-11 finances. The draft audit report covered Mayor Gallagher’s first year on the job, whose responsibilities include serving as budget officer. Initially a trustee, he took over as mayor in April 2009, following an election in which he defeated incumbent Mayor Anthony Phillips. The last stage of Phillips’ long tenure coincided with some of Cold Spring’s budget woes.

The New York State comptroller’s report on the problems of 2005-08 declared that “the village’s deteriorating financial condition was mainly caused by over-expended budget appropriations, inaccurate accounting records, and unrealistic budget estimates. Village management also did not ensure that expenditures were within adopted budgets.” Even before the end of the period covered by the comptroller’s report, though, the village government began making changes. The then-treasurer departed and the village began employing a certified public accountant part-time while naming Mary Saari official treasurer as well as clerk. As of 2009-10, “the numbers looked pretty good for the year,”Letterio told the Village Board. The problems of previous years “were cleared up, and there were no new issues.”