It should be a true hometown crowd on stage and off when Drew Scecina takes to the stage at the Depot Theatre next Saturday night for a Music Tracks evening of “singing and strumming—and some drums.” Scecina, one of those triple threat musician types, plays guitar, drums, composes and sings.  He’ll be on stage for the duration of the concert, joined by many friends and fellow musicians, including Steve Siktberg on electric guitar, Nino Piccone on drums, Steven Mihalik on acoustic guitar, Brian Fornabaio, also on acoustic guitar, and Scecina’s uncle, Haldane teacher and local music fixture Mike Klubnick, on bass.
Scecina, who places himself in the folk-rock genre, is not currently in a set band, also he has “dabbled in a couple of groups” in years past.  Truly a local “product” — he grew up in Philipstown and is the son of Andy Scecina and Patty Scecina Klubnick, he credits Haldane music teacher, band and jazz band director Deb Contini with “helping me with music theory, and also with being part of a larger whole.” Scecina attended Haldane for all 13 years, graduating in 2001, and has been playing the drums since junior high.
For the past few years, Scecina has been playing his music at clubs all over the region, throughout Dutchess County, at places including Max’s in Beacon, and in musical hot spots here such as The Depot Restaurant, Whistling Willies and the Silver Spoon.  He got his first taste of performing back during the high school years, gigging with the Klubnick-run Blues Devils, the rock/blues group based at Haldane.  Back in the day, says Scecina, “my uncle was almost fighting for people to join.  Now it’s really popular. I got a real taste of performing through that group.”  Scecina still supports the group by sometimes attending their performances at Whistling Willie’s Open Mic Kids’ Nights.
Although Scecina says that, “from my perspective there’s been a fairly steady flow of bands playing in clubs and bars,” the economy has taken its toll on local music, as “the owners are less willing to give proper compensation because they just don’t have it.”  Money isn’t what drives his music though, “It’s exposure, fun, passion, as opposed to making a few bucks.” Asked what inspires his songwriting, Scecina reflects, “It’s got to 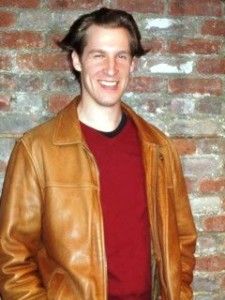 come from some sort of experience “¦ to come up with something creative.  It’s definitely really personal.  It depends—sometimes the lyrics come first and then I find the chords to put behind them, but it can go either way, sometimes a chord progression I’ve fallen for starts it off.  I also enjoy collaborating with others — a group effort.”
Scecina is looking at this performance as kind of the foundation for his musical future.  He is thinking of returning to school, to get his masters in elementary education, but the music will continue.  He says  “A decision such as this one to play in a fresh kind of setting—it’s a positive push for me to continue with it. I see this concert as a nice way to expose myself as a folk/rock guitar player.  I’ll be playing throughout, and others will be joining me for a few songs each, in a ‘Drew and friends’ theme, and there’ll be some surprise guests.  I’ll be performing a handful of originals for the first time.  I’m expecting a good bunch of my old pals to turn up.”
Asked who he is inspired by, musically, Scecina’s first thoughts go to the past, “I revert to what I grew up listening to: Warren Zevon, The Beatles, Jackson Browne, Bruce Springsteen.  I also listen to newer music: Dave Matthews, John Mayer, Radiohead.” For a taste of Scecina’s music, click Hear Me (Drew) 102609.
“Drew Scecina and Friends” will appear on Saturday, Jan. 22 at 7 p.m. at the Depot Theatre at Garrison’s Landing.  Tickets are $15 and reservations are suggested. For more information visit http://www.philipstowndepottheatre.org/ and for reservations, call 845-424-3900.