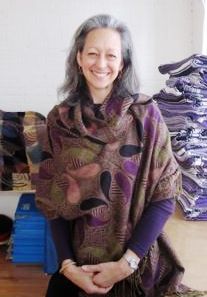 Suzi Tortora’s practice, which encompasses therapy, dance classes and much more, is called ‘Dancing Dialogue.’  It is indeed a dialogue, of words and movement, intellect and emotion, conscious and sub-conscious, which threads its way through the varied classes and workshops she conducts at her Marion Avenue space in Cold Spring. Known to many local parents as the home of gentle, let it flow, creative dance classes for young children, as well as therapeutic dance movement therapy and social skills navigation classes for slightly older children, Tortora also conducts programs for adults who are seeking to reach within and use the combination of a creative process and meditation to come to a deeper understanding of self.
On a recent Saturday, Tortora conducted an Authentic Movement workshop in her inviting studio, lined with colorful scarves and hoops used in her children’s classes. Authentic Movement, also known as Movement Meditation, had its beginnings in the mid-1950s when the woman who first developed it, Mary Starks Whitehouse, combined her interest in Jungian concepts of ‘active imagination’ with her background as a dancer—in particular with modern dance movement improvisation. As Tortora describes it, Whitehouse “got very interested in the content of dance.” The practice drew from its double roots in psychology and in dance, along with mindfulness and meditation; it emphasizes, above all, “compassionate communication.” Authentic Movement is an independent discipline, but is also incorporated into other practices.
There is a mutable structure to Authentic Movement workshops, and the facilitator is able to use the overall template but adjust the timings and the order as suits the individual group.  In Tortora’s group, the ten participants, virtually all of whom had participated in previous workshops, began the session with some activities acknowledging and honoring the space and each other.  Then, guided by the gentle gongs of a bell, participants paired off into groups of two, each pair consisting of a “Mover” and a “Witness.”  All in silence, the five witnesses took spots around the room, while the movers were free to enter into the circular area within, and, with eyes closed or barely open, to let their bodies follow innate impulses, whatever they might be, for a fixed period of time.  Some movers were more inwardly-directed, others had bigger, broader movements either in place or in any part of the circle.  The witnesses trained their eyes on their specific partner, and focused on their partner’s actions and also how these movements and the aura of their partner influenced their (the witnesses) perceptions, taking care to avoid projection of their own impressions onto the interpretation of the mover.  After the movers “time” was up, both movers and witnesses were able to record, either with words, through journaling or through art, their feelings about the movement which had just taken place.
The movers and witnesses then switched off, and the watcher became the watched.  This alternating structure was repeated again, and was followed by a meeting time for the pairs, to go over reactions both to self and partner and compare notes, so to speak. Other, more group-oriented movements and reflections followed, and the four-hour program ended with a closing gesture and some dance. All of the participants appeared to be absorbed, in a positive way, with their experience on the day. 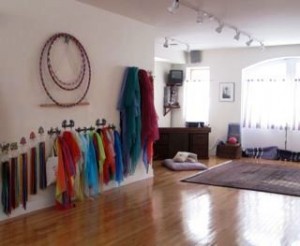 Tortora’s notes for the workshop describe Authentic Movement as “a type of meditation that occurs by closing your eyes and listening to your body—as you listen to your body with this inward focus, you will find a natural state—through an unfolding process that can be active, taking you through the room, or deeply internal, where you may not be moving in any perceivable way to your outside observer “¦ the witness never assumes s/he knows what your experience is for you, but rather explains the images and sensations that have come up for her or him.  As you listen, you attend to your reactions, to see if any of these images resonate with your experience.” The website http://www.authenticmovementcommunity.org/ describes the process as “[it] cultivates a contemplative frame of mind, clarity of perception, and movement that is personally enhancing.”
Suzi Tortora has been practicing Authentic Movement for over 25 years.  She learned it from Janet Adler, who was a protí©gí© of Mary Whitehouse, being first a patient and then a student.  Adler studied and applied Authentic Movement initially as a therapy, and then as a practice, and Tortora’s sessions are similarly non-therapeutic, serving instead a “personal discovery” for those who partake of it. Tortora sees Authentic Movement as “a free association, but we allow our bodies to move us, rather than our minds.”
The participants in Saturday’s workshop were male and female and ranged in age across decades.  Some had worked with Tortora before, and others have done Authentic Movement in a different setting and with different guides. “Our bodies tell stories,” says Tortora.  “Our bodies are maps of everything that’s ever happened to us.  The more you listen, the more you tune out the chatter, the more you discover about yourself.  Shut off the thinking self and go into the kinesthetic self.”  Tortora herself has been a participant in Authentic Movement retreats, some lasting as long as “10 or 12 days, where you go deeper and deeper into the process, spending several days in a row just moving and journaling, getting in touch with self in a mind-body way, creative and expansive.”
Asked how other dance therapy practitioners view Authentic Movement, Tortora, also a dance/movement psychotherapist replied, “most people treasure it.”  Tortora received her degree in child development, education and psychology from Tufts University; her dance movement therapy masters degree at New York University; and her doctorate with a specialization in infancy/early childhood development, psychology and education from Teachers College, Columbia University.  She has lived in Philipstown since 1986. In addition to all of her work in Cold Spring, she is the senior dance therapist at Memorial Sloan-Kettering Cancer Center in New York City, and has recently participated in a long-term program working with about 50 of the 105 women who were pregnant and became widowed on September 11th, nearly ten years ago. Tortora is part of a team of seven working to understand attachment issues particular to that situation. She also maintains a private therapy practice in Manhattan. Tortora describes the core of all of her work as “using the creative process to get in touch with self. The medium is body work, creativity and dance.”
Tortora’s website, www.dancingdialogue.com, offers a comprehensive view of the many strands of her career and provides more details on future Authentic Movement workshops and all of the other classes she offers in Cold Spring. She may also be reached at 845-265-1085.