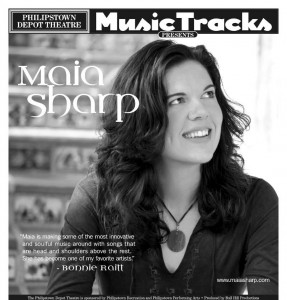 Maia Sharp returns to the Depot Theatre this Thursday night, March 3, almost five years to the day after her first appearance there.  In those five years Sharp’s star has steadily been rising, with a Don Was-produced CD release, an increasing number of notable artists—including Bonnie Raitt—recording her songs, and opening up shows for Raitt among the newest notches on her belt.

Sharp divides her time into separate, but linked, musical activities: touring, writing songs, often with a co-writer, and producing.  Trying “not to think of the economics” of it all, the time tends to fill itself in in six-month stretches, says Sharp. “I’m at my sharpest when I don’t have to bounce around, when I can just do one thing for a little while. It’s best when I can work in waves.” The songwriting and producing work assist in supporting the touring, as the vagaries of the economy have affected the circuit, not in terms of audience turn-out, which is, according to Sharp, still strong, but in the “club confidence “¦ the clubs have definitely been hit [by the economy]. I can still pull the crowds but now it has to be a door [proceeds] deal, not a guarantee.  It’s not as easy to get what you know you’re going to need, and we’re all on the line.”

Sharp is pleased to be returning to the Depot. “I love the theater, love how the seating is laid out; it makes it easy for the audience to truly listen.”  Sharp will be performing a mixture of material from her recent CD, “Echo” and also favorites from earlier CDs, as well as some new, not yet recorded, songs.  Sharp says that lately, her songs have become “more truthful. In my early twenties I was focused on rhythms and rhymes, saying something new or saying something old in a new way.  I would think ‘ooh, I love that line,’ observing friends, and then try to use it.   The songs would start with a line or two that I loved.  But now, sometimes I’m halfway done, with a verse and a chorus, and I realize that it’s not a phrasey twist that I’m going after, it’s a little story that wants to be told.  Maybe it’s because I’m 39 now, and more things have happened!” 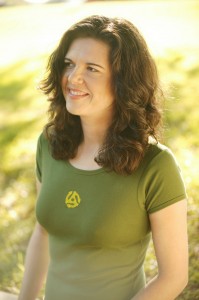 Sharp is also enjoying a new aspect of her career: producing others.  She has just finished producing an Edwin McCain record (“it’s fresh out of the oven”), and the experience has been completely positive. “It’s wonderful to be in the studio and not be the focus.  I just love putting in the whirly parts and the horn lines  “¦ making the choices for takes.”  It’s also a way to earn money and “fill in the gaps—another way to keep at it.”

Familiarity with a production studio is something that comes quite naturally to Sharp.  Her father, Randy Sharp is a songwriter and she can measure her younger years by his studio’s progression from 4-track to 8-track to 16-track and beyond.  “My folks were always singing in rock bands, and I’d be hanging out just offstage.  My father showed me around his studio all the time and hooked me up with mine.  It’s been a huge advantage.  Being able to do a lot myself has given me lots of opportunities.” Based in Los Angeles, Sharp makes regular trips to such music centers as Nashville and Austin.  The variety of her songwriting has lent itself to the wide spectrum of recording artists, from different genres, who have recorded her work.  A sampling includes Raitt, Carole King, the Dixie Chicks, Art Garfunkel, Keb’ Mo’, Cher, Lisa Loeb, Terri Clark, and Trisha Yearwood, Mindy Smith, Paul Carrack, Kathy Mattea and David Wilcox.

Along with writing independently and co-writing, Sharp has honed her songwriting chops at workshops such as one organized by her producer, Don Was.  For a web project entitled “My Damn Channel,” participants had a limited amount of hours each day to create two songs from scratch and have them on the air that evening. Calling it “completely scary,” Sharp has used the “scary” to her advantage: “I think hey, I was put together with Carole King.  We shook hands and wrote a song within three hours.  It worked and was successful.  If I can survive that, I can survive any scary situation.  The confidence factor that it gave me is priceless.'”

A theme which pervades Sharp’s lyrics is the beauty of imperfection.  A celebration of it, in fact. “My favorite albums are not perfect; there’s no need to sterilize.  My favorite humans are flawed and wacky.”  A portion of her song, “Death by Perfection” amply illustrates this:

But no, they took something beautiful
straightened the curves and they filled in the cracks
’til it was unrecognizable
they shined it, refined it
until they could see their own reflection
death by perfection


Sharp’s publishing company is called “Crooked Crown,” which is also the title of one her songs, one recorded, in fact, by Bonnie Raitt.  It all comes down to that facing your fears type of thing again: Sharp says the lyrics imply  a duality: “I’m wearing this crown, but if I move it, it’s precarious.  If I think about the scary stuff, it’ll fall.”

Sharp’s Depot Theatre performance starts at 7:30 p.m. and tickets at $25 each, can be reserved by calling the box office at 845-424-3900. A special pre theatre dinner is also available at Riverview Restaurant from 5:30 to  7 p.m. and includes an appetizer, entrí©e, dessert and coffee for $25.

The Origins of Music Tracks

Philipstown’s Nancy Montgomery is producing the Maia Sharp concert, and it was Montgomery who brought Sharp to the Depot the first time around as well.  Philipstown.info  asked Montgomery a few questions; the following is an edited version of her emailed reply.

Philipstown.info: How did you first hear of Maia Sharp?
Montgomery: My husband first heard her on WFUV. The song was called “Something Wild.”  It was one of those moments where he just stopped everything and sat in the car to listen. He came home enlightened and told me that I just had to hear her. We spent hours trying to find her online but couldn’t because we kept spelling her name wrong (Maya, instead of Maia). We finally found her and bought “Fine Upstanding Citizen” which stayed in our CD player for about a year and became our daily house music.

Philipstown.info: How important is it for Phiipstown to get national acts here?
Montgomery: I first got involved with The Depot because Dockside had closed down and I no longer had an outlet for booking music. There were a few great local acts that I just needed to put onstage. Dana Edelman was new in town and I was desperate to put him on stage. After a few weeks of hounding Claudio Marzollo to let me produce a show, he suggested that I become a board member and head up The Music Tracks Series. With the design and marketing expertise of Frank Famularo we were able to create a logo, a trademark, a brand for the series that was here to stay.

It was really important for me to help these local musicians play in a theater setting instead of the usual bar setting. What became more evident with each show was that this stage was unique, this community was starving for quality entertainment and I could prove to them that they didn’t have to travel to NYC and pay $50 for a ticket…we could do this right here. It was also a win win for some of the local acts to play on the same stage as the national acts.

When I first heard Maia I thought what the heck, I’m going to find a way to put her on that stage. I had already produced Grammy Nominee Bruce Molsky at the theatre, why not try to bring in more national acts? I was scared to death, I was now dealing with contracts, booking agents and management companies like WMA & Fleming Tamulevich. It was tough to convince these agencies to let their artists play at an unknown 67-seat theatre, but somehow I did it. The hardest thing was to find the money to produce these shows. Ticket sales alone were not going to cover the cost of bringing national acts in. So, I took to the pavement and started knocking on doors for sponsorships.

We’re really fortunate to have a very generous business community in Philipstown. In those early years it was Anthony Yannitelli Inc, Shea Construction, Cathryn’s and Riverview who sponsored individual shows, but there’s only so much you can ask of these family run businesses…who are always willing to support community causes. In the last years that I ran the series I was approached by Skip Morton and Irene McGrath of RBC Wealth Management, it came from the magic that’s made on the Depot Stage, they wanted to sponsor the whole series! With that sponsorship I was able to bring in acts like John Gorka, Tuck & Patti, Red Molly, Bruce Molsky, Jerry O’Sullivan, The Greencards, Liz Caroll and John Doyle…and of course Maia! It became a solid series of national and local acts….and we were officially on the map. The national acts always seemed amazed by our little gem on the Hudson and always want to come back!