The Cold Spring Comprehensive Plan effort inched forward Tuesday night when the Village Board held its public hearing on the 97-page document but voted 5 to 0 to accept written comments for another 30 days — until April 1. In a 75-minute meeting held in the parish hall of St. Mary’s Episcopal Church, the board listened as several of the approximately 30 attendees commented on the plan, often negatively. Some speakers also defended the role in the village of such groups as the Cold Spring Boat Club and village Historic District Review Board, both discussed — like many other places or institutions — in the draft plan.

Representing the Boat Club as commodore, Mark Patinella said that “the main thing we want to impress is the goal of the Boat Club that it’s always had, which is to encourage and foster a community sense in the community and be an asset. And I think we’ve done that through several meetings.” The draft plan tells the village to “work with the Boat Club toward three inter-connected objectives for this village-owned property: protect and enhance the benefit of the Boat Club for its members; increase the benefit of this riverfront site for village residents; and generate revenue for the village.”
“We’d like to continue what we’ve always done” as well as encourage Cold Spring residents to join the club, Patinella added. “We have a launch open to residents free of charge. This is helping our businesses out tremendously.”
Peter Henderson, involved with the Comprehensive Plan working groups, which generated reports, analysis, and suggestions in the pre-writing stage of the Comprehensive Plan, strongly criticized the draft. “Please don’t adopt it,” he told the mayor and trustees. The Special Board for a Comprehensive Plan-Local Waterfront Revitalization Plan (LWRP) gave its draft document to the Village Board in December and the Village Board subsequently went through the text line-by-line, making revisions. But even with those changes, “basically it’s the same plan,” Henderson said. Among other flaws, the document “is too long and it’s torture to read in its current form. That in itself is a major problem,” in addition to being drab, he said, whereas such plans typically are “attractive and easy to read.”  He also faulted the content and the process used to create it, emphasizing the close, 5 to 4 vote by the Special Board to forward the text to the Village Board. “The split on the board probably reflects how the community itself feels,” he said. “I think we do have to do better in terms of reaching consensus. This is supposed to be a shared public vision.” He urged the Village Board to shelve the plan indefinitely and proceed with the twin effort, a Local Waterfront Revitalization Plan. 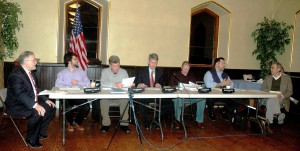 Al Zgolinski, Historic District Review Board chairman, mentioned various recommendations in the plan and hit on “my favorite one — improving the procedures of the Historic District Review Board. I have a problem with that,” he said. “Of all the boards, I think we’re probably the easiest to deal with.” The draft plan states that among residents, “much concern has been expressed about the Historic District Review Board process”; the plan urges the village to “improve [it] by increasing public understanding and making the process more user-friendly.” Zgolinski also questioned several recommendations, including one proposing that the village, “while emphasizing the historic village character, avoid rigidity in regulations and encourage innovation especially with regard to alternative materials within the traditional context” in structural renovations. “The essence of historic preservation is the use of historic materials,” Zgolinski said. “There are national standards”¦ that I think our district should comply with.”

Plea against trails and tourism

Bob Leonard told the Village Board that “I’d like to keep Cold Spring the small town it is” and “to keep our area residential as it is” around Constitution Drive, where he has lived since 1982. “I feel the advent of more hiking trails, more tourism, more traffic, more commuters, is not what I want. Yes, we do need improvements on Main Street; we need to revitalize,” Leonard acknowledged. “We need to bring in more business, but not at the expense of the residents that are not in the business district.” The Constitution Drive neighborhood borders the former Marathon Battery plant property on Kemble Avenue, a potential development site, and the old Kemble-Campbell estate above the railroad tracks, a large expanse of lawns and trees owned by the environmental and historical conservation organization Scenic Hudson, which also owns the nearby West Point Foundry park.
Resident Dar Williams pointed to vehicles, not visitors, as the culprit. She praised the draft Comprehensive Plan for its attention to alternate modes of transportation, including bicycles and foot traffic and better reliance on trains and boats to bring in visitors. “I think it’s the cars that create a lot of that sense of congestion and the overwhelmingness of the visitors,” she said. “I really appreciate all the different ways that you’re making this town accessible to people, so they can appreciate the history without leaving a heavy footprint.” She called for balance in “getting to the spirit of the village and harmonizing, getting the money and the tourists into the businesses of this town while at the same time retaining the character.”
Thomas Ambrose also spoke positively of the plan, saying it “will enhance the ability of the village to make good choices in the future.” However, he suggested the plan address the aging Lunn Terrace overpass, which carries car traffic above the railroad tracks. Ambrose described the span as crucial to the vitality and cohesiveness of the village.
Scott Francis, a representative of the Building Bridges, Building Boats program, commended the Village Board and all those who have worked on the plan and “put in a tremendous amount of hours doing what you’re doing right now. We appreciate that. Secondly, we are proud and enthusiastic that we played a small role in the plan in development of the Dockside parcel. This will provide more access to the river, in all its glory.” His program teaches youngsters to handle river craft and promotes community rowing and interaction with the Hudson River.
In presiding over the hearing, the Village Board members made few remarks.

More work, less pressure
“The purpose of the public hearing is for the board to listen,” Village Attorney Stephen Gaba explained at the beginning. He informed the audience that after the board pores through the written comments, it will revisit the draft and make any needed revisions.  One came to light even before the hearing began: Last fall, the Special Board had removed draft language consideration of a street link between Lunn Terrace and The Boulevard, which intersects Constitution Drive above the railroad station. Nonetheless, the plan’s summary included a reference to the link that escaped the editing of both the Special Board and the Village Board. The Village Clerk’s office promised the pesky reference would be promptly removed. Given that deletion and the likelihood of other alterations to the current text, “there absolutely will be another public hearing” in the future, Gaba said.
Upon formally accepting receipt of the draft plan from the Special Board on Dec. 14, the Village Board had 90 days to conduct the public hearing, prompting the mayor and trustees to convene marathon mark-up sessions. “From here we can kind of relax,” Mayor Seth Gallagher observed. While continuing to improve the plan, “we’re not under the type of pressure we were before to meet a deadline.”
Photo by L.S. Armstrong