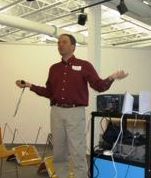 Geocaching is one of those buzz words which seem to appear one day and have you scratching your head in an “I think I should know what this is, but I don’t” kind of way.  Putting the two components of the term together gives a clue, the prefix geo meaning earth and cache meaning hidden storage space.  So how can hidden storage spaces in the earth translate into both an enjoyable recreational activity and a new tool for scientific research?  All was explained and demonstrated in a recent geocaching workshoppresented by the Cornell Cooperative Extension of Putnam County’s 4-H Youth Development program at Desmond-Fish Library.  The program was open to both adults and older children and the attendees were indeed a mixture of adults, high school students and a middle-schooler. 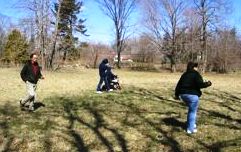 Geocaching is basically a high-tech treasure hunt, using Global Positioning System (GPS) receivers to locate and retrieve containers which have been hidden up, down and all-around.  All around the world, in fact, as geocaching is now turning into an international craze. The program began with a welcome from Cornell Co-op’s Dena Altavilla.  She then introduced the day’s instructor, Gordon Hubbard, the Peekskill chairperson of 4-H, a science teacher at Peekskill High School and a geocaching enthusiast.  Hubbard’s wife Pat was also there, helping in particular with the initial learning curve on the GPS equipment. Promising that by the end of the class participants would be able to find and make geocaches, Hubbard noted that geocaching has expanded greatly over the past couple of years.  Hubbard started by tracing the origins of the compass.  As early as 200 B.C. magnetic powers were noticed in lodestone, and slabs of lodestone themselves were used as navigational tools.  The development of magnetized needles made from lodestone followed.  Marco Polo brought the concept to Europe and the compass remains a fundamental component of navigation today, only recently overtaken by the GPS.

As Hubbard explained it, GPS, which was invented in the early 1970s, consists of a ring of 27 solar-powered satellites which spiral around the earth in a geo-synchronous orbit. Signals arrive at slightly different times and a triangular mathematical calculation programmed into the receiver determines location.  As compared to a compass, which gives direction only, the GPS is able to indicate a finite point. GPS has an accuracy range of 25 to 30 feet.  Aside from the commonly known usage in vehicles, it has also been used to locate lost hikers and dogs, in global search and rescue missions, in topographical identification, in ambulances and in military operations, for instance to aid tank divisions in terrain new to them.  It has even been used to track elephant movements in Kenya and to aid farmers in machine planting rows of corn with the exact 33″ spacings needed to create the perfect lines needed for optimal growing.
Although there are 27 satellites out there orbiting, only three signals are needed for a good earth-bound location finder (for an altitude locater 4 signals are needed).  In general five or six signals are accessed.  The GPS satellite itself is about 2,000 pounds and approximately 7 feet across. A tutorial in how to use the GPS receiver in relation to geocaching followed the explanation.  Using an eTrex model, participants were guided through the use of multiple screens, toggles and buttons to find a listing of their “waypoints” — the location where GPS coordinates have been saved.  These waypoints can be located anywhere on earth or in space, but in this instance they were all located somewhere on the grounds surrounding the library.  By reading their GPS correctly, following along from the information provided, which includes which way you are going, how many feet away from the geocache you are and how long it will take you to reach it based on your current rate of speed, geocachers can track down the hidden caches, which, in this instance were different colored markers, stored in plastic containers. 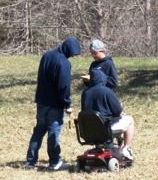 As part of the day’s exercises, the geocachers-in-training not only needed to find the six pre-set caches, but they needed to replace the marker with a granola bar and then re-set their caches elsewhere, so there were actually two rounds of searches.  A spinning signal on the compass screen of the GPS receiver indicates very close proximity to the waypoint, but geocachers need to remember that the system doesn’t take into account buildings and other structures, so often things which seem quite near require some thinking to figure out if they are behind something which the receiver can’t pick up on.
Soon the participants were off and running, climbing, searching, constantly consulting their receivers.  Most met with quick success, including three brothers, Judge, Trevor and Julian Mastrantone, who were uncovering the markers at a rapid pace, while their parents searched separately.  The Mastrantones found out about the program through a flyer distributed at Haldane, and thought it sounded like fun.  Jen Stengle, an adult participant, came along because she “loves to hike, and most importantly, I can use this for work.”  Stengle works for the Cornell Cooperative and sees geocaching as a great tool for natural resource management.  By getting groups of kids to help out, marking the locations of trees affected by the destructive emerald ash borer, they will better be able to track the range of this invasive species.  Stengle also says it has applications in monitoring PH levels along streams, and trying to solve the riddles of why there is more pollution in some areas than in others. 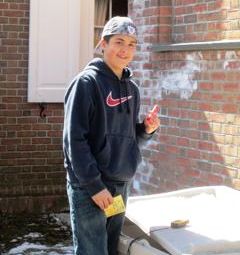 Workshop instructor Gordon Hubbard uses the GPS receivers in many ways in his science curriculum.  He formerly used them for students in the ninth grade and up, but he has now used it for kids as young as fourth-grade, coming up with “amazing applications.”
The program concluded with a return indoors, where Hubbard went over the broad strokes one more time:  it’s a great way to explore; the journey is the greatest reward; if you take something out of an unearthed geocache be sure to leave something of equal or great value; to create a geocache all you need is a durable box, usually made of plastic to protect from the elements; State Parks require a permission label and all geocaches must be placed within 20 feet of an existing trail.   Hubbard directed participants to http://www.geocaching.com/, which he said was a comprehensive site. A quick visit to the home page indicated that, as of this writing, there are 1,329,580 active geocaches around the world! 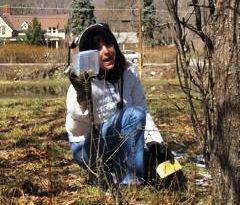 Other Putnam 4-H Youth Development programs include animal science, sewing, engineering, ‘insectiles’ (insects and reptiles), video production, puppeteering, orienteering, shooting sports and more.  All are reliant on volunteers, and more are being sought from this side of the county.  This year the Putnam County 4-H fair, held from July 29 to 31 at Veterans’ Memorial Park in Kent, will be celebrating its 40th anniversary.  For more information on all of these programs contact Cornell Cooperative Extension at 845-278-6738 or e-mail [email protected]
Photos by A. Rooney