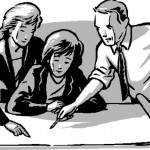 Although the Cold Spring Planning Board (CSPB) voted on Feb. 22 to declare itself the lead agency, under New York State’s Environmental Quality Review (SEQR) law, for Scenic Hudson’s proposed West Point Foundry Preserve project, the board has yet to notify other state, federal and local agencies of that intention.  At its April 26 meeting, the board again found reasons to further delay the action, to the obvious consternation of the Scenic Hudson officials present.  The communication to other agencies would begin a 30-day clock during which the agencies, such as the state Department of Environmental Conservation and the Putnam County Health Department, would have to assert objections to the plan or allow it to proceed.  Scenic Hudson has already been working with relevant agencies to address their concerns in advance of the formal review period.  The move would also speed up the CSPB’s consideration of the project. The Cold Spring Historic District Review Board issued a Certificate of Appropriateness last week.
Scenic Hudson had urged the CSPB to adopt the lead-agency stance at a Jan. 24 meeting — and expressed optimism about beginning construction in the summer when the CSPB did so at its February meeting.  At that same meeting, some board members continued to raise questions about a proposed re-engineered internal road that Scenic Hudson said would be used for weekend and special events to provide cars a second means of access to the site from Chestnut Street in addition to the Rock Street-Kemble Avenue entrance. The road had been a subject at several prior meetings.  A Scenic Hudson consulting road engineer had assured the board the plan for the road was consistent with existing federal and state standards for park roads. 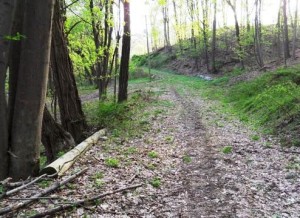 To eliminate a major sticking point and clear the way for the CSPB to notify the other agencies, thereby moving the project forward, Scenic Hudson announced at the April 26 meeting they no longer planned to use the internal road as a vehicular entrance.  Instead they would leave it in its existing state as a hiking trail pedestrians could use to enter the park, which they do now. The change in plans did not have the desired effect. CSPB member Placito Sgro, who had previously questioned the construction standards of the proposed road, now opined that not using the internal road for vehicles might present problems to the village with too much traffic using the Rock Street-Kemble Avenue entrance and the Kemble Avenue exit, thereby requiring additional policing at times.
“Our goal and expectation is to keep special events at a minimum.  We will contact the village police chief whenever we have one and we will work with him to determine if any additional traffic coordination is necessary. We have owned this property since 1998 and we are not aware of the village experiencing any problems with traffic; we’ve never been contacted about it,” said Steve Rosenberg, executive director of the affiliated Scenic Hudson Land Trust, the land owner and official applicant before the board.
Member Joseph Immorlica said he believed Scenic Hudson had to construct a sidewalk on the lower half of Kemble Avenue to protect pedestrians entering the site from vehicular traffic. Scenic Hudson took exception to that.  Scenic Hudson owns the lower section of Kemble Avenue just outside the gate leading into the park although the village has had use of it. During a long discussion, Scenic Hudson argued that the grade of the road at the end of Kemble Avenue was too steep for a sidewalk, that it wouldn’t add to safety, that the cost of construction and maintenance in winter would be unnecessarily burdensome, and that the application before the board was for a site-plan approval, not a sub-division, which would require a sidewalk. 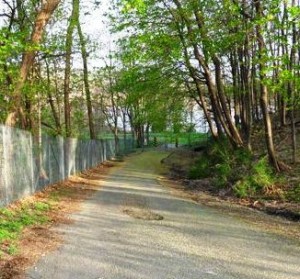 Sgro and Immorlica continued to argue a sidewalk was doable and necessary and should be required.  “As far as I’m concerned, we already agreed a sidewalk is going in. I won’t let go of this,” said Immorlica.  Chairman Joseph Barbaro and member Karen Doyle disagreed.  Doyle suggested Scenic Hudson offer pedestrians some direction as to where to walk to promote safety, an idea Scenic Hudson embraced.  Barbaro polled the board on the matter resulting in a 2-2 split with fifth member Arne Saari declining to vote before he walked the road, putting the issue off to the next meeting.
Sgro also raised drainage and erosion concerns on the internal road even though it was no longer intended to be engineered for vehicular use.  The Scenic Hudson team responded there were no problems with the road now and they had no plans to spend money on the road, since under the new proposal it would not be used for vehicles and therefore needed no further attention. Asked to comment, the CSPB consulting engineer, Rob Cameron, said he would need to revisit the site to make a determination.
“What we are proposing is a passive park with hiking trails in the woods.  When it rains it gets wet.  We want to have as light a footprint as possible.  It is not intended to be anything more,” said Rosenberg, who appeared frustrated by the sidewalk and drainage questions.  “We have created parks and preserves up and down the Hudson and there’s never been a decision denied because of drainage,” he said. “This process is costing us hundreds of thousands of dollars as it goes on.”
“We cannot put pressure on the consultant to satisfy your intent.  Just give him enough time,” said Sgro.
With the sidewalk issue and other smaller issues already cause for further delay, the consensus was to have Scenic Hudson officials meet the board’s consultant at the site to sort out issues regarding the road or to clarify other matters. “I get the feeling we are being pressured to get this project moving,” said an agitated Sgro, a long-serving member of the CSPB. “We put enough time in on this board trying to get things done.” Board members, volunteers appointed by the village board of trustees, serve five-year terms. “We appreciate the time and commitment the board puts in,” said Rosenberg, smoothing the waters.
Throughout the meeting, Kim Mathews, a principal in Mathews Nielsen, a landscape architectural firm and lead consultant for Scenic Hudson,  emphasized the importance of resolving all remaining issues needed to get the SEQR process started as soon as possible so Scenic Hudson would know where they stood with the other agencies. While sympathetic to her concern, chairman Barbaro would only commit to scheduling another meeting on May 24 to review new Scenic Hudson drawings reflecting the road change, receive Arne Saari’s view of the sidewalk issue, and receive the board consultant’s report on the internal road. The meeting than went on to address a myriad of smaller matters from a prior consultant’s report, many made moot by the withdrawal of the internal road proposal.
In an e-mail exchange the next day with Philipstown.info, Rita Shaheen, director of parks for Scenic Hudson, said: “Scenic Hudson is optimistic that we will receive all necessary approvals and begin making site improvements during the fall 2011 construction season and complete in 2012.  We appreciate that the planning board is so engaged and working with us to make sure the project is the best it can possibly be.”
Photos by K. Foley