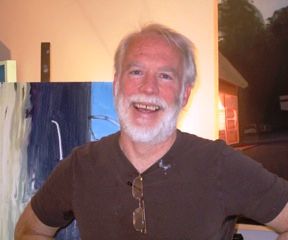 A very common tale: artistic talent sidelined in the name of making a living.   Less common is the dream second act coda: putting the guaranteed earning of a living on the backburner and jumping onto those creative hot coals once again.

Terence Donovan is one of the few doing just that.   Giving up his successful commercial painting business, he is re-visiting what drew him towards those gallons of color in the first place and putting brush to canvas rather than to the exterior of someone’s home.

Last November (2010), Donovan took the plunge and opened up his own gallery on Main Street in Cold Spring.   “I was just ready.   I was thinking about it negatively for a long time because I’ve seen so many galleries come and go – I thought I’d never open one - it won’t last, et cetera - but – “here I am.” 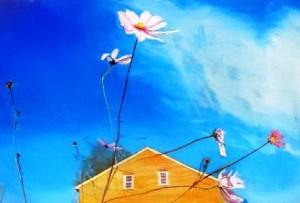 Doing the painting contracting (and it wasn’t painting of the decorative kind, rather “straight up painting of houses”) was “not a happy medium” for Donovan, because “if I was making enough money I didn’t have enough time to paint.   So I made this jump.   It’s been interesting.”

Donovan’s space holds not only his retail gallery, but also his studio. Opening in winter was its own adventure, “I’m glad I went through winter first because I wasn’t sure about the quiet, but I got a lot of work done.”   Actually, it wasn’t all that serene in the gallery when Philipstown.info visited on a still-chilly April day, as music was blasting, for Donovan always paints to it. (Tom Petty was the muse of the morning.)

Without the steady stream of visitors that spring and summer bring, Donovan used winter’s learning curve to master the art of drawing passersby into the gallery, “Basically anybody who stands outside for a minute - I wave them in.   Quickly, people start talking about their lives. You never know who is coming in.   True, there wasn’t a lot of traffic - it’s not as if we’re a “we need two landscapes before we pick up our kids’ destination! But then again on one of the most awful days of winter I had two interesting visitors who were buyers for a private collection. They gave me hope; one said “this is how artists used to do it in the ’60s, with a gallery in their studio.”

Donovan considered other locations, including Beacon, with its host of galleries, where he looked at a couple of spaces, but he decided that ultimately, “you want to be where you know everybody, and coming to Main Street, Cold Spring was what I needed to do.”

A lot of his paintings, many of which are ‘townscapes,’ are the result of local commissions, both from locals and farther afield (a couple in Florida happened to see some paintings Donovan did in the Hamptons and wanted something similar but with a different landscape.)   Donovan is promoting the gallery and his work through a New York City push with decorators and designers, some of whom are contacts from his previous endeavors.

The commissions are “an exercise in problem-solving,” according to Donovan, “some of the work is done for you in terms of what you’re painting. Your choices can be limited but in a way that is liberating: how can I make it work?” 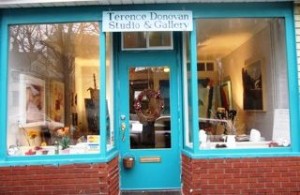 When asked to describe his work, Donovan found it easier to use someone else’s description, “They’re presented almost like memories or the inherent quality of memory being heightened or idealized.”

Continuing, he added, “It’s funny, you work and work and work and you know you have a certain amount of talent and it’s singular to some extent but it’s hard to capture in words what you’re doing.   It’s often a struggle to create something and not screw it up.  You’re going with your original inspiration and you hope to do it justice and not get in your own way.   I’m tired of artist’s statements with seven-dollar words in them.  There are certain things I do in a painting - I like to start with a good composition.”

The importance of composition stems from an encounter Donovan had decades ago with famed street scene photographer Helen Levitt. “I had a revelation in looking at her photos because I felt such warmth and emotion in them; they blew me away.  I wrote to her and she replied back with a “Why don’t we meet?’  She was pretty old, sharp-eyed, birdlike-not in a creepy way!  Her apartment was full of kidney-shaped ashtrays and things like that.  I finally got up the nerve to show her my photographs.  She looked at 10 or 12 of them and didn’t say much.  At the end she told me ‘You should really think about composition.’  It was not what I wanted to hear – it stung, but I’ve never forgotten it.  I’ve done paintings where I’m three-quarters through when I’ve realized the composition was a little bit off.  I’ve started the painting all over again.   It was great advice I got from her; I find it to be very important.” 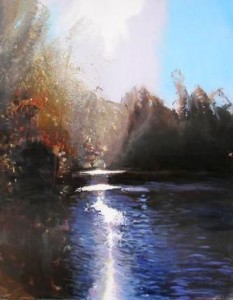 Donovan was born in New York City and grew up on the Jersey Shore.   He was always interested in art, and remembers pulling out volume “P” of his encyclopedia set and looking up painters.   He recalls taking his sister’s paint-by-numbers horse set and painting the horse without the numbers.   Donovan studied animation for a couple of years at Sheridan College in Oakville, Ontario, which he says is now a pipeline to Disney.

Donovan teaches animation classes today, in Peekskill and elsewhere and hopes to start up some classes in his studio, both in animation and painting, for teenagers and adults.  Returning from Canada to New York, he studied at the Art Students’ League and began his working career, which included a few years spent as an assistant animator, “cleaning up animation drawings, keeping them consistent, sitting at a light-box all day. I found I couldn’t do my own work.  I switched to painting contracting so I could make my own art.  I supplemented it by working in record stores, as a gardener, all kinds of stuff, and I always kept painting, even if it was just for a couple of hours a week.”

Eventually it got harder and harder to manage the dual strands, and so Donovan is extremely appreciative of what he has going right now. “When I’m here painting there’s no struggle – it feels very natural.  Some artists need their privacy and can’t do fishbowl.  It doesn’t bother me.   I like that I’m out.  I’m not a big self-promoter so the assertive thing I do is just being here.”

The Terence Donovan Gallery is located at 165 Main Street.  For more information visit terencedonovan.net or phone 917-974-7303.