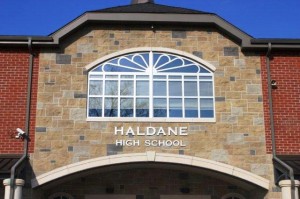 The May 3 meeting of the Haldane Board of Education also served as a Budget Hearing for the proposed 2011-12 spending plan that will go to the voters on May 17. Before a scant audience Superintendent Mark Villanti did not present a detailed review, instead opting to go over budget highlights contained in Haldane’s current “Horizons” newsletter. Proposed spending totals $21,630,013 – an increase of .78 percent which translates to a projected tax levy increase of 1.82 percent. The final tax rate won’t be calculated until August when updated tax assessment figures are known. Villanti underlined how the state’s financial woes have impacted Haldane, pointing out that “state aid is within about $8,000 of what it was four years ago.” At the same time he said the cost of transportation, fuel oil, wages, pensions and other costs have risen considerably. The entire proposed budget and the newsletter summary can be found on the Haldane website.
Board president Dave Merandy and Trustee Mike Junjulas, both of whom missed the budget vote when it was held at a previous meeting, spoke strongly in favor of the spending plan at the May 3 meeting. Merandy tried to put the proposed budget into a larger context. “We can’t lose sight of what we have,” he said. “Look at what other districts are doing in terms of layoffs. We’re doing very well – with no layoffs.” Merandy also pointed to a range of positives at Haldane – from what he called ” some great hires” and academic accomplishment to the beauty of the campus and the success of Haldane’s sports teams. “It’s not a great time in the world’s economy. Hopefully it’s just for a few years. But we also have to keep in mind what we have here.” 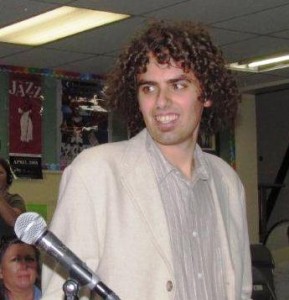 Trustees, administrators and teachers paused to honor Dashiel Kemal, a vocational student who attends BOCES. Each year, the Putnam County Retired Teachers Association (PCRTA) contributes ten $175 scholarships and six $50 Campbell Family Awards to students who attend school in Putnam County.  PCRTA President Virginia Gross was on hand to present Kemal with a Campbell Family Award certificate. Gross said that Kemal is “hard working, eager to learn and has a very positive attitude.” Kamel, who is enrolled in the Food Services Program, attended the presentation along with his parents and Stanley Rupinski, the BOCES chef who recommended him for the award. PCRTA members each pay an annual fee of $10 to fund the awards program.

Excess funds to be slated for reserves

Trustees passed a resolution authorizing the transfer of any fund balance prior to June 30, 2011, to the district’s reserves. The establishment of reserve funds over the past few years has helped the district weather the financial storm caused by the weak economy and reductions in state aid without any cutbacks in its academic program or teaching staff.

Villanti reported that the final two candidates for principal of the elementary and middle schools have been interviewed one last time. He will bring a hiring recommendation to the next board meeting after informing the selection committee on May 4. Villanti said that the excellent credentials of both finalists have made the hiring decision difficult. “It’s a gentleman,” he said. “I’m not giving away any secrets. Both finalists are men.” Maggie Davis who currently serves as principal will retire at the end of the school year. Villanti also said that candidates for Social Studies and Spanish teaching positions in the high school are being narrowed before hiring recommendations are made. He said that with more than 200 applicants, the selection committee was having “an equally difficult time” in deciding the best teachers to hire.

Under-spending equals more repairs
Recent roof repairs completed at Haldane came in under budget due mainly to highly competitive bids received as contractors scramble to find work. As a result of the cost savings trustees were able to award Woodland Manor LLC a contract to complete additional work at Haldane’s main building, administrative building, bus garage and grounds. The $217,500 contract includes repairs previously identified as priorities such as improvements to the storm water drainage system, installation of rip rap, electrical works and paving.

Starry, starry night
Haldane’s Fine Arts Committee is taking a page from the Grammy’s as its plans are set for a night to honor student artists, musicians, writers and actors. “A Night with the Stars” will be held on May 17 – the same evening as the budget vote. “I’m juiced about this ” Villanti said. “There will even be a red carpet for the nominees to walk down.” Students nominated for recognition have already received invitations and the program is open to everyone. The evening, which will also celebrate contributions by faculty and advisors who assist students, begins at 6 p.m. in the small gym. Villanti said that arts students will be awarded stars, much in the way that student athletes have traditionally received letters. “This is the first time for this event. It will be a ‘Grammy’ atmosphere. It’s going to be a big deal.” A big enough deal that Villanti advised that participants should wear formal attire if possible.

A textbook case
After considerable discussion at their last workshop, trustees voted to approve the purchase of a new grade four Social Studies textbook from Houghton Mifflin at a cost of $7,740.81 – about $60 per book. Villanti said that the purchase is in the current budget and that while text books are supported by state aid, “If you don’t spend it you lose it.” He also said that if such funds go unspent the state allocation is decreased the following year.  He said that some texts, such as the one used for Global Studies have not been upgraded since 1994.  “We’ve researched this for three tears. We’re not spending just for the sake of spending.”
“I’m happy to hear that – that’s it’s not just an 11th hour request” Merandy said.
Photo by M. Turton