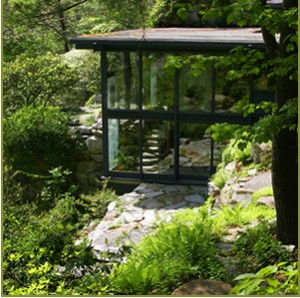 In choosing the design honorees for their 2011 benefit, Manitoga looked to today’s equivalents of Russel Wright, the famous industrial designer whose home and designed landscape comprise the Garrison site. In 1962, Russel Wright and his daughter Ann had just moved into his house and studio, Dragon Rock, at Manitoga. After having had an overwhelmingly successful career in designing a wide range of products for the American home in the 1930s, 40s and 50s, Wright turned his efforts toward the completion and refinement of his most ambitious design.
At the same moment in Chicago, Carole and Gordon Segal were inspired to create a contemporary housewares business, partaking in Russel Wright’s dictum that good design is for everyone.  The recently-married Segals wondered why the simple, well-designed tableware they had seen in Europe on their honeymoon was not available in the United States. Knowing that there must be other young couples just like themselves — with more taste than money — they opened the first Crate & Barrel store in December, 1962, in part of an old elevator factory in Chicago’s Old Town neighborhood.  Today Crate & Barrel has over 7,000 employees and more than 100 stores across the country and overseas as well.
Cold Spring’s Glynwood is also being honored, in this case for its pioneering work in environmentalism, sustainable local agriculture, and community-building.  According to Manitoga, “As Russel Wright believed passionately in the power of nature to restore and teach us, Glynwood’s vision and practice are creating important human connections with the land.” In 1929, the Perkins family purchased Glynwood, bringing a strong conservation ethic to their farm. Upon Evelina Ball Perkins’ death, her family preserved Glynwood Farm, making its core the site of a not-for-profit organization dedicated to rural conservation.  With help from the Open Space Institute and Open Space Conservancy and funding from the Lila Acheson and DeWitt Wallace Fund, the forested uplands of the 2500-acre estate became part of Fahnestock State Park, while the 225-acre core became Glynwood Center. In 1997, Glynwood absorbed the Countryside Institute and its Countryside Exchange program, which served as a “field laboratory” for understanding the needs of rural communities and provided the intellectual underpinnings for Glynwood’s mission of helping communities in the Northeast save farming.
The annual Russel Wright Award Brunch and Auction celebration takes place this Sunday, May 22 in Mary’s Meadow at Manitoga, 584 Route 9D, in Garrison.  The day’s events include brunch catered by Riverview Restaurant, featuring local foods from Glynwood, and Manitoga’s signature auction with Sotheby’s David Redden, offering an exciting collection of modern designs and home furnishings, as well as fabulous excursions including Beacon: Be There or Be Square, The Dwell on Design Conference in Miami, and a Buck’s County, Pennsylvania getaway weekend. Guests are also invited to stroll the grounds of Manitoga and visit Russel Wright’s house and studio.
For more information on the benefit and on Manitoga’s tours and programs visit http://www.visitmanitoga.org/ or call 845-424-3812