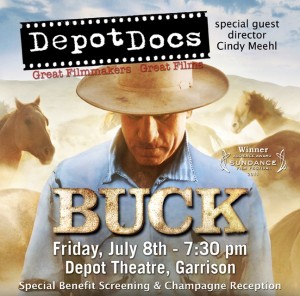 Dan “Buck” Brannaman, the subject of Cindy Meehl’s poignant and deeply affecting, multi-award winning documentary that will close Depot Doc’s 5th season at the Philipstown Depot Theatre on July 8th, grew up in Idaho and Montana in the 1960’s. He was already riding horses at age 3, when he and his older brother Smokie were press-ganged into a life as a rodeo trick-roping act called the Idaho Cowboys by their father, Ace Brannaman. By the time Buck was seven, he and his brother were members of the Rodeo Cowboys Association, were performing in local rodeos around the country, and had appeared in a nationally broadcast TV cereal commercial as the “Sugar Pops Kids.”  They were living the dream life of show business cowboys, but a life that was, in fact, a nightmare. “Our choice was practicing roping tricks or getting whipped,” Buck says of the extreme physical abuse the two boys suffered at the hands of their alcoholic father.
Fast forward to 2003, when Cindy Meehl, herself a horse rider since childhood, brought what she describes as “a really dangerous show horse” to one of Buck’s “natural horsemanship” clinics.  By then, Buck Brannaman had become a world-renowned horse (and rider) trainer, the inspiration for Nicholas Evans’s novel The Horse Whisperer, the lead consultant (and Robert Redford’s double) on the film of the same name, and the author of a memoir, The Faraway Horses: The Adventures and Wisdom of One of America’s Most Renowned Horsemen.

Ms. Meehl had made her mark as a fashion designer and fine arts painter. The closest she’d ever come to the world of film was having her designer couture worn by actors in movies. However, after attending more of Buck’s clinics, watching him work with difficult horses and their owners, and developing something of a friendship, she decided that a documentary film had to be made about him, and about his gentle, empathic ways with horses and with people that has won him universal admiration. What made her think she could create such a film, never having so much as made a short, or even attended a film class? “I guess the same thing that made me think I could be a fashion designer,” she says. “I’ve always done what I set my mind out to do.”
Well, yes, determination, and the ability to convince experienced, knowledgeable, and equally sensitive film people to work with you. In Ms. Meehl’s case, she was able to assemble a crew of highly talented and successful filmmakers, all of whom happen to be women. Among them: Andrea Meditch, who was Executive Producer on the Academy Award winning Man On Wire; Julie Goldman, who has produced a wide range of award winning documentaries, and was recently nominated by the Producers Guild of America (PGA) for the PGA Producer of the Year Award; and, the Depot Docs’ own Toby Shimin, whose editing has given Buck’s complicated story, ranging far and wide in time and place, and the film’s road-trip format, an elegant, fine-tuned, emotionally powerful flow.
Buck will be shown on Friday, July 8th, 7:30 p.m., at the Philipstown Depot Theatre, Garrison’s Landing. This will be a special benefit screening, followed by a Q&A with director Cindy Meehl, and a Champagne reception. To order tickets, call the theatre at 845-424-3900, or go to www.philipstowndepottheatre.org.
For a recent article about Toby Shimin, who won a Sundance award for editing Buck, click HERE.