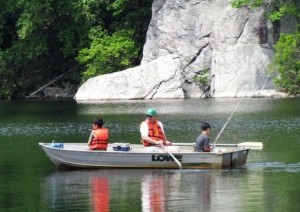 It seems that locals everywhere can fall prey to the notion that, “Geez, there’s nothing to do around here!”

Anyone in Philipstown who finds themselves thinking that needs only to look a very few miles west down Route 301 to Fahnestock State Park. It’s so close that people may be forgiven for overlooking the variety of outdoor recreation opportunities to be had there – from a sandy beach, boat rentals and 50 miles of hiking trails including part of the country’s most famous trail – to overnight camping, picnic areas, fishing and a nature center.

Actually, locals are paying more attention to Fahnestock this year and park manager Bill Bauman thinks he knows why – the price of gas. “Attendance at all areas in the park is up this year – the beach, campground, boat rentals.

There’s been a big increase in weekday camping – even from locals. You have to book three weeks in advance for camping now,” he said.  While a study of the economic impact of the park has never been done, Bauman has his own view. “We have about 200,000 visitors a year. That has to be tremendous plus for Cold Spring,” he said, citing the regular trips out-of-town visitors make into Cold Spring to purchase gas, groceries, ice, beer, meals and other goods and services. 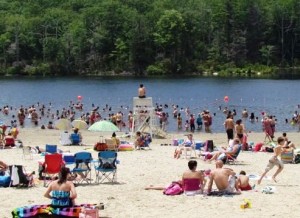 The beach at Canopus Lake

If the price of gas is keeping local residents closer to home – the reasonable cost of using Fahnestock as a family playground may keep them nearby even longer. A day pass costs  $7 per vehicle. A season pass is $30 and for $65 park visitors can purchase an Empire Passport that provides unlimited day use vehicle entry to most New York’s State parks and recreational facilities for the year. Camping is $15 a night,  $4 more on weekend nights before a Monday holiday. You can rent a row boat for $7 an hour or bring your own canoe or kayak. Pack your own picnic or take advantage of concessions. 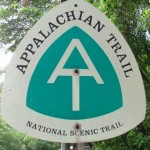 Fahnestock may be best known for its trails – some 50 miles worth. The 1½  mile trail at Pelton Pond is the most used. It’s an easy hike for families and has plenty of picnic tables, a shelter and charcoal barbecues. If you are looking for something more substantial, try part of the 2,180 mile Appalachian Trail which runs right through the park. Make a wrong turn south and you could hike your way to Georgia. Go north and you’ll end up in Maine. “They’re an interesting bunch and we get to meet most of them,” Bauman said of the Appalachian Trail hikers who get one free night’s camping as they pass through Fahnestock. “Recently there have been a lot of grads right out of college – but also a lot of older hikers in their 60s and 70s.” The park has numerous other trails that feature lakes, ponds, wetlands and streams. Trails are marked and most grades are considered moderate. The park brochure includes a number of suggested hikes in the four to nine mile range. 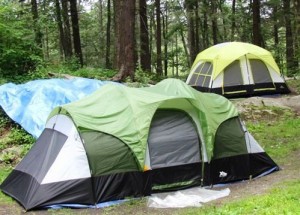 Weekday camping is on the increase

The wooded campground has 81 sites for tent or trailer camping. “Campers tend to be a real mixed bag,” Bauman said. “They come from everywhere – Nebraska, Wisconsin, Quebec. We had someone from Switzerland camp here on his way home. A lot of people like to camp here to be close to New York City.”

If you plan to go the Canopus Beach on the weekend get there early. The beach is wide, sandy, well maintained and is a mecca for families on weekend outings. Canopus Lake also offers row boat rentals and is popular with kayakers and canoeists who bring their own boats. 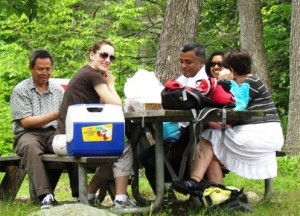 The park owes its existence to Major Clarence Fahnestock, a Manhattan doctor who purchased abandoned farms in the area around 1900. He also purchased the Pennsylvania and Reading Coal and Iron Company’s property.  Major Fahnestock died in France in1918. In 1929 his brother Dr. Ernest Fahnestock donated 2,400 acres to the state to create a park in honor of his brother. He donated an additional 105 acres for the creation of Canopus Lake. The Citizens Conservation Corps, (CCC) part of President Franklin D. Roosevelt’s “New Deal,” was responsible for much of the park’s early development in the 1930s, including picnic facilities, the campground and the creation of Canopus Lake and Stillwater Pond.

The picnic shelter at Pelton Pond, also built by the CCC, displays poems written by the workers as they endured the Great Depression. The trial at Pelton Pond includes a glimpse of a former iron mine, one of many that were common in the area during the heyday of the West Point Foundry in Cold Spring. One of the park’s other trails, the Old Mine Railroad Trail, in part follows the rail bed of a Civil War era, mule-drawn railroad used to haul iron ore. 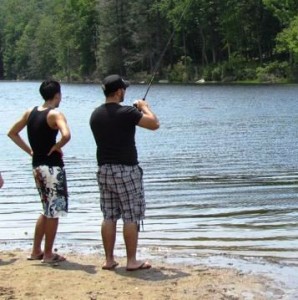 The one that got away

As a result of other purchases and donations of land over the years the park now covers 14,086 acres. In the 1990s The Open Space Institute (OSI) acquired and subsequently sold property from the estate of Helen Hubbard, Fahnestock’s sister, to New York State. Hubbard Lodge on Route 9 bears her name today.  Around the same time additional property was acquired by OSI from the Perkins estate and later sold to the state. Today those properties are called the Hubbard-Perkins Conservation Area which is administered by Bauman and his staff.

They also manage a number of other state-owned properties stretching from the Paddle Sport Center at the Annsville Circle in the south to Denning’s Point in Beacon to the north. Hudson Highlands State Park, Little Stony Point, and Cold Spring’s Dockside Park in Cold Spring are also among those properties.

The joys of running a park

Asked what his biggest challenges are in running Fahnestock, Bauman didn’t hesitate, saying “The campground. People staying overnight – quiet hours have to be enforced. And the trails – people getting lost on them.”

For more information visit the Fahnestock website.  Better yet, take the ten minute drive to the park, get out and explore.