Sssshhhh, don’t tell all the folks who have been opening galleries on Cold Spring’s Main Street over the past year that a dire economic climate dictates closing up shop, not a venturing forth.

The latest Cold Spring cultural soldier is Linda Stewart, whose new Concrete Gallery sprang into existence about a month ago. Stewart, whose Philipstown family roots go back for six generations, has planned an intentionally short life for her new seasonal gallery, intending to stay open through the end of September only, and, if all goes well, returning in the warmer weather next year.

Stewart anticipates not turning a profit this year, but profit is not her motivation right now. The art business is arbitrary and often not profit-making. “I’m not losing yet, but I thoroughly expect to lose  but I can’t lose consistently.” 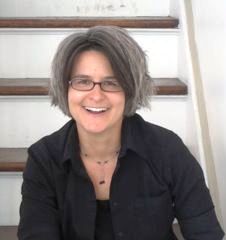 Instead, Stewart is looking to create a space of her own design, a simple model, in Cold Spring, and with it, to prompt a stable of proven local artists, all with multiple solo gallery showings behind them, to create anew.

“I know my artists.  I’m doing this casually, with my own style, not trying to play to an existing community. The artists who will be showing their work are all great artists; none have had less than 12 shows. I’ve worked with all of them before, either when I was working at other galleries and museums, or, when I was an artist, when they would give me shows.

Stewart has the confidence to begin this venture because she has a great deal of experience in the gallery world.  Stewart initially studied sculpture and film. She began working with multiple-object pieces within large spaces, often warehouses. “I did that between 2002 and 2006, based in Beacon.”

More recently Stewart was the curator at the Beacon Institute for Rivers and Estuaries, a position she held for two years. She is savoring her independence, calling Concrete Gallery a project “and I needed a project.” 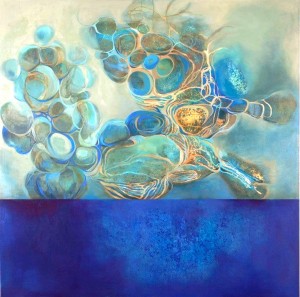 Although her family dates back multiple generations in Philipstown, Stewart did not grow up here. In fact, she was living in California when her mother, who had moved away from the area, returned to help her grandmother, Libby Healy. Stewart followed, and felt an immediate connection to her roots.

“My great-grandfather’s office was where the deli is now. He was a defense lawyer in the early part of the 20th century, very active in building the community. I’m also related to the Dales. There are a lot of Dales around here.”

Another forebear is George Lunn, for whom Lunn Terrace is named.

For the past decade, Stewart has had a hand in running galleries in Beacon, something which was triggered by her viewing of a large 1999 group show at the now-gone Collaborative Concepts gallery on Peekskill Road in Cold Spring.  That gallery was started by Peter Clark, who, according to Stewart, had a little shop in Cold Spring. He became ill, and they appointed a director, Richard Bruce.

“It was Richard who suggested that I run a Collaborative Concepts gallery with him in Beacon. It was really Philipstown people who started a lot of the art movement in Beacon. Eventually we did so well in Beacon that a necessary cultural shift has happened; people need to shift away and let new people in.  I was talking to [artist and Marina Gallery constituent] Martee Levi and told her I needed a project. Martee got all excited and told me she wanted me to run a space, she wanted me to be near her.” 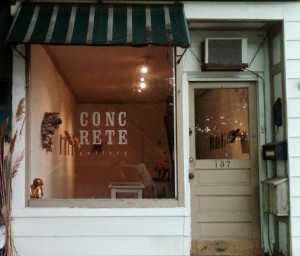 Stewart was attracted to the simple bones of her new space, and she opened it very quickly, within weeks of committing to it. She says people are responding to the simplicity of the space, which opened on June 18 as a benefit show for an artist friend, Laura Moriarty.

“We hung the work, and some funds were raised. With the next exhibit, featuring the works of Beacon’s Erica Hauser, the first real show began. There will be six artists in total showing, each in solo shows lasting two weeks per artist.”

Hauser’s lead-up to the show is an example of the aesthetic of the space. According to Stewart, Hauser spent May and June at artist residencies, the second which finished on June 30. “She arrived back in New York on July 1, we hung her show, full of new paintings, and the show opened on July 2. We did it!”

The exhibition features the work of Beacon’s Jen Bradford (jenbradford.com), who, a couple of weeks ago (as of this writing) rallied by the imminent opening date, was in her studio painting intently.  Stewart noted, “She’ll finish Thursday, bring them by on Friday, and we’ll open. It’s great the artists have gone up to their studios and they’re coming in, excited, with paint on them!”

Contrary to expectations, in some cases it was difficult to get a commitment from the artists for the best of all possible reasons: many were booked solid. Despite this, Stewart said there were more Cold Spring and Garrison artists than she could fit in this opening season. The upcoming artists and their genres, are: