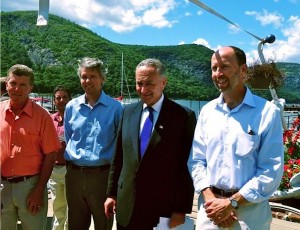 U.S. Sen. Charles Schumer (D-N.Y.) came to the Cold Spring Boat Club last Thursday (Aug. 11) to call attention and offer a solution to the complaints of Hudson River boaters that they are stopped all too often by different law enforcement agencies for routine safety checks. Click HERE for a short video.

Schumer, long known for his willingness to champion local causes, said he had asked the U.S. Coast Guard to coordinate an effort to find a method for different agencies along the river (including state police, county sheriffs and city police) to recognize that a boater is in good standing with regard to maritime safety and therefore does not require further inspection. The senator used car registrations and inspection stickers as an example that could be used universally for boats.

“We need the Coast Guard to take the lead and work with state and local authorities to come up with a system that protects our security without choking off all the fun of boating on the river. It’s not just a matter of summertime fun, but of protecting an industry that is critical to the Hudson Valley economy,” said Schumer, who praised Cold Spring as one of the most beautiful spots in New York State.  The Coast Guard, according to Schumer, is actively considering his proposal. 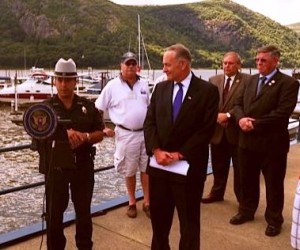 Joining Schumer at the riverbank press conference were representatives of Hudson River recreational and commercial boating organizations, led by the event organizer, Lex Filipowski, a vice president of Boating on the Hudson Media and co-founder of “Freedom to Go Boating.”

“The Fourth Amendment (U.S. Constitution) grants us rights against unreasonable search and seizure,” declared Filipowski, a Fishkill resident. “Some of these unnecessary stops can take up to 30-45 minutes. If people were stopped in their cars as we are in boats, there would be a revolution,” he said.

Putnam County Sheriff Donald Smith joined Schumer at the podium, pledging the cooperation of his department’s maritime unit, which used the occasion to launch a new, larger boat into the river. The unit uses the Boat Club pier to moor its vessels. Sgt. Michael Szabo, head of the unit, said the Boat Club had recently invited regional marine units to meet “to try and get on the same page.”

Roger Chirico, Philipstown highway superintendent, and Steve Merando, both long-time members and past commodores of the Boat Club, echoed the concerns raised by Schumer and others. Chirico said it was burdensome to boaters, especially people fishing, to have to stop and go through an inspection. “You might have two or three lines in the water at the time and you have to stop and pull everything in,” he said. The veteran boaters agreed that wrongdoing on boats and security concerns had to be addressed but that law-abiding boaters need some slack. “We’re just here to enjoy the river and boating,” said Merando. 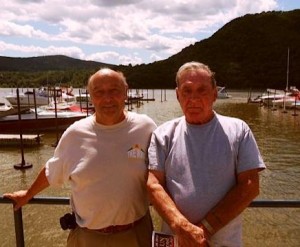