Study would review the conditions and inherent possibilities of the fields, including Mayor’s Park

The Cold Spring Village Board unanimously opted to contribute $500 toward a comprehensive study of athletic playing fields in Philipstown, an ongoing project that involves the Town of Philipstown, Haldane and Garrison school systems, and youth sports programs.  Estimated to cost about $18,000, the study would review the conditions and inherent possibilities of the fields, including those at village-owned Mayor’s Park, located near the Hudson River on Fair Street.  At a workshop on Tuesday (Aug. 16), notable both for its brevity and lack of controversy, the mayor and four trustees also approved a photo-shoot request for Brooks Brothers for Aug. 17 and 21 and temporary placement of two dining tables outside Ming Moon Kitchen on Main Street. A planned discussion of the draft Comprehensive Plan did not occur, due to illness on the part of the consultant, who had planned to attend the session to answer board questions. 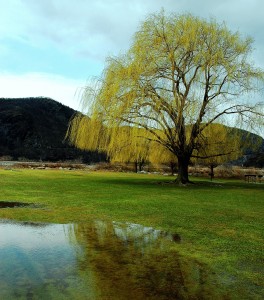 Trustee Bruce Campbell, the Village Board representative to an inter-jurisdictional committee, recommended the $500 village allocation toward the playing-field study. The Town of Philipstown Board on Aug. 4 authorized a $5,000 town outlay for the same purpose. In part, the impetus behind the study is to better distribute teams and activities throughout the town, “so we’re not over-using any of the fields.”  The village share of the cost “is probably the best $500 we could invest and make better use of what we have down there” at Mayor’s Park, Campbell told his colleagues.  Among other things, he said, the study would focus on the periodic flooding of the grounds. The whole park needs attention from the village going forward, he said, adding that any work could probably be funded through the revenue generated by park use. “I just want to start focusing on putting a little more money into that place and bringing it up to snuff,” he proposed. Improvements he suggested include upgraded lighting, painting the bathroom facilities, and installation of an additional toilet in the women’s washroom, along with a review of the overall plumbing. Currently, he pointed out, use of the park by groups often requires bringing in portable bathrooms.

“That’s kind of crazy. That’s one of the closest toilets to the sewage treatment plant,” Trustee J. Ralph Falloon commented. Campbell said he would look into the general needs of the park and report back to the board.

The board also unanimously accepted an application from BaM Productions Inc., for two days of photography at the waterfront and other public sites for a Brooks Brothers winter catalog, at a charge of $1,000 per day.

On another unanimous vote, the board granted Ming Moon permission to place two tables on the sidewalk for six months. Mayor Seth Gallagher said the village attorney is looking into the general question of sidewalk use by restaurants and that the village Planning Board probably should be involved in handling future requests. “We don’t really have an official policy” and should devise one and also charge for sidewalk use, he said. “Good! You’ve got to get some money for it,” Tom Rolston, who owns the Depot Restaurant, interjected from the audience. A week earlier, the board had discussed ways to deal with the trash generated by outdoor dining tables.

In other business, the board also approved the wording of a new request-for-proposals for an independent financial audit of the village financial books.
Photo of Mayor’s Park by L.S. Armstrong