The vinyl upholstery that covers the train seats on the Harlem, Hudson and New Haven Lines tell many stories

The vinyl upholstery that covers the train seats on the Harlem, Hudson and New Haven Lines tells many stories. Those seats of alternating blue and maroon; cluttered with the debris of dog-eared newspapers, transport me through a timeless tour of Brooks Brothers neckties and Paul Stewart suits. To arrive at Grand Central and board the 5:13 bound for Cold Spring in the year 2011 is to be a commuter across previous decades as well as a commuter of distance.

There have been only the subtlest of changes since 1978, the year I began to ride Metro-North. Sorry, one of those subtle changes was 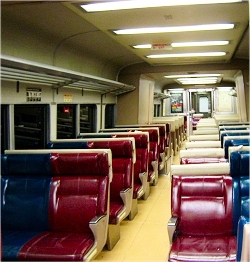 the name of the operator  Conrail at the time, not Metro-North. But that name change, in combination with the absence of those trails of smoke from the embers of cigarettes, some of which were my own, can’t conceal the timeless cultural essence of the commuter railroads. The stories that would be told on-board those cars if the seats could talk would be of the great masters of midtown, yes, but also of the occasional not-so-greats, and even of people like myself 33 years ago, too young and green to be in the master category of anything.

On the New Haven line, unlike our Hudson line, they did and still do have a bar car. It was there on just such a car in 1978, as a very green 18 year-old commuter, that I ended up on the periphery of a conversation which included a middle aged business exec who was pounding back oversized cans of Foster’s Lager at a clip faster than the speed of the express train upon which we were riding. As I eased myself into the conversation it was evident that, apropos of nothing that was obvious to me, he was telling everyone of the training he’d gone through as a Jesuit priest in his younger years. This was being told to us this in that defiant, semi-slurred speech familiar to any veteran of the happy hour commute. He was holding court with an audience mostly comprised of his peers, men of a certain age who had shed their fine woolen suit jackets to expose rumpled shirts cut from pinpoint cloth, sleeves quartered and loosened ties yanked askew as if their very fact that they were now disheveled might hasten the intoxicating effects of the Foster’s. The Jesuit had a sly ironic smile which I was drawn to, possibly because at eighteen, I was barely finished with my own slightly rocky adolescence and his subversiveness made me feel like I’d discovered a soul mate. The glamour of the moment was shattered when, in a classic example of naive and cocky overreach, I asked the Jesuit what he did for a living, since he’d obviously taken a pass on the priesthood. It was a question which apparently jolted him from the agreeable buzz the Foster’s had provided and, with a glare that was unquestionably different from that of the sly irony of his earlier smile, and most un-Jesuit-like, he answered with I’m a pimp and your mother’s my whore!  Shocking, especially in light of the fact that my mother never uttered a word about this to me. Actually, I took this as a reproval for having deviated from the narrow script we were all expected to follow in the context of casual encounters with fellow commuters. Someday I might get to know him well enough to have earned a true answer to my question. But in the context of a beer soaked conversation in the bar car? I was clearly out of line.

I extracted myself with as much grace as was possible for a kid who’d just had all his hayseeds exposed and found my way back to one of the coach cars, settling into the familiar binary pattern of the blue and maroon vinyl. For the remainder of the ride, I gazed out the window and took in the curiously compelling rural/industrial landscape that seems to flank all the tracks on the Harlem, Hudson and New Haven Lines. I also glanced occasionally at the throng of commuters, incrementally thinning with every passing stop, all of them looking superficially like the Jesuit, but without that third rail of anger that the Foster’s elicited from him. It was noticeable to me then, and I’ve thought of it often since, that I wasn’t really knocked back on my heels at the Jesuit’s rough comment. I didn’t puff out my chest  in defense of my mother’s honor, I didn’t crumble under the attempted assault on my manhood, and my cheeks didn’t display their annoyingly dependable blushed tone of “humility mauve.” Instead, I chose to accept his point, employing a rare objectivity in my otherwise emotional youth.

The Metro-North railcars where most of my memories are stored are lurching toward that great rail yard in sky. There was an introduction several years ago of a new model that will soon replace the entire old fleet. The new M7 fleet, while stylishly European, sadly lacks that northeast corridor-Grand Central grime charm that we all depend upon to get our bearings at the start of each commute.  With the new antiseptic fleet being gradually phased in, there are fewer opportunities for me to look at a train interior and be reminded of my earlier train riding days, when I would glance out my window in a winsome way at rural/industrial landscapes, or receive life lessons from foul mouthed Jesuits with alcohol dependence.

Before the complete fleet changeover, I want a few more rides in which to watch the great masters of midtown disembark. I want to witness, just a few more times, their wake of dog eared newspapers and expanding pattern of previously occupied blue and maroon seats. And before I presume to become overly familiar with any of them, I’d relish the chance to be reminded by someone, be they a drunken Jesuit or not, that this ride across the Hudson Valley landscape is not something that only becomes fully realized by becoming overly familiar with fleeting acquaintances. I want them to remind me that this is a tableau, a timeless visual feast for our eyes, powerfully reaffirming our sense of place. And if we manage to avoid questions too probing and personal to our fellow riders, it will last decades on end, a lifetime.
Photo courtesy of P. Smith