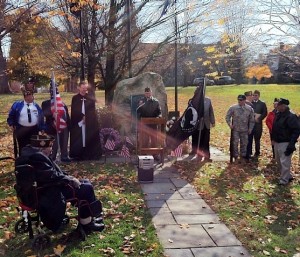 Across the country events underscore vets search for jobs

As they faithfully do every year, members of the local veterans organizations, along with a small group of citizens, gathered at the war memorial on the St. Mary-in-the- Highlands green, in Cold Spring at 11 a.m., to commemorate the service of both past and present members of the country’s armed services. First designated Armistice Day by President Woodrow Wilson for when the guns of World War l went silent on the eleventh hour of the eleventh day of the eleventh month of 1918, the day we now know as Veterans Day has an added numerical poignancy in this year of 2011.

The brief ceremony featured a prayer of remembrance by St. Mary’s Rector Fr. Shane Scott-Hamblen and a reading of the names of local service members who died in the different wars since World War l by Roger Kepple, a Vietnam veteran. Many of the names resonate the history of Philipstown with their rueful familiarity. The day is also a melancholy reminder that in 1918 the world aspired to an end to war as a way to resolve differences among nations. 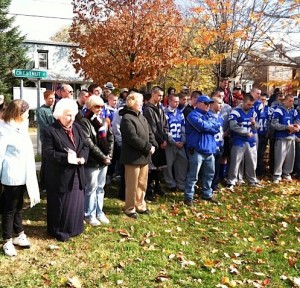 The presence of the young men from the Haldane football team, who marched as a group to the ceremony, underscored thoughts of those men and women just a few years older serving in harm’s way in Iraq, Afghanistan and undisclosed locations around the globe. Across the country, yesterday, President Obama and other political leaders marked the day bringing renewed attention to the growing problem of unemployment, higher than the national average, among veterans returning from the these battlefields. For those aged 18-34, the rate is 16.6 percent as against the 9 percent for the general population.

For more on advocacy on behalf of Iraq and Afghanistan veterans click here.

Photos and video by K.E.Foley